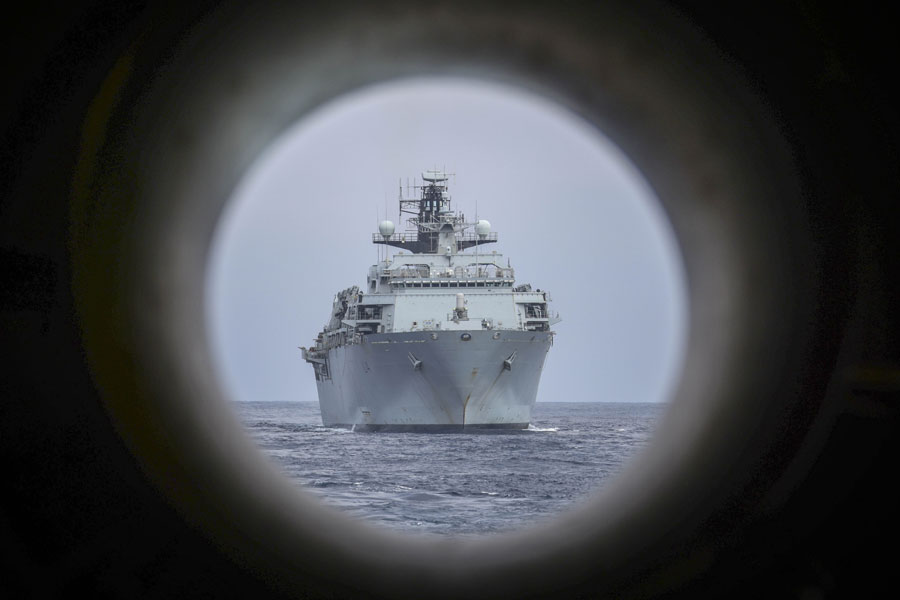 The Royal Navy has completed a major European deployment from the North Sea to the Mediterranean, strengthening bonds with NATO allies.

Embargoed News, Whale Island, 10 December 2022: The Royal Navy has completed a major European deployment from the North Sea to the Mediterranean, strengthening bonds with NATO allies.

Nine warships, F-35B Lightning jets, helicopters and thousands of sailors and Royal Marines Commandos were part of Operation ACHILLEAN. The operation concluded on Saturday (10 December) as HMS Albion’s amphibious task group returned to the UK after three months operating in Europe in a demonstration of NATO unity.

Captain Marcus Hember, HMS Albion’s new commanding officer who took over from Captain Simon Kelly in Gibraltar earlier this week, said: “It is remarkable what the task group achieved in these busy months.

“It is a testament to the skill, hard work, and dedication of each sailor and Commando.

“The task group has visited more than a dozen countries, forging closer links with our allies and partners. I have no doubt that the ship’s company will continue to deliver to the end of this deployment and in the year ahead in 2023.”

RFA Argus deployed with an air group of Merlin and Wildcat helicopters from Commando Helicopter Force’s 847 and 845 Naval Air Squadrons. They recently played a key role in boarding operations training alongside Royal Marines from 47 and 42 Commando and the Algerian Armed Forces. Along the North African coast, HMS Albion became the first Royal Navy ship in eight years to visit Tripoli in Libya, before visiting Cyprus where Royal Marines of 45 Commando led amphibious operations alongside the British Army.

The task group then visited western Turkey to host members of NATO’s Land Command and carry out flying operations with the Turkish Air Force and naval exercises with their landing ships. Returning to North Africa, HMS Albion was in Alexandria in Egypt to mark the 80th anniversary of the Second Battle of El Alamein in the Second World War.

Heading into the Adriatic Sea, the task group worked closely with NATO’s leading Mediterranean security task force, Standing NATO Maritime Group 2, and the US Navy Carrier USS George H. W. Bush before heading into Montenegro. There, the task group moved on to Exercise LION STRIKE with one of NATO’s newest members, Montenegro, which joined the strategic alliance in 2017. Merlin and Wildcat helicopters from 845 and 847 Naval Air Squadrons, as well as Royal Marines from 45 Commando, worked with the Montenegrin Armed Forces on land, at sea and in the air. LION STRIKE culminated in HMS Albion hosting the country’s Prime Minister, Dritan Abazović, for a demonstration of boarding, and search-and-rescue operations.

Weapons Engineer Kieran Colville said: “Not only was the chance to share expertise with Montenegro’s armed forces a professional highlight of the deployment, but the country itself was simply stunning, and the people incredibly welcoming.” Meanwhile, HMS Defender carried out four days of naval warfare exercises before heading to Split, Croatia, later working with Croatian warship Vukovar. Further defence engagement followed, with the task group visiting Valletta, Malta; Tunis, Tunisia; and Souda Bay in Crete.

In Greece, Type 45 Defender trained in air defence and carried out exercises in surface and electronic warfare with Greek frigate HS Elli after a port visit in Piraeus where she hosted dignitaries and held demonstrations on board. In late November the task group carried out electronic warfare exercises with NATO allies and partners in the Gulf of Taranto, Italy, before a five-day stop in Civitavecchia to deepen defence relationships and allow some downtime for the ship’s company in Rome.

During their time in Italy, HMS Albion hosted and accompanied His Majesty’s Royal Marines Band Scotland, who performed at various locations across the Eternal City including The Colosseum and the British Ambassador’s residence. Defence Secretary Ben Wallace also visited the ship during his visit to Italy to meet Italian counterpart Guido Crosetto.