UK Statement on the UN Peacekeeping Mission in Mali 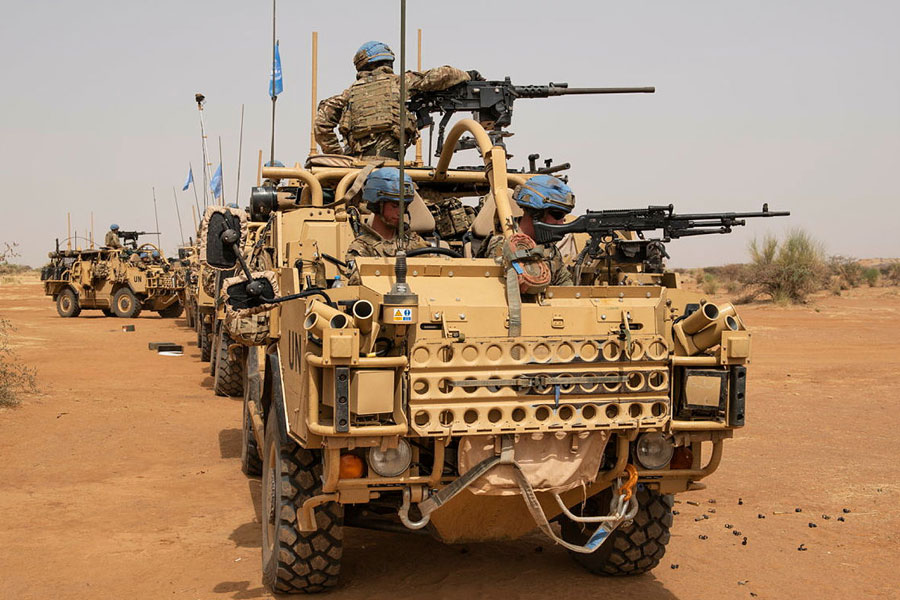 UK Minister for the Armed Forces, The Rt Hon James Heappey MP, makes a statement on the UN Peacekeeping Mission in Mali.

Whitehall, 14 November 2022: UK Minister for the Armed Forces statement in the House of Commons on the UN Peacekeeping Mission in Mali:-

West Africa is an important region for the United Kingdom and our allies across Europe. And the UK is strongly committed to supporting the UN to deliver its peacekeeping commitments around the world. That is why since 2018 we had been supporting the French-led counter-terrorism mission in Mali with CH-47 Chinook helicopters under Operation BARKHANE and more recently, since 2020, through the deployment of a Long Range Reconnaissance Group as part of the UN’s MINUSMA peacekeeping mission.

The House will be aware, however, that in February, President Macron announced the drawdown of French troops in Mali and was joined in that announcement by all other European nations, as well as Canada, that were contributing to the French-led Operations BARKHANE and TAKUBA. In March, Sweden announced that it would be leaving the UN’s MINUSMA mission.

Today, Mr Speaker, I can announce that the UK contingent will also now be leaving the MINUSMA mission earlier than planned.

Mr Speaker, we should be clear that responsibility for all of this sits in Bamako. Two coups in three years have undermined international efforts to advance peace. On my most recent visit last November, I met with the Malian Defence Minister and implored him to see the huge value of the French-led international effort in his country.

However, soon afterwards, the Malian Government began working with the Russian mercenary group Wagner and actively sought to interfere with the work of both the French-led and UN missions. The Wagner group is linked to mass human rights abuses. The Malian government’s partnership with Wagner group is counterproductive to lasting stability and security in their region.

Mr Speaker, this Government cannot deploy our nation’s military to provide security when the host country’s Government is not willing to work with us to deliver lasting stability and security.

However, our commitment to West Africa and the important work of the UN is undiminished. We’ve been working closely with our allies to consider options for rebalancing our deployment alongside France, the EU and other like-minded allies. On Monday and Tuesday next week, Mr Speaker, I will join colleagues from across Europe and West Africa in Accra to co-ordinate our renewed response to instability in the Sahel.

This will be the first major gathering in support of the Accra Initiative – a West African-led solution focussed initially on preventing further contagion of the insurgency into Cote d’Ivoire, Ghana, Togo, Benin and Niger and tackling the growing levels of violence in Burkina Faso as well as Mali – making this a very timely conference indeed.

And of course, Mr Speaker, it is not just the UK military that will remain committed in West Africa – the UK will continue its commitment to Mali and the Sahel through our humanitarian, stabilisation and development assistance, working in close coordination with partners.

Nor, Mr Speaker, is this a reduction in our commitment to the United Nations. The UK remains an important contributor of troops through Operation TOSCA in Cyprus, and staff officers across several missions, and provide training to around 10,000 military, police and civilian peacekeepers from a range of countries annually. We remain the fifth largest financial contributor and will continue to drive reform in New York. Indeed we are working with New York on developing a pilot – to be delivered through the British Peace Support Team based in Nairobi – to develop the capacity of UN troop contributing nations across Africa.

Mr Speaker, we will of course co-ordinate with allies as we drawdown from Gao and have been sharing our plans with them over recent months. The Army will be issuing orders imminently to reconfigure the next deployment to drawdown our presence. We are leaving the MINUSMA mission earlier than planned and are, of course, saddened by the way the Government in Bamako has made it so difficult for well-meaning nations to remain there.

The work of our troops has been outstanding, and they should be proud of what they’ve achieved there. But through the Chilcott Report and our wider experience in Iraq and Afghanistan, we – like so many allies – are clear that the military instrument should not be deployed on counterinsurgency or countering violent extremism missions unless there is a clear and compelling commitment towards political progress.

We will work quickly with allies in the region and across Europe to support the Accra Initiative to deliver security, stability and prosperity in West Africa. Our commitment to that region is undiminished.