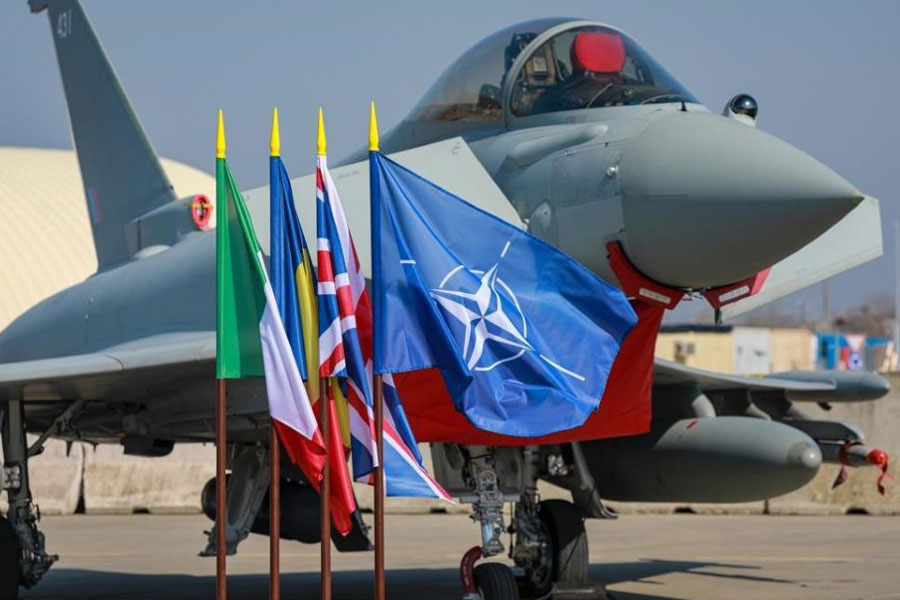 Press Release, Whitehall, 08 April 2022: Two additional RAF Typhoon jets will join four already in Romania. Together with eight Typhoons stationed in Cyprus, this uplift will bring the total number of RAF fighter jets stationed in South-Eastern Europe to 14. The two additional jets are expected to remain in Romania until the end of July.

Defence Secretary Ben Wallace made the announcement on a visit to Mihail Kogalniceanu Airbase in Romania alongside Chief of the Air Staff, Air Chief Marshal Sir Mike Wigston, where they met Romanian officials and observed UK jets taking part in NATO’s Air Policing mission. The announcement reaffirms the UK’s commitment to our bilateral defence relationship with Romania.

Defence Secretary Ben Wallace MP said: “The UK and Romania are steadfast in the defence of our shared values and commitment to NATO’s collective security, in the air, at sea, and on land.

“Together we are supporting Ukraine in its defence against Putin’s illegal invasion and I pay tribute to Romania’s generosity providing shelter for the tens of thousands of innocent civilians fleeing this horrific conflict.”

Air policing is a purely defensive operation and a permanent NATO mission which began in 1961 during the Cold War. The mission ensures the security and integrity of all NATO Alliance members’ airspaces. Airspace is monitored by operations centres and, where it is assessed that an interception is required, NATO aircraft can be scrambled as part of a Quick Reaction Alert. The UK supports Romania by augmenting its own capabilities.

Chief of the Air Staff, Air Chief Marshal Sir Mike Wigston said: “Our air forces are at the vanguard of NATO’s collective security, united in our shared determination to protect our nations.

“From the North of Norway to the Black Sea and Mediterranean, aircraft are airborne, alert and ready to defend against any threat to NATO territory or populations.”

The Defence Secretary and Chief of the Air Staff were invited to the Op BILOXI Ceremony hosted by the Romanians at the airbase. The ceremony saw jets take part in a scramble exercise and flypast, showcasing NATO’s ability to rapidly respond to incursions to Allied airspace. Ben Wallace and Sir Mike Wigston met with Romanian Defence Minister Vasile Dincu and Chief of the Defence Staff, General Daniel Petrescu. They discussed the defence relationship, regional security and the war in Ukraine, and further strengthening the UK-Romania bilateral relationship.