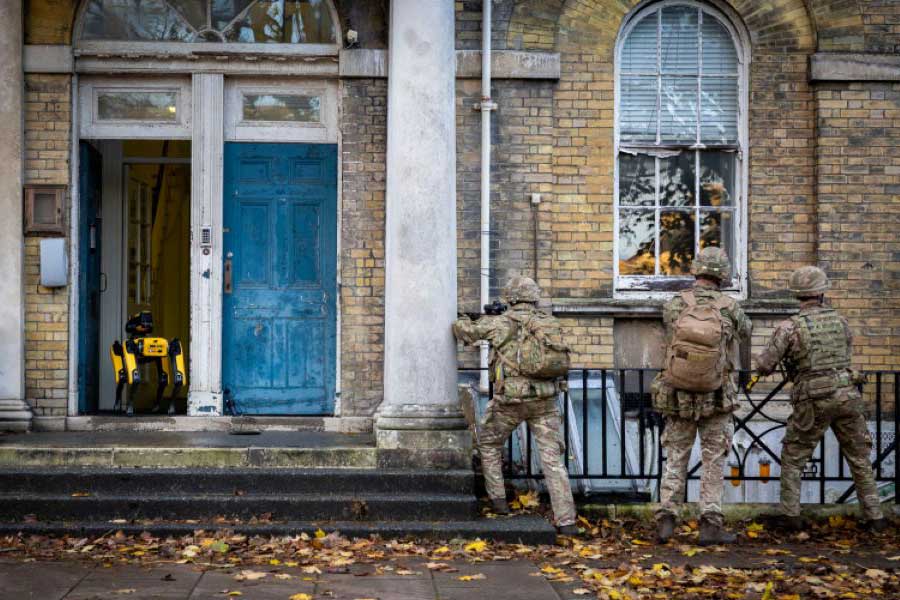 Press Release, Porton Down, 08 December 2022: Experts from the Defence Science and Technology Laboratory (Dstl) have played a key role in supporting the Army Warfighting Experiment Sustain and Protect (AWE S&P) exercise at His Majesty’s Naval Base Portsmouth (HMNBP). Dstl scientists from a wide range of specialisms including sensing, platform survivability, human science, autonomy and power deployed to operate and assess a variety of technologies such as novel robotics and data fusion.

The purpose of AWE S&P is to identify current, emerging and novel technologies from industry partners to inform current and future equipment programmes and encourage closer collaboration across government, allies, partners and industry to make the Army more lethal, agile, resilient and persistent. AWE gets these technologies into the hands of the user and provides the opportunity to develop sufficient evidence to:

The Portsmouth exercise is part of the second phase in the AWE Urban series which focuses on how the Army can sustain and protect a Brigade (and below) force in the urban environment through the utilisation of intelligent logistics, novel medical extraction and autonomous vehicle extraction. It also aims to assess the implementation of physical and non-physical barriers which encompass counter-uncrewed air systems (C-UAS) and counter-cyber and electromagnetic activities (C-CEMA) to ensure automated platforms are survivable on the modern battlefield in a c2030 timeframe.

Dstl experts were involved in the down selection of the 159 systems originally submitted by industry against AWE S&P specific hypotheses. Throughout the process more than 20 Dstl staff worked closely to support QinetiQ, DE&S and Army Trials and Development units (TDUs) in their assessments of systems.

Ultimately, approximately 20 technologies progressed to the final stage, the integrated experimentation assessment, at Portsmouth Naval Base in November 2022. In this simulated live fire event, troops from 2 YORKS and 3 PARA, as well as allied partners from elements of the Dutch Army’s Robotics and Autonomous Systems Unit and the US Army Experimentation Force used the industry technologies in representative platoon level force-on-force urban scenarios. Staff observed the use of these technologies in the activities, providing feedback to military suppliers and AWE organisers, helping guide the development of future capabilities for Army use in for Urban Operations.

Lt Col Arthur Dawe, Commanding Officer, Infantry Trials and Development Unit, said: “Dstl is constantly seeking to improve the effectiveness of the UK’s armed forces by identifying and assessing novel technologies. These new technologies will offer operational advantage in a number of areas, such as improved sensing to identify and track adversaries, or through increasing the speed and compatibility of data, enabling commanders to make faster and more impactful decisions.”

Dstl supports trials and experimentation for all of the armed forces including multi-national exercise such as Project Convergence and the Contested Urban Environment.