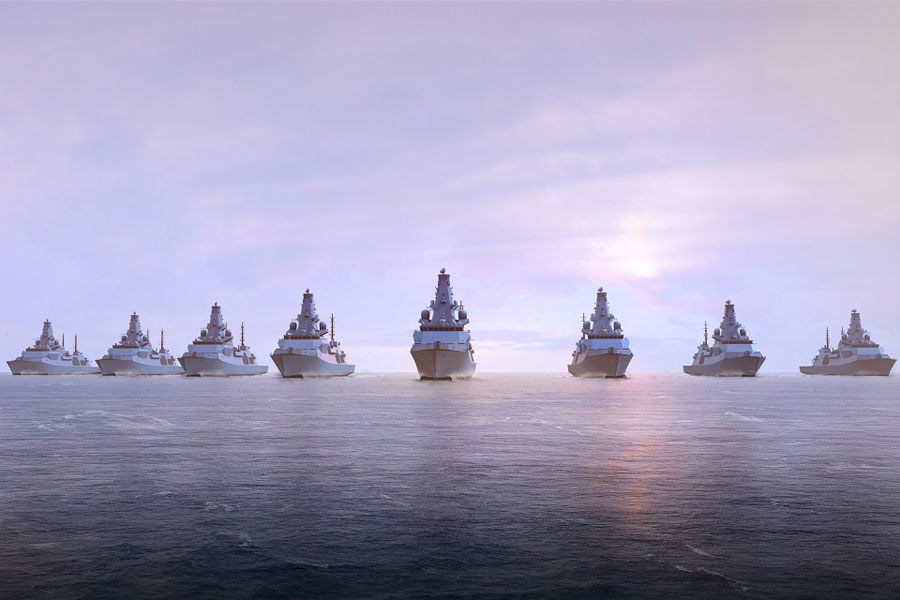 Press Release, Whitehall, 15 November 2022: A British shipyard has been awarded a £4.2 billion contract to build the second batch of Type 26 frigates for the Royal Navy.

Delivering on ambitions laid out in the National Shipbuilding Strategy Refresh earlier this year, the contract awarded to BAE Systems will support 1,700 British jobs over the next decade at BAE Systems sites in Govan and Scotstoun, Glasgow. As part of the contract, BAE Systems has committed to invest £1.2 billion in the UK supply chain, supporting a further 2,300 jobs with more than 120 suppliers all over the UK.

Leading the Royal Navy’s anti-submarine warfare surface fleet, the five new City-class ships – HMS Birmingham, HMS Sheffield, HMS Newcastle, HMS Edinburgh and HMS London – will join the first three T26s already in build at Govan – HMS Glasgow, HMS Cardiff and HMS Belfast. Construction of all eight frigates is expected to be completed by the mid-2030s, with the first, HMS Glasgow, entering service by the end of 2028.

Defence Secretary Ben Wallace said: “We are investing in our fleet to ensure our Royal Navy maintains its world-leading capability to protect and defend our nation at sea. This design has already been successfully exported to Australia and Canada, its already proved itself as a world-class maritime capability, securing thousands of UK jobs and strengthening alliances with our allies.

“Supporting thousands of high-skilled jobs in Scotland, and more across the wider UK supply chain, this contract will continue to boost our British shipbuilding industry, galvanising the very best of British engineering, manufacturing and design.”

Replacing the bulk of the retiring Type 23 fleet, the Type 26 frigates will be flexible and advanced warships with the primary purpose of anti-submarine warfare, protecting the UK’s continuous at-sea nuclear deterrent and Maritime Strike Group. At just under 150m long – around the length of three Olympic swimming pools – and with a top speed of more than 26 knots and a range of more than 7,000 nautical miles, the vessels will be capable of countering piracy and delivering humanitarian aid and disaster relief.

BAE Systems Chief Executive Officer, Charles Woodburn, said: “This contract secures a critical UK industry and allows us to build on our long history of shipbuilding on the Clyde as we continue to deliver cutting-edge equipment to the Royal Navy into the next decade. It underpins the ongoing investments we’re making in the skills, infrastructure and technologies needed to stay at the forefront of the maritime sector and to support the UK Government’s National Shipbuilding Strategy.

Improving build efficiency, BAE Systems has submitted a planning application for a new 175 metre long, 85 metre wide Shipbuilding Hall at Govan, which will allow two frigates to be built simultaneously under cover. This investment will be a major factor in the final five City-class ships costing less and being delivered faster than previous vessels. In the manufacturing supply chain, £248 million worth of work has been committed to Scotland, with £16 million to Wales and £749 million to England.

Vice Admiral Paul Marshall, DE&S Director General Ships, said: “The award of the T26 Batch 2 manufacture contract is another key milestone in the United Kingdom’s shipbuilding programme, reaffirming our commitment, alongside our industrial partners, to deliver a highly effective anti-submarine frigate fleet for the Royal Navy.”

The vessels are designed to reduce environmental impacts, and are fitted with features – including a hydrodynamically designed hull – to optimise fuel efficiency and a diesel engine emissions abatement, which reduces nitrogen oxide exhaust. Steel will be cut on the first of the next five vessels, HMS Birmingham, this winter, marking the start of the Batch 2 build phase.