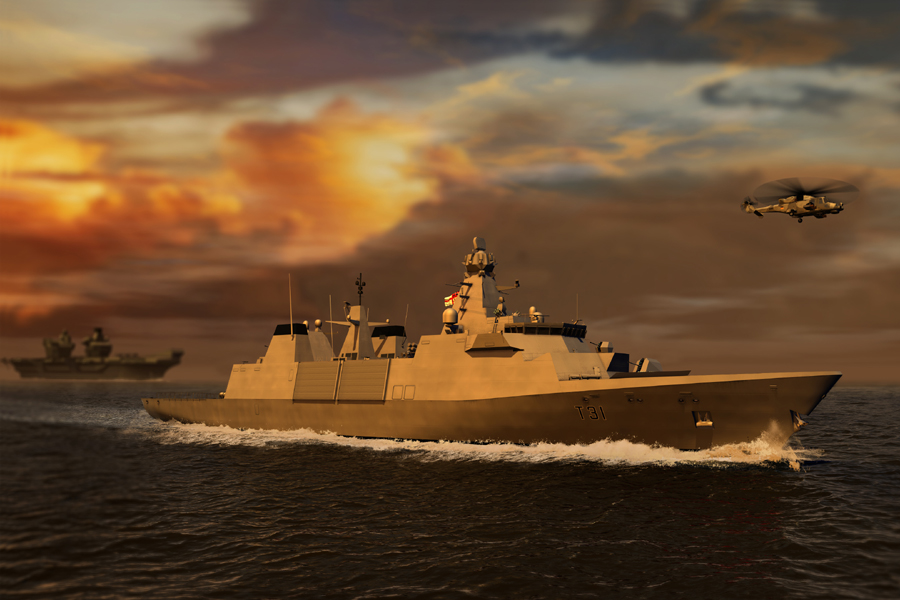 Construction of the Royal Navy’s new Type 31 frigates begins in Scotland as the keel of HMS Venturer is laid in a ceremony in Rosyth dockyard.

In the brand-new assembly hall in Rosyth dockyard in Scotland, the keel of HMS Venturer was laid in a ceremony which blended cutting-edge shipbuilding with naval history. The construction of the fleet will support around 2,500 jobs both at Babcock and nationally through the UK supply chain, as well as creating 150 additional apprenticeships.

The keel laying is the formal moment of construction beginning for the ship, following September’s steeling cutting for the Inspiration-class Type 31 frigate. Over the coming months it will rise a 6,000-tonne ship and, alongside it from next year, the second ship in the class, HMS Active. The Venturer Hall is large enough to allow two frigates – each longer, wider and heavier than the Type 23 warships they replace – to be constructed side by side.

“Today’s keel laying ceremony connects Royal Navy tradition with 21st century shipbuilding,” said Rear Admiral Paul Marshall, Director Navy Acquisition for the Royal Navy. “The short seven months between HMS Venturer’s first steel being cut and her keel being laid demonstrates the continuing pace of the Type 31 programme building on cutting edge processes, skills and facilities in Scotland and the UK which should ensure that the Royal Navy gets the capability it needs on time.”

The construction of the Type 31 frigates is part of a wider investment in UK yards and industry under the Government’s National Shipbuilding Strategy of more than £4 billion over the next three years alone. The money spent by the MoD alone directly supports around 25,000 jobs across the United Kingdom, plus some 20,000 jobs supported indirectly.

Defence Procurement Minister Jeremy Quin said: “The keel laying is a hugely important milestone in the build of any new ship and particularly for HMS Venturer, being the first of a new frigate class for the Royal Navy. It is testament to the work of Babcock UK that they have reached this stage so soon after September’s steel cutting.

“We look forward to more Type 31 milestones at Rosyth dockyard, demonstrating the Government’s commitment to UK shipbuilding and to modernising the Royal Navy.”

The keel was placed upon a coin minted especially for the occasion – in keeping with Royal Navy tradition – watched by representatives from the Navy and the shipbuilding industry. The special coin – designed by seven-year-old Josh Duffy, whose mother works for Babcock, the firm constructing HMS Venturer – is said to bring the ship and her crew luck.

Each ship is larger than the current Type 23s they replace but slightly shorter and lighter than HMS Glasgow and the seven other planned Type 26 frigates also being built for the fleet in Govan, just 35 miles away. The 26s will focus on anti-submarine warfare – like eight Type 23s fitted with towed arrays – leaving the 31s to carry out patrols wherever they are needed, from conducting counter-terrorism/drug smuggling patrols in the Indian Ocean to helping out in the aftermath of a disaster.

The 31s have been designed and are being built for the Royal Navy, but with one eye firmly on the export market; the Polish and Indonesian Navies have selected the design for their future fleets. Each ship is equipped with three Pacific 24 boats, – crucial for board-and-search / counter narcotics work – a 57mm gun and two 40mm secondary guns, Sea Ceptor air defence missiles – also fitted to Type 23 and 26 frigates – with off-the-shelf sensors and computer systems. And the flight deck can host helicopters up to the size of a Chinook, although more typically Royal Navy Merlins and Wildcats. A typical crew will be just over 100, but with space – notably for Royal Marine detachments – for up to 187 personnel on board.

All five ships being built take their names from previous predecessors which wrote their name large in naval annals thanks to inspirational actions and deeds. In Venturer’s case, she’s named after the first submarine to torpedo and destroy another boat while both craft were submerged. After Venturer and Active come HMS Formidable, Bulldog and finally Campbeltown.