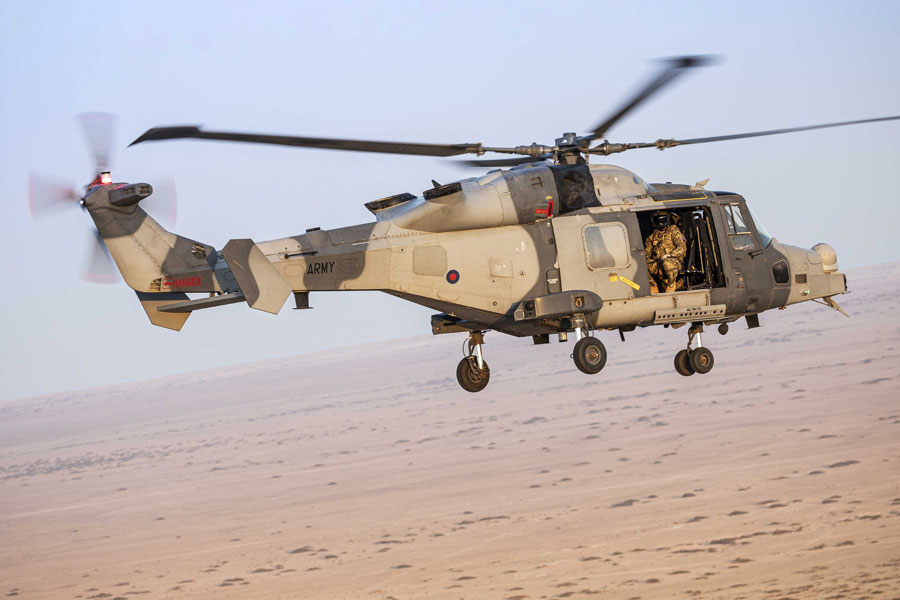 A five-year £360 million support and training contract for the Wildcat helicopter has been renewed with Leonardo Helicopters UK.

News Release, Whitehall, 06 April, 2022: A five-year £360 million support and training contract for the Wildcat helicopter has been renewed with Leonardo Helicopters UK. A total of 340 jobs will be sustained at RNAS Yeovilton and Leonardo with jobs also supported at second and third-tier suppliers including Morson Group and Light Helicopter Turbine Engine Company.

Defence Minister Jeremy Quin said: “Wildcat helicopters play a vital role in supporting our Armed Forces through reconnaissance, protection and transport. I am delighted they will continue to receive high-quality technical support and training from Leonardo UK.”

The Wildcat helicopter is a key element of the UK’s Carrier Strike Group (CSG), providing a multi-role attack capability as it operates from the frigates and destroyers that accompany the Queen Elizabeth-class aircraft carriers. Able to strike with a range of weapons including missiles, torpedoes and guns, during the maiden deployment of CSG21 last autumn, the new Martlet missile system achieved initial operating capability with a successful test firing from an embarked Wildcat HMA Mk2 in the Bay of Bengal.

Meanwhile, the Wildcat AH Mk1 performs a range of important tasks for the Army including reconnaissance, command and control, transportation of troops and equipment, as well as force protection with its heavy and general-purpose machine guns. Flexible, agile and adaptable, as part of the 1st Aviation Brigade Combat Team, the Wildcat AH has led the way during recent deployments to Oman and Estonia in 2021, and Lithuania in 2022. Its capability will be significantly increased over the next few years with the addition of a secure Tactical Data Link, further enhancing connectivity across the battlefield.

“The third pricing period of WIST will ensure the frontline personnel of the Royal Navy and British Army continue to be expertly training, supported and equipped to keep our nation and allies around the globe safe.”

Wildcat was the first UK military helicopter to enter service with a fully integrated support and training solution at the outset, delivering serviceable aircraft to operational units.