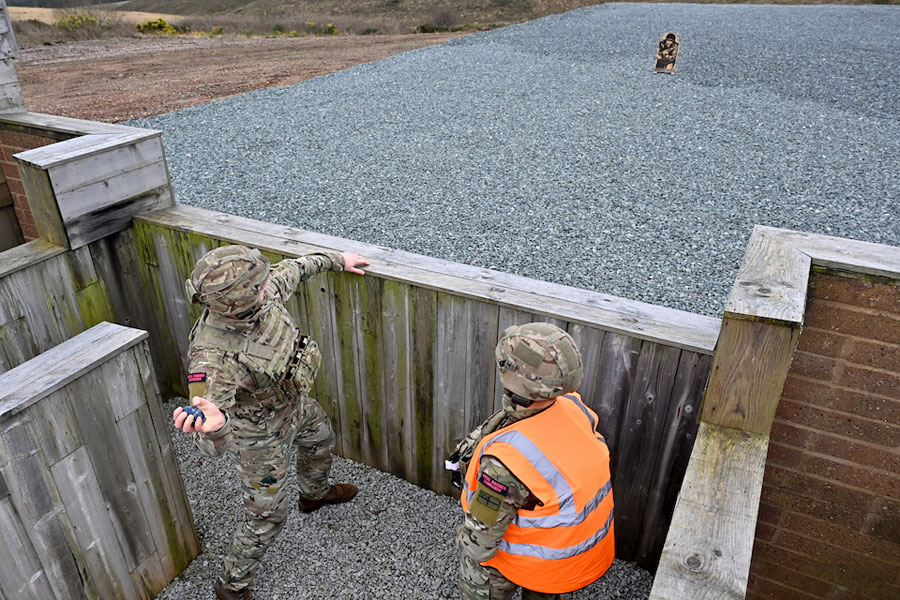 Working together with landowner Clinton Devon Estates, the Pebblebed Heaths Conservation Trust which manages the land, Natural England and Landmarc Support Services (Landmarc), the purpose-built range has been brought back up to an operational standard so that throwing live grenades can begin once again.

Rich Carter, the local DIO Training Safety Officer for the Woodbury Common Training Area, said: “Good teamwork and collaboration have enabled us to complete this work and it will be great to see this important facility back in operation. Training facilities like Colaton Raleigh Common are crucial to progressive military training and we are pleased to be able to provide this much needed facility to our users.”

The refurbishment work was delivered by Landmarc, the DIO’s industry partner for the management and operation of the UK Defence Training Estate. It involved the full excavation of the old range floor. Repairs had been made to the perimeter fencing and the replenishment of 500 tonnes of specialist stone. This had to be carefully researched and approved by Natural England to ensure it was ecologically compatible with the surrounding heathland, as well as being able to absorb the impact of explosions from the grenades.

Chris Ockleton, Regional Operations Manager at Landmarc, said: “Strong collaboration was critical to our ability to bring this range back into operational use. Working with all stakeholders, we were able to identify a particular type of stone in Wales that met the stringent environmental requirements of Natural England as well as the MoD regulations to provide a safe place to train. We are pleased that the dedication and commitment of our collective teams has resulted in the reinstatement of this important training feature for our armed forces.”

The range had been in use since the 1950s and was closed in 2015 due to weather damage and erosion. It will provide a much-needed facility for military units based in the South West and will be primarily used by recruits from the Commando Training Centre at Lympstone, as well as by other defence users.

Lieutenant Colonel Chris Samuel RM, Commanding Officer Support Wing of the Commando Training Centre Royal Marines, who officially opened the new facility, said: “We are delighted to see the grenade range at Woodbury Common reopen. It will allow our Royal Marines to train safely and more realistically, whilst building their skills, experience and confidence before joining the United Kingdom’s Commando Forces.

“Previously they have had to travel to ranges in Wiltshire and South Wales to train so the reopening of the range will help us to use training time more efficiently as well as reducing costs and the carbon footprint of users, enabling the delivery of a more sustainable estate.”

During the work care was taken to minimise the impact of the range and ensure wildlife was protected. Situated within a 1,100-hectare network of linked heaths, the area is home to more than 3,000 species of flora and fauna and is protected by national and European designations. Due to the site’s sensitivity, the MoD worked closely with Landmarc, Clinton Devon Estates, the Pebblebed Heaths Conservation Trust and Natural England, who provided national level ecological guidance to ensure that the work carried out did not adversely affect the site.

Dr Sam Bridgewater, Head of Wildlife and Conservation for Clinton Devon Estates, said: “The Royal Marines have a long history of training on the Pebblebed Heaths with their activities controlled through a licence to ensure they are compatible with the site’s many conservation designations. Every recruit that passes through training is taught about the site’s environmental importance and sensitivities.”

Kim Strawbridge, Reserves Manager for the Pebblebed Heaths Conservation Trust, added: “Military training on the heathland dates to the Second World War when Dalditch Camp was a major military encampment. We continually monitor the species of key conservation significance on the Pebblebed Heaths annually, including nightjar and Dartford warbler, and despite the presence of the range these have continued to thrive since the Heaths site was designated for conservation in the 1990s.”

Live grenade training will resume this month and will take place on weekdays (the facility may be in use from 8am to 7pm, however, between 10am and 3pm is the normal live throwing widow. Only by exception and for urgent operational necessity would the site be used at weekends). People visiting the Heaths will be able to check future training dates and times on the GOV.UK website on the Straight Point Ranges and Woodbury Common Grenade Range firing times page. The dates will be posted before activity is scheduled to take place.

The legal conditions for this type of military training activity are set out in the Ranges Licenses and The Woodbury Common Range Byelaws, copies of which are published on noticeboards positioned on all approach routes to the Range Danger Area.