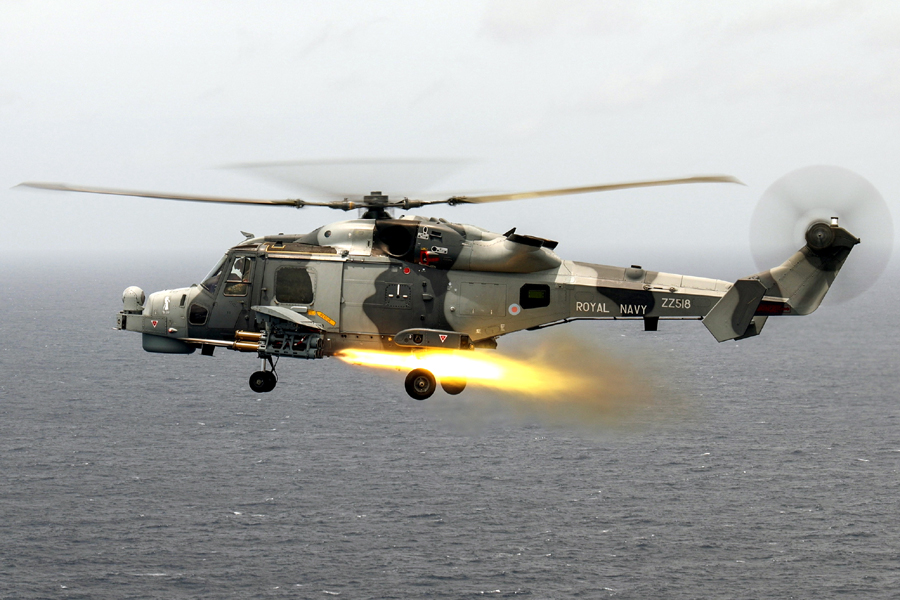 During operations in the Pacific Ocean with the UK Carrier Strike Group, HMS Defender’s Wildcat helicopter of 815 Naval Air Squadron fired the Martlet lightweight missile at an inflatable target in the sea – known in the navy as the big red tomato. It is the first time this type of missile has been launched on frontline operations by the Royal Navy after rigorous testing at ranges off the UK coast by the Yeovilton-based Wildcat Maritime Force last year.

In 0.3 seconds, the missile detached from the Wildcat HMA Mk2 helicopter, accelerating to one and a half times the speed of sound towards its target. The purpose of the missile system is to add another layer of protection around the Royal Navy’s aircraft carriers, with the Wildcats able to carry up to 20 of the laser-sensor missiles that can be used against stationary and moving targets.

Captain James Blackmore, Carrier Strike Group’s Air Wing Commander, said: “Martlet is a new air to surface lightweight multi-role missile recently introduced into service for the Wildcat helicopter and provides an offensive and defensive capability against small boats and maritime targets that may pose a threat to the Carrier Strike Group.

“The Wildcat is a phenomenally versatile aircraft and the inclusion of up to 20 missiles on each of the four embarked aircraft adds yet another potent capability to the Air Wing and the Carrier Strike Group.

“This first firing during an operational deployment not only gives confidence in the end to end weapon kill chain but also offers an overt demonstration of one of the many strike capabilities provided by the Air Wing from within the Task Group.”