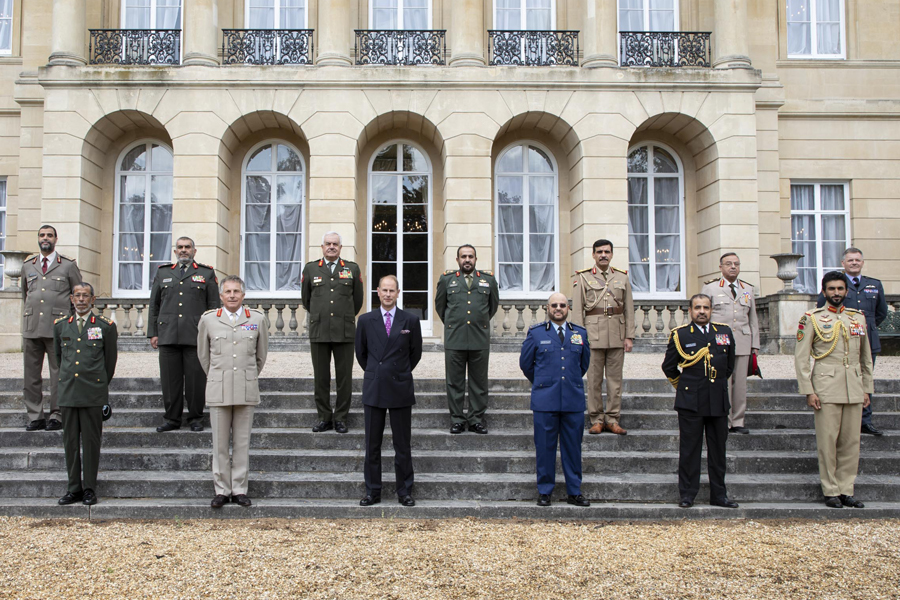 HRH The Earl of Wessex with General Sir Nick Carter and Defence Chiefs from the Middle East on the steps of Lancaster House,5 June 2021 [Crown Copyright: Sgt Jim Wise]

General Sir Nick Carter, CDS, hosted a meeting of the Dragon Group at Lancaster House with partners from the Gulf and wider Middle East region.

The Dragon Group, named after its first meeting aboard HMS Dragon in 2018, is an annual meeting of Defence Chiefs from the Middle East. The UK is among the closest Defence partners of Dragon Group members. Global Britain is ready to work with our allies around the world to secure a better, safer world. Today’s meeting focused on regional trends as well as new capabilities to combat our shared threats.

Chief of the Defence Staff, General Sir Nick Carter said: “Today’s Dragon Group meeting of the military leaders from the GCC, Egypt, Iraq and Jordan was a tremendous opportunity to discuss common challenges, share best practice and take a view on how we chart a common approach to the future.

“The UK Armed Forces hugely value our partnerships in the Middle East and we stand with our friends in seeking to create a stable and prosperous region.”

Our security relationships in the Gulf run deep. We routinely have over 1,000 military personnel in the region, in addition to aircraft and ships. Our Defence partnerships help us mount counter-terrorism, anti-piracy and counter-smuggling operations that keep everyone safe.

The UK’s Carrier Strike Group will soon enter the Middle East to further bolster our commitment to regional security, including carrying out operations against Da’esh from Britain’s flagship aircraft carrier HMS Queen Elizabeth.

HRH The Earl of Wessex attended a lunch with the Dragon Group guests. Members of the Dragon Group include Bahrain, Egypt, Iraq, Jordan, Kuwait, Oman, Qatar, Saudi Arabia and the United Arab Emirates. Today’s meeting was held in line with COVID-19 regulations.

CDS, Chief of the Defence Staff, Defence Chiefs, Dragon Group, Featured, HRH The Earl of Wessex, Middle East
You may also like