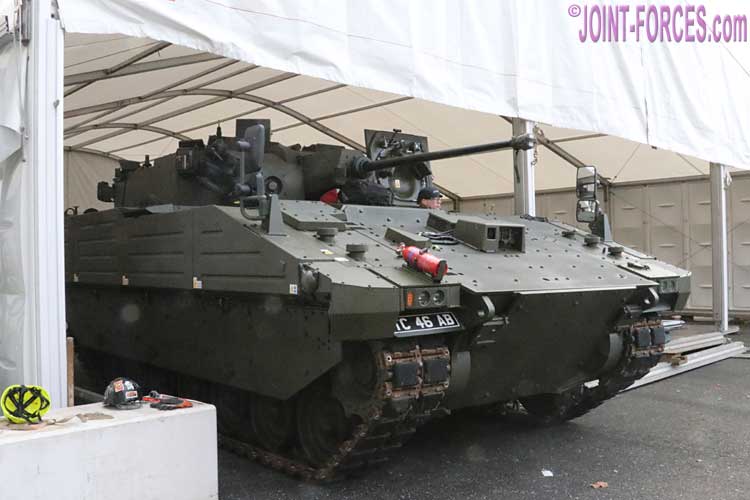 Billed as ‘The World’s Largest Dedicated Armoured Vehicles Conference’, the two days of mainstream International Armoured Vehicle (IAV) conference sessions, with speakers and guests from as far afield as South America and The Antipodes, are this year preceded by Platform Support and Retrofit & In-Service Support briefings on the Monday and followed by an Unmanned Ground Vehicles Conference on the Thursday.

While the Monday sessions were underway a large indoor exhibition hall was set up along with a small Vehicle Zone in a marquee outside. In between background briefing and updates on topics as diverse as the US Army Stryker and Vehicle Protection, the FNSS–Thales OTTER Wet Gap Crossing System and the Role Of Armour In Estonia’s National Defence 2022 Plan, then a series of three specialist briefings on the ARTEC BOXER, I grabbed the opportunity to photograph the armour in the Vehicle Zone before the construction team finished the raised floor and the exhibitors moved in the rest of their kit. As can be seen from the photos, AJAX, BOXER and JLTV will be the centrepieces.

The conference proper gets underway at 08:00 in the morning with a Keynote Address from the Deputy Commander of NATO Allied Land Command and the packed main programme for the next two days, with at times Survivability, Firepower and Mobility Streams all running concurrently, is bound to keep me seriously occupied; especially tomorrow, which is scheduled as an eleven hour working day. However as and when possible I will try to add occasional updates to JOINT-FORCES.com but please excuse me if things appear to be a little slow.