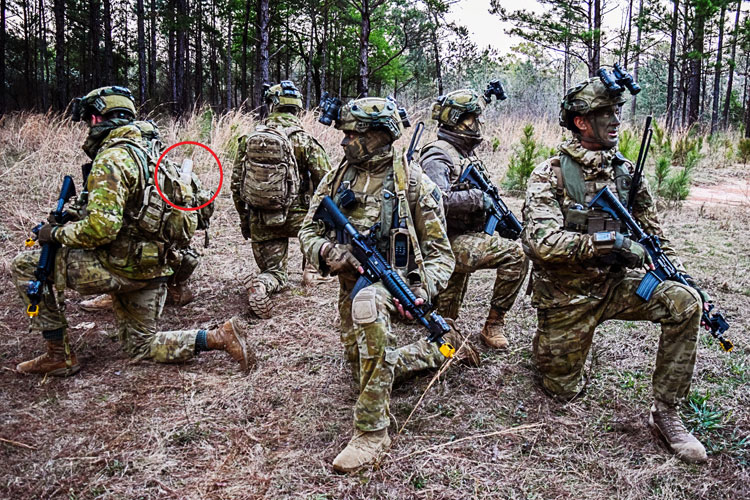 Spectra SlingShot (ringed) in use [image via Spectra Group]

Her Majesty’s Lord-Lieutenant of Herefordshire, The Dowager Countess Darnley, has presented Spectra Group (UK) with the highly prestigious Queen’s Award for Enterprise.

The Queen’s Award is highly contested and is a noteworthy recognition of the outstanding commercial success that Spectra has achieved with their revolutionary device, SlingShot. Along with the commemorative trophy, Spectra were presented with the official Grant of Appointment, given permission to use the Queen’s Award emblem and to fly The Queen’s Award flag at their main office.

SlingShot is a lightweight device that delivers game-changing capabilities to existing military and civilian radio networks. When connected to military or commercial UHF/VHF radios, Slingshot extends their range from under 50 miles to potentially 1000s of miles by utilising the commercial satellite network. The system works by simply converting standard radio signals to the frequency used by commercial satellites and is the only product of its type to enable beyond line-of-sight voice and data communications whilst the user is on the move. It also enables interoperability between agencies using different radio systems, without degradation by environmental factors such as weather, terrain and vegetation, delivering increased safety and security with improved flexibility and effectiveness.

Spectra’s innovation stemmed from a realisation in 2012 that there was a previously unutilised capability of the Inmarsat geostationary satellite network that would have huge potential in both military and commercial sectors. Within a year of working closely with Inmarsat, a working concept was developed and approved for use by the British military; versatile enough to be used in aircraft, vehicles, maritime platforms and by individuals on the ground. Spectra has since gone on to successfully market SlingShot internationally for military and non-military use, such as emergency services and disaster-relief, with a capability that has proved to be of critical importance and has undoubtedly contributed to the saving of lives.

Simon Davies, CEO of Spectra Group said: “I am extremely proud of what the staff at Spectra have achieved. This award is the greatest validation of our work; it’s a huge recognition and a ‘thank you’ to my team who have worked tirelessly to develop and produce our remarkable SlingShot technology”. He added, “Working on the design and building a business that supplies a product with the ability to revolutionise communications globally, not only for soldiers but also emergency services and disaster-relief agencies, is immensely satisfying. As a former soldier in the Royal Corps of Signals and knowing that lives are being saved is incredibly motivating for me and my team.”

Communications, Featured, Queens Award for Enterprise, SlingShot, SPECTRA Group
You may also like