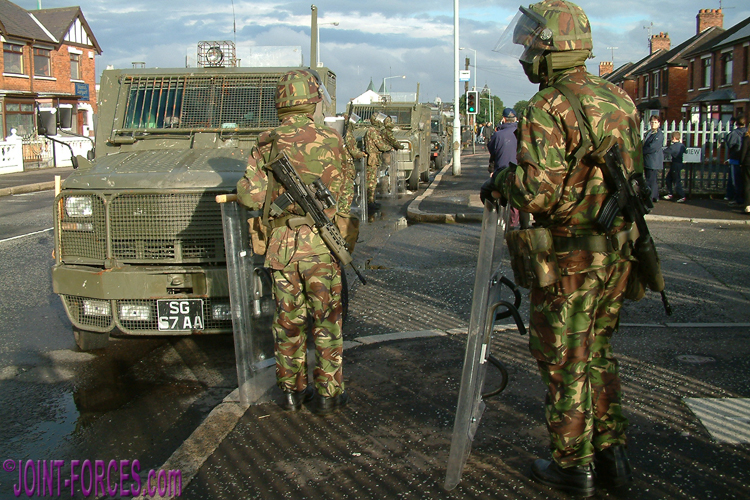 A commemorative event to mark the 50th anniversary of the start of Operation BANNER will be held at the National Memorial Arboretum on 14 August.

UK MoD News Release, 19 July 2019: Op BANNER was the longest continuous deployment of troops in UK Armed Forces history. Those eligible to attend the event can register before 30 July.

Op BANNER lasted almost 38 years between 14 August 1969 and 31 July 2007 – more than 300,000 members of the UK Armed Forces were deployed in this time. Some 1,441 serving personnel died on deployment or in related paramilitary acts.

The MoD is working with The Royal British Legion to honour the service and sacrifice of those on Op BANNER with an event at the Armed Forces Memorial, which individually commemorates those who fell. From 2pm, there will be a secular service, a fly-past of a Royal Air Force C-130 Hercules aircraft and music from The Band of the Royal Logistics Corps. The Defence Secretary Penny Mordaunt and senior representatives of the Armed Forces will attend.

Defence Secretary Penny Mordaunt said: “So many of our serving and veteran community deployed on Op BANNER, with all three services involved in supporting the police and civilian authorities. Fifty years on, it is right we recognise their contribution and sacrifice while reflecting on this significant part of our history.”

The Government has awarded The Royal British Legion £1.5 million in funding to deliver national commemorative events, specifically to include this 50th anniversary.

Those wishing to attend should register their interest with the charity.

The Royal British Legion’s Assistant Director of Commemorative Events, Bob Gamble, said: “Operation BANNER represents a significant period in the recent history of the British Armed Forces, and this event will honour both their service and sacrifice during that time.

“We are encouraging anyone who served with either the British Armed Forces or Civilian Services in Northern Ireland to register their interest in attending the event through the Legion’s website.”

The MoD provides a Grant-in-Aid of around £320,000 a year to the arboretum specifically to maintain the Armed Forces Memorial. In 2015, the memorial also benefited from £3m in Government funding to help pay for improvements and essential maintenance. Also at the arboretum, the Ulster Ash Grove of memorial trees honours all those who fell in Ulster. Dedicated in 2003, this memorial was funded by the Government and commemorates not only the UK Armed Forces who fell but also those of the RUC and the NI Prison Service. The Government held a service at St Paul’s Cathedral in September 2008 to mark the end of Op BANNER and honour those who served.