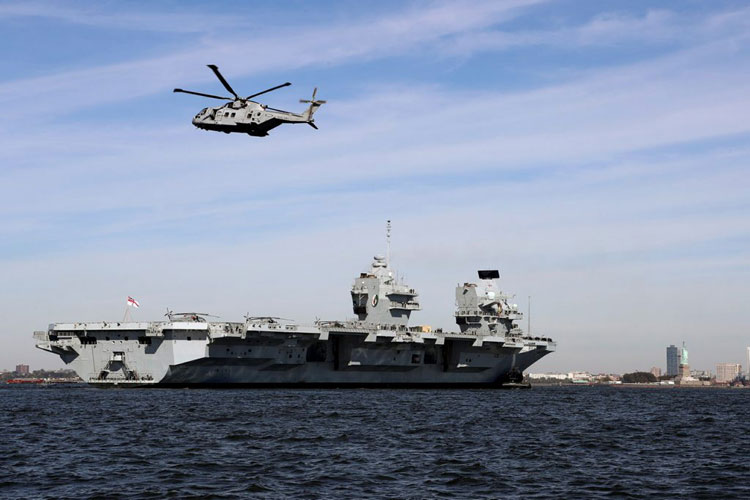 Babcock’s Rosyth dockyard has been awarded a contract to carry out the first planned dry-dock maintenance of Britain’s largest warship, HMS Queen Elizabeth.

UK MoD News Release, 09 January 18: A Scottish dockyard has been awarded a contract to carry out the first planned dry-dock maintenance of Britain’s largest warship, HMS Queen Elizabeth, Defence Minister Stuart Andrew has announced. The £5 million contract, won by defence company Babcock, will allow the 65,000-tonne carrier to undergo a routine, planned hull survey and maintenance of her underwater systems over a six-week period at the company’s Rosyth site. The work will sustain 100 jobs at its peak and be carried out in the summer.

Defence Minister Stuart Andrew said:“After a phenomenal year of trials off the East Coast of the US, this dry-docking contract is an important step for HMS Queen Elizabeth as she gears up for operations.
“The largest ship in our Royal Navy’s history, which was assembled in Rosyth, will now return for this multi-million-pound routine maintenance work as she gets set to represent Britain across the world for decades to come.”

The dry-docking period will mark the cutting-edge carrier’s return to the shipyard where she was built. Her sister ship, HMS Prince of Wales, is currently undergoing the final stages of construction at the Rosyth yard and was powered up for the first time in November. She is due to be handed over to the Royal Navy later this year.

Russell Brown, Director Ships Support at Defence Equipment and Support (DE&S), said: “The teams at Defence Equipment and Support are committed to bringing the national flagships into operational service and this dry docking is a crucial step on that journey. This significant national enterprise is built upon the excellent relationships across defence and the unparalleled skills within UK industry.”

HMS Queen Elizabeth and HMS Prince of Wales are the largest ships ever built for the Royal Navy. HMS Queen Elizabeth will resume aviation trials later this year with British-owned F-35s. She is expected to enter operational service in 2020, prior to her first deployment in 2021.