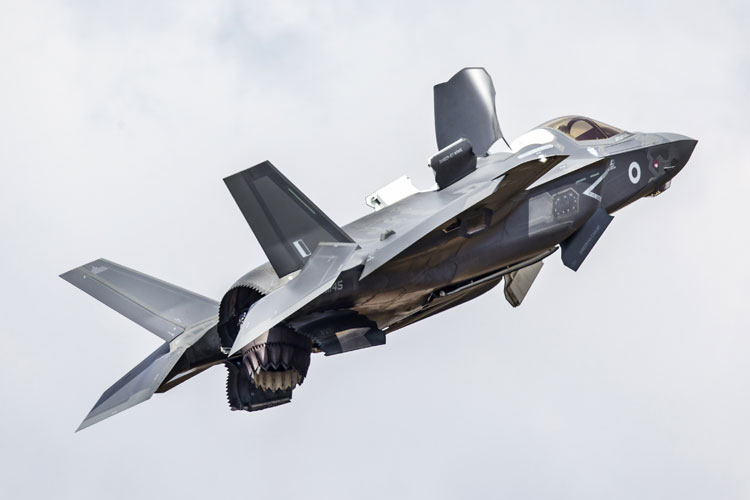 The UK is set to double its number of world-beating F-35 stealth jets after ordering 17 more aircraft, Defence Secretary Gavin Williamson has announced.

UK MoD News Release, 15 October 2018: The 17 new F-35B aircraft will be delivered between 2020 and 2022 and will complement the 16 British aircraft currently based at RAF Marham and in the US, as well as two additional aircraft which are already on order.

Overall, the UK has committed to procure 138 aircraft over the life of the programme. Defence Secretary Gavin Williamson said: “I am delighted to confirm that we are doubling the size of our F-35 force into a formidable fleet of 35 stealth fighters. This is another massive order in the biggest defence programme in history. Our military and industry are playing a leading role in the F-35 programme. We are now building this game-changing capability that will soon be ready for frontline action. This programme is set to bring an immense boost of £35 billion into the British economy, and it will be welcome news to our firms that many more jets are now set for production.”

The 17 jets being ordered are part of a $6 billion contract for 255 aircraft being built for the global F-35 enterprise. The announcement is also good news for the UK economy, as British companies are building approximately 15% by value of all 3,000-plus F-35s planned for production. It is projected that around £35 billion will be contributed to the UK economy through the F-35 programme, with around 25,000 British jobs also being supported.

CEO of Defence Equipment and Support, Sir Simon Bollom said: “As the largest operator of F-35s outside of the US, the acquisition of 17 more Lightning aircraft underscores our commitment to the programme. This new contract demonstrates how our Armed Forces are equipped by DE&S with the latest equipment and support.”

News of this latest order comes as F-35B aircraft are currently embarked on HMS Queen Elizabeth for flying trials in the US, which continue to progress well. The fighter jets will be jointly manned by the Royal Air Force and the Royal Navy and can operate from land and sea, forming a vital part of Carrier Strike when operating from the Queen Elizabeth Class aircraft carriers.