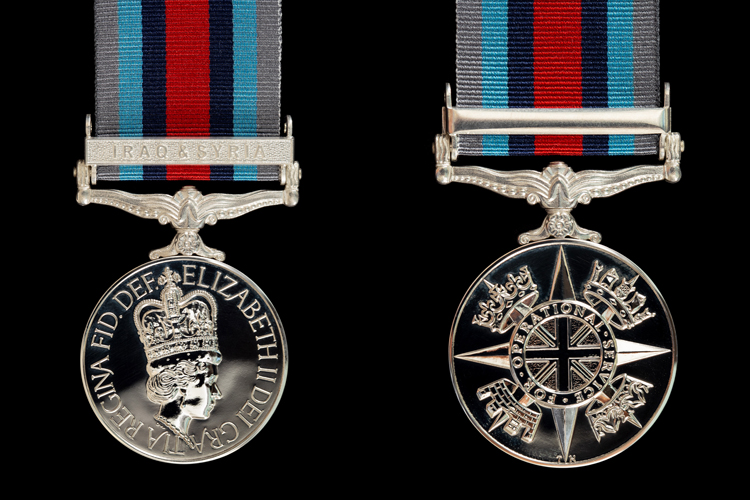 British personnel from all three services who successfully tackled Da’esh have been awarded a new Operational Service Medal at the Ministry of Defence in London today.

Press Release: Sailors, soldiers and airmen received the Operation SHADER medal from Defence Secretary Gavin Williamson. It is the first operational service medal to be created since 2003 and has its own distinct ribbon and clasp.

The Defence Secretary also confirmed today that Her Majesty the Queen has approved the extension of the eligibility criteria for the medal to new groups of personnel. It means that the medal will also recognise those who have made a significant contribution from outside the conventional area of operations in Iraq and Syria, including civilians.

Defence Secretary Gavin Williamson said: “The campaign against Da’esh is one that our Armed Forces can be extremely proud of. Eliminating the threat from terrorism is critical to our security at home and abroad. Our troops have made huge contributions to the fight against Da’esh, helping end its tyranny in large parts of Iraq and Syria. Only by defeating this evil and barbaric group for good will we reduce the deadly threat they pose to us. I am pleased that today those who have bravely fought against such untold evil will get the recognition they deserve. Reflecting the changing nature of warfare I am pleased to announce that the medal will now recognise those making a vital contribution to Op SHADER from outside the conventional area of Operations, for example those Reaper pilots taking life and death decisions from back here in the UK.”

Since 2014 the UK Armed Forces have taken a leading role in the counter-Da’esh Global Coalition. The RAF has so far conducted over 1,700 strikes against Da’esh terrorist targets and units from across the Armed Forces have helped train over 77,000 Iraqi Security Forces in infantry skills, counter-IED, engineering, and medical expertise. As a result, their capacity to defeat Da’esh has increased considerably, contributing to the success of this campaign.

Despite recent success over the last year the operation continues and fast jets continue to fly out of RAF Akrotiri in Cyprus and remotely-piloted Reaper aircraft continue to provide support to the Syrian Democratic Forces on the ground who are clearing the last remaining pockets of Da’esh terrorists in Eastern Syria. Currently around 1,400 personnel still play an important role in the Global Coalition’s counter-Da’esh operations in the wider region.

The Operational Service Medal for Iraq and Syria is silver and circular in shape.
Share