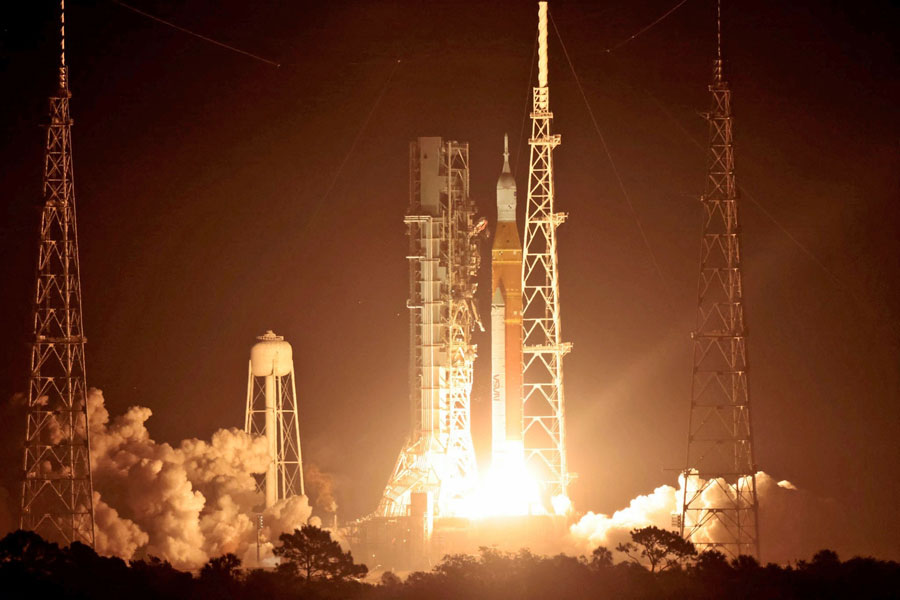 The Lockheed Martin-built Orion spacecraft was today launched to the Moon on the historic Artemis I mission from the Kennedy Space Center.

Press Release, Kennedy Space Center, 16 November 2022: With the backdrop of a Florida starlit sky, NASA’s Artemis I mission, with the Lockheed Martin-built Orion spacecraft on top, majestically launched to the Moon and propelled the world into a new era of human deep space exploration. This test flight is the first in a series of missions under NASA’s Artemis program, which will result in the first woman and first person of colour landing on the Moon.

Orion lifted off aboard NASA’s Space Launch System (SLS) rocket at 1:47 a.m. ET today and two hours later the spacecraft separated from the rocket’s upper stage travelling at 22,600 mph. This put it on a trajectory to break away from the gravity of the Earth and make its way to the Moon.

“We’re witnessing history as Artemis I brings us one significant step closer to making NASA’s vision for human deep space exploration a reality,” said Robert Lightfoot, executive vice president of Lockheed Martin Space. “Through a nationwide industry team that has also leveraged an international industrial base, this launch and mission unite the skills of a dedicated workforce and innovative technologies to make a global impact.”

With this successful launch, the planned 25.5-day mission has begun. It will initially take several days to reach the Moon and fly above its surface. Using the Moon’s gravitational force, it will propel into a unique distant retrograde orbit that will take it about 40,000 miles beyond the backside of the Moon. Orion will orbit the Moon and collect data to allow mission controllers to assess the performance of the spacecraft and its payloads.

Preparing for Splashdown: Orion will fly close to the Moon and use a precisely timed engine firing in conjunction with the Moon’s gravity to accelerate back toward Earth – travelling at 25,000 mph as it enters the planet’s atmosphere. The spacecraft will splash down off the coast of San Diego, California.

“Most people today have not lived in a time when a human-rated deep space spacecraft has gone to the Moon or beyond,” said Lisa Callahan, vice president and general manager of Commercial Civil Space at Lockheed Martin Space. “With today’s launch, that statistic has changed and we’re now all members of the Artemis Generation. Personally, I can’t wait to see the first woman walk on the Moon and the spacecraft that will take her there is already in development.”

Launching a Series of Industry-First Demos and Advancements: With a focus on leaning into commercial partnerships and building innovations that will prepare the industry for a future crewed mission, Lockheed Martin has several notables on board for the historic ride: