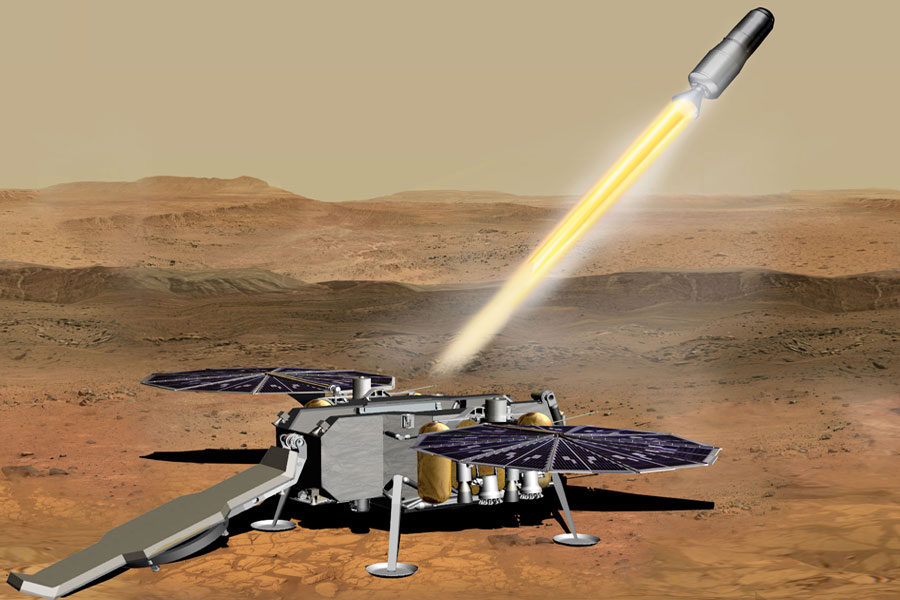 Lockheed Martin will lead development of the Mars Ascent Vehicle (pictured), cruise stage for the Mars Sample Retrieval Lander, and the Earth Entry System that will help return the first ever Martian rock samples to Earth [© NASA]

Lockheed Martin has been selected for critical elements of NASA’s mission to bring back the first ever samples from Mars.

The first contract is for the cruise stage that will power and steer the Mars-bound journey of the lander that retrieves Martian rock and soil samples from the Perseverance Rover. For this $35 million award from NASA’s Jet Propulsion Laboratory in Southern California (JPL), Lockheed Martin will produce the cruise stage and its comprehensive elements, including the solar arrays, structure, propulsion and thermal properties.

The second is for the Mars Ascent Vehicle (MAV), the lightweight rocket that will launch sediment and atmospheric samples from the surface of the Red Planet, as they head back to Earth for study. Under the $194 million contract from NASA’s Marshall Space Flight Center, Lockheed Martin will design, build, test and deliver the rocket – which will be the first ever to lift off from the surface of another planet.

The third contract, through JPL, is for the Earth Entry System. Leveraging government research, the system is designed to bring those first ever samples safely back to Earth in a protective case. This initial $2.6 million award includes preliminary design of the structure that shields the samples as they make their bold return journey through Earth’s atmosphere.

Cruising to the Red Planet: In the mission architecture being planned by NASA and the European Space Agency, the Lockheed Martin-built cruise stage will propel a lander to the Red Planet, where that lander will touch down and collect Martian soil samples cached by the Perseverance Rover.

To avoid seasonal dust storms, this journey to Mars will take about 28 months. The cruise stage is critical for power, communication and steering the spacecraft throughout its journey. The cruise stage is comprised of a complex network of wiring, propulsion tanks and powered elements that are integrated with the aeroshell, which shield the spacecraft as it enters Mars’ atmosphere. The directional control the cruise stage provides is also vital when it comes to ensuring the future lander enters Mars’ atmosphere at the correct point.

Lift-off From the Martian Surface: This lander that touches down on the Red Planet will bring the ascent vehicle along with it to the surface. Once the lander retrieves samples from Perseverance, the MAV will then launch those contained samples into Martian orbit for rendezvous with a European Space Agency orbiter that has the Lockheed Martin-built sample return capsule inside.

The Martian rock samples will then be stowed in that container, which is jettisoned once the orbiter returns to the proximity of Earth. Earth’s gravitational pull takes the capsule back through the atmosphere, where it will experience thousands of degrees of heat and intense forces before its soft desert landing.

Returning Safely to Earth: Lockheed Martin has designed and built return capsules and spacecraft for all three of NASA’s robotic sample return missions – Genesis, Stardust and OSIRIS-Rex. This extensive experience has allowed the company’s engineers to understand and perfect the complexities required to safely deliver a sample home.

The capsule being designed for Mars Sample Return is made of a lightweight-yet-strong composite structure and a special thermal protective material provided by NASA’s Ames Research Center in California’s Silicon Valley that envelop the precious samples. The structure of this Earth Entry System keeps the sample safe during its months-long cruise in deep space, slows its speed upon arrival and protects it from intense heat as it screams through Earth’s atmosphere at thousands of miles per hour.

Lockheed Martin has been involved in all 22 NASA missions to Mars and has partnered with the agency to explore every planet in our solar system. The team is excited to continue that legacy by supporting the first ever sample return mission from another planet.

The decision to implement Mars Sample Return will not be finalised until NASA’s completion of the National Environmental Policy Act (NEPA) process.