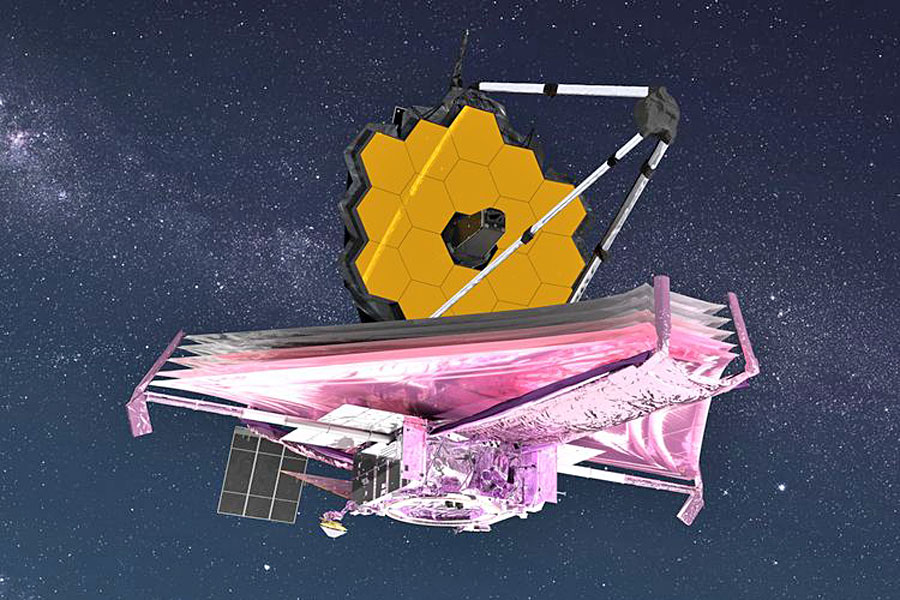 The James Webb Space Telescope has begun its million-mile journey from the ESA Spaceport in Kourou, French Guiana aboard an Ariane 5 rocket.

Approximately 30 minutes after launch, Webb detached from the Ariane 5 rocket, marking the beginning of a million-mile journey and the start of a two-week complex deployment process to unfold the spacecraft in preparation for arrival at Lagrange Point 2 (L2).

“Since the dawn of the space age, NASA, international partner agencies and industry partners, together with Northrop Grumman, have been defining what is possible in space science and exploration,” said Kathy Warden, chairman, chief executive officer and president, Northrop Grumman. “Over the next few weeks, the James Webb Space Telescope will transform into an awe-inspiring scientific tool that will usher in a new era in human discovery.”

During the journey to L2, Webb will convert from its stowed position in which it left Earth to the configuration that will allow it to see light coming from the earliest stars to shine in the Universe. Part of this journey is to unfold the tennis court-sized, five-layer sunshield around the sensitive mirrors that allow Webb to take pictures and collect data that will come back to Earth for scientific review. Once operational, Webb will explore farther than ever before into the cosmos, looking back 13.5 billion years.

To deliver this kind of scientific data, Webb incorporates innovative design, advanced technology, and ground breaking engineering. Ten technological inventions were created to build the revolutionary telescope so that it can detect light from the first stars and galaxies. Some of these innovations include optics, detectors and thermal control systems.

Lockheed Martin Press Release, Kourou, 25 December 2021: With the lift-off of NASA’s James Webb Space Telescope from French Guiana today, humankind is one step closer to seeing the universe in a whole new light, with help from a camera built by Lockheed Martin. The instrument will be key in giving the telescope its first glimpse of celestial light.

The Near Infrared Camera (NIRCam) is Webb’s primary imager and one of the most sensitive infrared cameras ever built. As the telescope sets itself up in space, NIRCam will help align Webb’s intricate array of mirrors. It will then take science images throughout the entire mission.

“NIRCam’s journey is over two decades in the making, and seeing it lift off into space on Webb was the culmination of many years of hard work with Marcia Rieke and our University of Arizona partners,” said Alison Nordt, Lockheed Martin’s space science and instrumentation director, who led development of NIRCam. “Webb will rewrite the science books of how we understand our universe, and to have Lockheed Martin-built technology help advance the future of space imaging is an honour.”

The Lockheed Martin and University of Arizona team designed, built and tested NIRCam out of the company’s Advanced Technology Center in Palo Alto, California.

How to Look at the Universe’s Oldest Light: Webb is designed to peer at the universe’s oldest light, which scientists believe occurred around 13.5 billion years ago. As the universe expands, those light waves that were once visible have now shifted into the infrared spectrum. This light is incredibly far away and extremely dim, which is why Webb requires large mirrors – along with NIRCam’s ultra-precise optics – to see it.

Before that can happen, NIRCam’s first job is to sense incoming infrared light and take images that will help the telescope’s systems properly align its 18 primary mirror segments. This is critical to ensuring Webb provides crystal clear images once it enters science mode.

The Technology Behind NIRCam: For Webb’s mirror alignment in early 2022, NIRCam senses what’s called a ‘wavefront’, or an ideally perfect sphere of light particles emitted from any luminescent object. When those particles encounter another object – in this case, the telescope’s optics – they become distorted. NIRCam measures those distortions with nanometric accuracy, and that data is then used to advise how Webb’s mirrors must adjust. This iterative process is done until the telescope’s mirrors are properly aligned.

With Webb travelling more than 1 million miles from Earth into space, NIRCam must function with extreme precision and stability in temperatures as cold as -400°F. In fact, the telescope needs frigid temperatures to ensure infrared radiating off the observatory doesn’t overwhelm the images. To enable operations in such extreme conditions, Lockheed Martin developed a new technique for bonding NIRCam’s optical lenses to their mounts. The innovative method ensures the cold and launch vibrations don’t cause shifts in alignment of NIRCam’s lenses.

After more than a decade of meticulous engineering and rigorous testing, the team delivered one of the most capable infrared instruments ever created, and NIRCam was fully integrated onto Webb in 2014. Now, the telescope gets situated for a decade of ground-breaking observations to shape how we see space for years to come.

More About the Mission: The Webb Space Telescope is the world’s newest premier space science observatory. It will solve mysteries in our solar system, look beyond to distant worlds around other stars, and probe the mysterious structures and origins of our universe and our place in it. Webb is an international program led by NASA with its partners – the European Space Agency and the Canadian Space Agency – and industry participation from many companies, including Lockheed Martin.