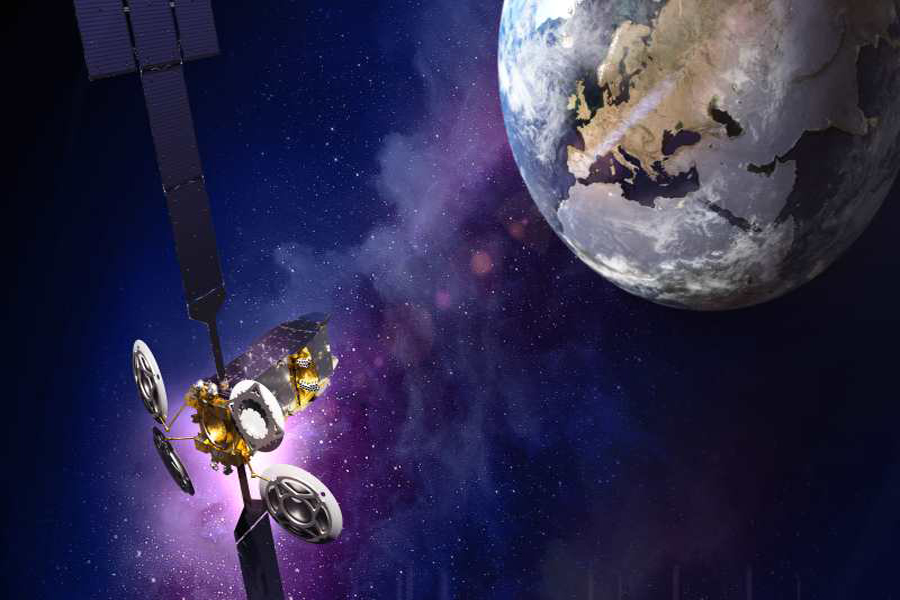 The EUTELSAT KONNECT VHTS payload has been delivered from the Thales Alenia Space Toulouse plant to their facility in Cannes.

News Release, 06 August 2021: The construction of EUTELSAT KONNECT VHTS geostationary communications satellite is moving forward. The latest major milestone was the delivery of the payload from Thales Alenia Space’s Toulouse plant to our facility in Cannes.

EUTELSAT KONNECT VHTS (very high throughput satellite) will be the largest ever built by Thales Alenia Space. It will stretch 8.8 metres high (about 29 feet), as tall as a three-story building, and weigh 6.5 metric tonnes. In fact, it will be the most powerful communications satellite ever built in Europe. Delivering an object of this size demanded considerable logistics ingenuity, and that’s the story we’ll be telling here.

Exceptional resources for exceptional performance: Friday, July 30, 2021. We’re in the clean rooms at Thales Alenia Space’s plant in Toulouse, southwest France. The payload for Eutelsat’s latest satellite, as huge as it is majestic, is ready. People’s emotions are at a fever pitch as the payload is loaded into its container.

The following day, Saturday, the staff in Toulouse help seal the container. Our invaluable cargo took to the road on Monday, August 2, but it was a real ‘wide load’, so large that it had to be transported at night. On the expressway, it stayed in the middle lane and had to stop at each rest area. To protect its irreplaceable cargo, speed was limited to 50 km/h (31 mph) – only natural when you realise that the vehicle was 32.5 metres long, 5.5 metres wide and weighed some 72 metric tonnes (that’s 107 x 18 feet and over 158,000 lb!). On the other roads, traffic was blocked as it advanced, which meant endless starts and stops. Each time it had to go through a tollbooth, it took 15 minutes. All in all, the journey from Toulouse to Cannes lasted four days, with the payload finally arriving the morning of Friday, August 6.

Prior to the actual trip, a full-scale mock-up was deployed to make sure the ‘wide load’ satellite convoy was compatible with the entire planned route, including highways, expressways and local roads. It’s also worth noting that the access roads to the Aix en Provence/la Barque and Fréjus/Capitou tollbooths had to be enlarged, and the access road to the Cannes la Bocca expressway also had to be revamped.

Bridging the digital divide in Europe: EUTELSAT KONNECT VHTS is a new-generation geostationary satellite built by Thales Alenia Space as prime contractor on behalf of Eutelsat. It will provide high-speed Internet access everywhere in Europe, especially in isolated regions with poor coverage, delivering service on a par with fibre-optic networks in terms of performance and cost. With instantaneous throughput of 500 Gbps across Europe, EUTELSAT KONNECT VHTS will make a significant contribution to bridging the digital divide on the old continent.

EUTELSAT KONNECT VHTS is built on a Spacebus NEO platform with all-electric propulsion from Thales Alenia Space. It features a state-of-the-art payload using disruptive technologies developed with support from the French government, via the space agency CNES and the Investment in the Future Programme, and the European Space Agency (ESA). In particular, the payload includes a high-performance digital processor that combines agile capacity allocation, optimised spectrum use and support as well as gradual ground network coverage deployment. Our Cannes plant will now continue the production process with satellite AIT: assembly, integration and testing.

We’ll keep you abreast of the latest programme progress in the coming months. The satellite is scheduled for launch in 2022, when it will go a long way towards bridging the digital divide in Europe.