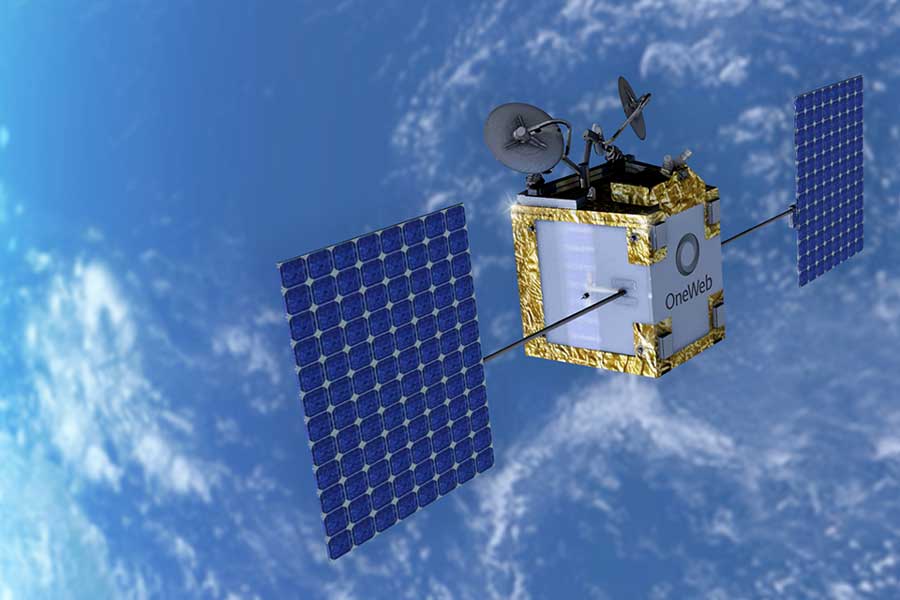 A group of UK space companies is developing a new beam-hopping satellite to allow satellites to switch which part of the world they cover.

UK Space Agency News Release, 24 May 2021: A group of UK space tech companies are developing a new beam-hopping satellite that will allow satellites to switch which part of the world they cover, managing real-time surges in commercial demand or responding to emergencies such as natural disasters, thanks to government funding.

Led by global satellite communications network OneWeb, the industrial partners have received over £32 million from the UK Space Agency, via the European Space Agency’s Sunrise Programme, for a demonstration satellite due for launch in 2022. The satellite, nicknamed ‘Joey-Sat’ for its beam-hopping abilities, will be able to remotely direct beams to boost coverage in certain locations, such as areas of high usage where the network is struggling to cope with demand.

Science Minister Amanda Solloway said: “From helping during a disaster to providing broadband on planes, this amazing technology will show how next-generation 5G connectivity can benefit all of us on Earth.

“It is fantastic to see some of our finest space tech companies joining forces on this exciting project which will put the UK at the forefront of satellite communications technology.”

The new funding, which builds on the UK Space Agency’s previous investments in the Sunrise Programme, will see OneWeb team up with other UK companies, SatixFy, Celestia UK and Astroscale UK, to demonstrate the technology for its second-generation constellation of satellites.

Massimiliano Ladovaz, Chief Technical Officer at OneWeb, said: “Innovation and collaboration are at the core of OneWeb. Working together with our partners, OneWeb will accelerate the development and expansion of our cutting-edge technologies and manufacturing capabilities for the benefit of communities, enterprise and governments around the world.

“This is an exciting opportunity to work with talented potential supply chain partners and we are delighted with the support from ESA and the UK Space Agency to bring continued innovation across the whole of OneWeb’s connectivity ecosystem.”

Charlie Bloomfield, CEO of SatixFy Space Systems, said: “We are really excited to be demonstrating new game-changing satellite payload capabilities in space next year, in collaboration with OneWeb.

“The £25m funding from the UK Space Agency via ESA, matched with SatixFy’s own internal investment, will not only demo best-in-class future payload capability, but will also result in the lowest-cost and highest performance electronically-steered multibeam user-terminals on the market. UKSA and ESA support has been fundamental in unlocking these new technologies and we look forward to a fruitful and ongoing partnership with them.”

Celestia UK, based in Edinburgh, has been given £4.4 million to develop and trial smart ground-station technology featuring multibeam electronically steered antenna to reduce the footprint and costs of each ground station and increase the efficiency of the whole ground network.

José Alonso, President of Celestia UK, said: “The business opportunity that OneWeb and UK Space Agency have presented to Celestia UK in the context of the Sunrise Programme is outstanding. The pioneering project we are developing looks set to become a game changer in the satcom ground segment market.

“Gateways and user terminals are key elements in the OneWeb constellation, and Celestia UK’s products will be state-of-the-art and fit for commercial purpose. We are very proud to be part of Sunrise.”

The Sunrise Programme has maintained a clear focus on encouraging the development of Responsible Space using debris removal technologies, and this element is being developed by Astroscale UK, based at Harwell Campus, Oxfordshire. Astroscale UK has received close to £2.5 million to develop novel technologies to safely de-orbit unresponsive satellites. Astroscale’s current mission, ELSA-d, is preparing the way for a multi-debris removal service, ELSA-M. This funding will support further technological innovations and UK in-orbit servicing skills development and demonstrate the government’s commitment towards developing a sustainable and vibrant New Space economy.

“Following our ELSA-d mission demonstrations later this year, the Sunrise programme will help to mature our debris removal technologies ready for commercial service launch by 2024.”

OneWeb currently has 182 satellites with another launch of 36 satellites scheduled for 27th May. Designed to provide organisations and governments with global and resilient connectivity services, OneWeb’s network will feature 648 Low Earth Orbit (LEO) satellites, global gateways and air, maritime and land user terminals. In late 2021, OneWeb will begin providing commercial services across the Arctic regions and expanding to global coverage in 2022.

Elodie Viau, Director of Telecommunications and Integrated Applications at ESA, said: “Joey-Sat will be used to demonstrate how next-generation 5G connectivity can benefit life on Earth. ESA is proud to support the space industry in Europe to bring such innovation to the competitive global telecommunications market. We congratulate all the partners involved.”

With the support of these British companies, OneWeb is already starting to create the roadmap for its future generation constellation so as to be launch-ready for its Gen2 constellation in 2025. OneWeb recently launched its first Innovation Challenge to seek further new technology to give its future constellations the capabilities to keep it at the forefront of satellite communications technology and meeting end-user demands.

The findings from the latest ‘Size and Health of the UK Space Industry’ report, commissioned by the UK Space Agency and published this week, show income from the UK space sector has risen from £14.8 billion to £16.4 billion, representing growth of 5.7% in real terms, while employment is up by 3,200 from 41,900 to 45,100.