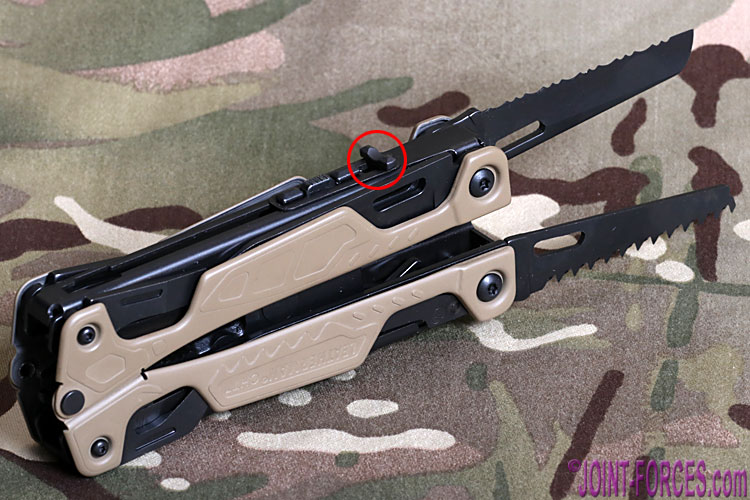 It never ceases to amaze me how the Leatherman Tool Group can keep creating new variations on an already successful belt tool concept, writes Bob Morrison.

I confess to having been a staunch fan of Leatherman tools for over two decades, though I also own competitor tools from Gerber and SOG that I use from time to time, so this review might appear slightly biased – though I hope not. As with SLR cameras, where there is a Canon versus Nikon thing, once you get used to a specific make of belt tool the other brands will need to do something pretty radical to draw you away from your favourite and I suspect if I were not a Leatherman aficionado the OHT might make me reconsider my loyalty.

The OHT (One-Handed Tool) is by no means new, having been around for a couple of years now, but now that it is available in Coyote Tan as well as Tactical Black and Stainless Steel it is worth another serious look. As can be seen from the lead image, the OHT is MTP-compatible and although its blades are still black its tan coloured outer frame stops it standing out quite as much as solid black; note also the light shade tends to alter in colour dependent on its surroundings.

However it is the one-handed operation of both the spring-loaded pliers and all tool blades that is the real talking point – in the past you could get a Leatherman with one-handed blades or one-handed pliers, but not both. Additionally, if you wish to keep the pliers stowed all you need do it twist a simple lock (circled in red on the lead image) but if you unlock this and pinch in the two press locks either side you will find the pliers jaws extend under gravity with just a flick of the wrist. Note, this handy method of one-handed pliers deployment does not actually feature on the company video below, but once you have sussed it you will do it without thinking.

On left the nylon sheath, seen from rear, with my 20yo Leatherman SuperTool to the right for size comparison [© BM]

In total the OHT features no less than 16 blades or tools, all of which stow away into the handles without leaving any sharp edges. In case you have not sussed them all out from the photos they include:-

The first four on the above list are spring-action, the eight knife/tool blades inside the handles can be thumb-operated and have simple thumb locks, and there is an impression of each blade embossed on the corresponding handle to let the user quickly identify which one to select. A black nylon sheath with MOLLE/PALS press stud strap on the rear face, which has a variable method of attachment to allow for belt carry too, comes with the OHT but I can vouch that it will also fit snugly in a Mk. IV Osprey 9mm ammunition pouch if you prefer to go down the MTP route.

To buy the Leatherman OHT online go to this Leatherman.co.uk page. If you prefer to buy over the counter, all retail outlets listed on our Garrison Town Shops page sell Leatherman belt tools, but check first for stock availability if planning on making a special trip.