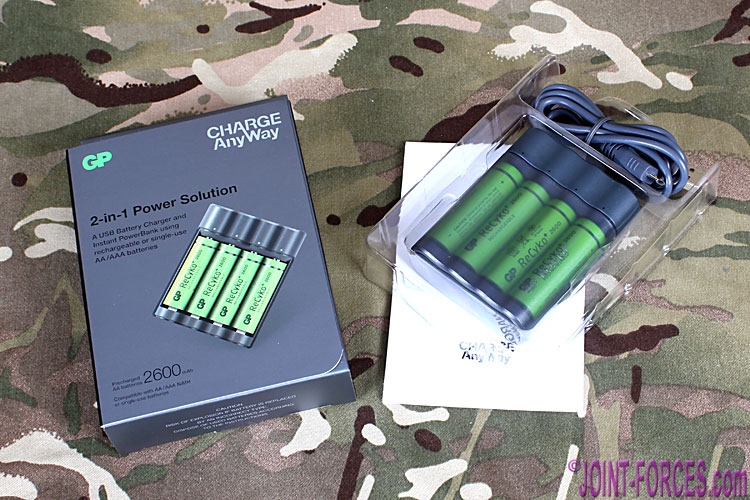 The new Charge AnyWay from GP Batteries is much more than a battery charger as it can also be used as a power bank for your mobile devices, writes Bob Morrison.

Our man Mike Gormley introduced me to GP Batteries and their associated power devices back in the days when we were both scribbling and snapping for the late C&S Magazine and I have been using various items from their expanding range ever since. This latest Charge AnyWay device from the Singapore-based company, part of part of the massive Gold Peak Industries Group, ingeniously uses new technology to turn a USB-powered battery charger into power bank thereby cutting down on the number of devices one needs to carry.

If you are constantly on the move, like Mike and myself are, you will most likely carry a plethora of charging devices and batteries with you, so this handy multiple use charger will be most welcome as it is both compact and reduces the amount of accessories one has to carry. Not only can it be run off its (included) USB cable from a computer or laptop to recharge the two most popular battery sizes, but pretty much any phone or tablet charger with a micro USB lead can also be used to power the dual use AA / AAA charger from the mains. Tip: using a universal phone charger with changeable end pins can eliminate the need to carry multiple small device chargers and a selection different USB leads.

Once your rechargeable spare batteries are charged up (no need to carry loads of spare alkaline batteries for the duration of your trip any more) if you leave them in the Charge AnyWay you now have a handy power bank to top up your phone or SatNav etc. when its internal battery level invariably drops off. Not only that, but the Charge AnyWay will also accept (but not recharge, of course) alkaline batteries to give the user an emergency power bank. According to the manufacturer, if using four fully charged GP ReCyko+ NiMH 2600 mAh batteries in power bank mode it should be possible to achieve 100% charge on an iPhone7 or 78% charge on a Galaxy S8.

Added bonus: If the frequent traveller fits charged ReCyko+ batteries in the Charge AnyWay the resultant power bank will comply with airline check-in and carry-on regulations as the pack is lithium-free.

Additionally, by using GP rechargeable batteries one is helping do their bit for the planet by slightly reducing that mountain of used alkaline batteries.