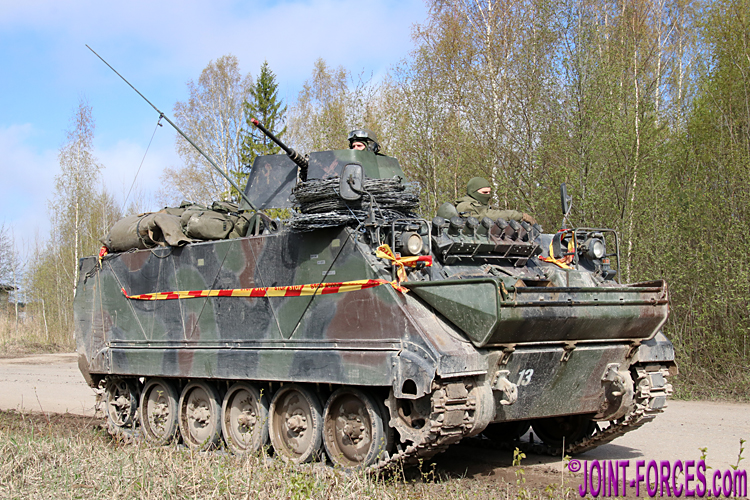 Other than the main course (or entrée in US terminology) retort pouch contents both of these single meal rations, Menu (Variantas) Nr.8 and Nr.10, are essentially little different from previously reviewed Menu Nr.1 from a couple of years ago; and that is possibly their culinary Achilles heel.

Both rations, each packed in a tough dark green plastic outer pouch, weighed 0.67kg and provided either 1459 or 1495 kcal when all edible items were consumed. As before, each pack contained: one silver retort pouch main meal, protected by a white cardboard carton; one Flameless Ration Heater, packed inside the retort pouch carton; one 90g pack of four Polish high energy hard rusk biscuits, flavoured with cumin seeds; one 100g pack of nuts, in both cases hazelnuts rather than almonds; a snacks pack and and ancillaries pack, both in small resealable plastic bags; plus a folding metal cooker tray in a white card outer.

The snacks pack contained: two 18g bars of Lithuanian chocolate, in a faux camo outer; one 30g tub of honey; one 30g drinks powder sachet, either Orange or Lemon; one 12g sachet of sugar; one 2g sachet of coffee powder; and a contents list in Lithuanian, French and English (the latter two being the official NATO languages). The accessories pack contained: a strip of three 10g fuel tablets; one box of 40 blue-tipped safety matches; one moist towelette; one small zip tie, intended for use as a closure when the outer pouch is used to hold discarded packaging; and one reasonably large bowl white plastic spoon.

Although the Flameless Ration Heater or FRH will adequately warm up the mean main pouch in temperate climates, in the depths of a Baltic winter it might not be adequate to heat it sufficiently from near frozen so in such circumstances the solid fuel and cooker tray might be required. Additionally, the FRH cannot and must not be used to boil water, so the folding cooker and a fuel tablet are required for making tea (or in this case coffee). This small, and not particularly stable, cooker is open to the elements at both ends so is not particularly efficient and if it is very windy it will need to be used behind a non-combustible windbreak to ensure it properly heats the user’s mess tin.

As mentioned in Part 1, it is not often that Carl or myself have the chance to bring home more than one ration pack from a series so each recorded taste test has to be done in isolation. Although we sometimes eat more than one ration pack variant during the course of an exercise it is not very often that conditions in the field allow us to photograph and record all the contents in a standard format. In this case, having now tried three of the ten Lithuanian Dry Food Ration (Sausasis Maisto Davinys) Menus, I have realised that other than different main course pouches they are near identical and therefore could become very boring. It would have been nice to have had, say, different flavoured high energy bars instead of chocolate to bring more variety, and maybe dried fruit instead of nuts, and those hard rusk biscuits are pretty boring fare. However Lithuania is not as far down the combat ration pack road as some of the original NATO allies and also as its Regular Army is, by way of example, only about one tenth of the size of its British equivalent it does not have the same economies of scale.

The two main meals sampled here, Stewed Chicken with Rice Mash (Variantas Nr.8) and Beef Stew with Vegetables (Variantas Nr.10), may not look particularly appetising but remember one does not taste with one’s eyes. I found both, which I heated in boiling water rather than with the FRH, to be both surprisingly tasty and very filling. Each 240g pouch, of which 100g was meat, was marked as providing 410kcal. As it to be expected of near traditional Northern European cuisine, neither dish was spicy but I still found both to be very palatable.

The only problem I encountered with these two ration packs was the chocolate, but that is not the supplier’s fault as I picked them up at WAPR Beltring, from one of the military surplus traders, on the hottest day ever recorded in England. The advised storage temperature range for the pack is from 0C to 18C, but that particular day we experienced twice this temperature, so it is little surprise that the chocolate melted into a blob and solidified into a crumbly and discoloured mess when it cooled; this is a pity as I really like the Rūta brand. The rest of the contents tasted okay.

One final tip, for those consuming at home: The ‘panzer track’ hard biscuits are a bit of an acquired taste, and you need strong teeth to tackle them, but if nibbled with mature cheddar and accompanied by a full-bodied red wine they are a more than passable evening snack.