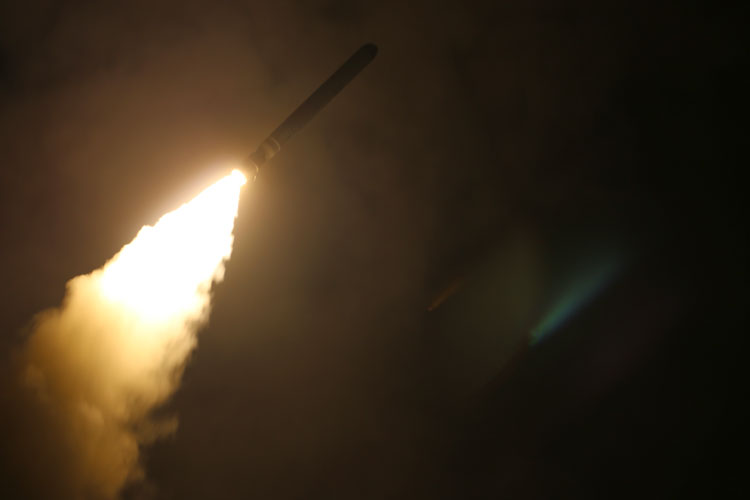 Relationships with Russia have deteriorated recently with not only the suspected Russian poisoning of a GRU defector and his daughter on UK soil using nerve agent but now a chemical weapon strike in the Syrian town of Douma (suspectedly using chlorine gas) which killed 75 people on April 7th.

The Douma strike was allegedly carried out by Syrian Forces which Russia is supporting (with weapons and military advisers) in opposition to the US and UK backed Free Syrian Army Forces (which the US and UK are supplying with weapon and Special Forces advisers) which seeks to overthrow the long term leader of Syria, President Assad. The Organisation for the Prohibition of Chemical Weapons (OPCW) has now been allowed entry to the incident site but is unlikely to find anything more insightful as the incident site has had time to be cleared up and any compelling evidence removed. Both sides have used chemical attacks on each other during the conflict.

The US, UK and France subsequently attacked a chemical weapons laboratory at Barzeh and a chemical weapon storage site at Him Shinshar in retaliation for the Douma attack using 105 cruise missiles fired from a mixed source of naval vessels and Storm Shadow missiles launched from aircraft (including Tornado). In this attack the Russian forces had again been forewarned, allowing them to move any of their personnel and assets out of harm’s way to prevent collateral damage to Russian forces which could lead to an escalation and an increasing potential for war.

The National Cyber Security Centre (part of GCHQ) has since warned that Russia could respond with a cyber attack on critical national infrastructure and business networks and the US has signalled that it is ready to strike back in a retaliatory attack. Is it possible to break this cycle of tit for tat attacks and prevent an escalation into a major armed confrontation and are we really at as much risk as we think?

Any cyber attack by Russia on UK national infrastructure could be very damaging and lead to retaliation by the UK and US so Russia is more likely to release politically embarrassing emails of politicians that undermine the trust of the public in the political system. It will also seek to promote inaction and division by having its Russian supporters within the government question the UK strikes on Syria and undermine the ability of the UK government to make rapid military decisions. It might well seek to use information provided by the interception of emails, influence and our government processes to remove the PM and replace her with a supporter loyal to Moscow who has been known to support terrorists in the past that attacked UK and who would also seek to degrade our military capabilities even further.

Since there was no military response from Russia to the strike in Syria it can now say to the world and its population that they did not respond in the interest of peace and that it was US and UK aggression against Syria. This will shape Russian perception at home and increase Putin’s popularity. The fact that Russia did not respond with its S400 air defence system has ensured that the system’s effectiveness was not assessed by the US and UK forces and, importantly for Russia, was not seen to fail; something which could affect its export sales (it needs the hard currency generated by sales of military weapons and equipment) added to this is its image in Russia where the modernisation of the Armed Forces and its increasing capabilities is popular with the public. Although there is some criticism of the Russian military engagement in Syria by the Russian public it does provide a useful testing ground for new equipment, tactics and as a way for Russian troops to test their ability against a near peer enemy such as the US and UK Special Forces.

Russia is unlikely to retaliate with military strikes on UK assets in Cyprus such as RAF Akrotiri (which is in range of the S400 air defence system) as this could escalate matters in the same way as Western strikes on Syria if they destroy UK assets or kill UK personnel. The UK will perceive that it has responded to Russia’s attack on the Russian defector by striking Syria’s chemical capability and therefore have saved face given that the UK cannot respond to Russia in a military fashion (we do not have the capability to do so) and ethically the UK is highly unlikely to commit a chemical attack or an assassination on Russia and risk losing the moral high ground.

So, given that the UK feels it has saved face and the Russians are unlikely to escalate the situation any further, the crisis could now blow over and we can all move on.