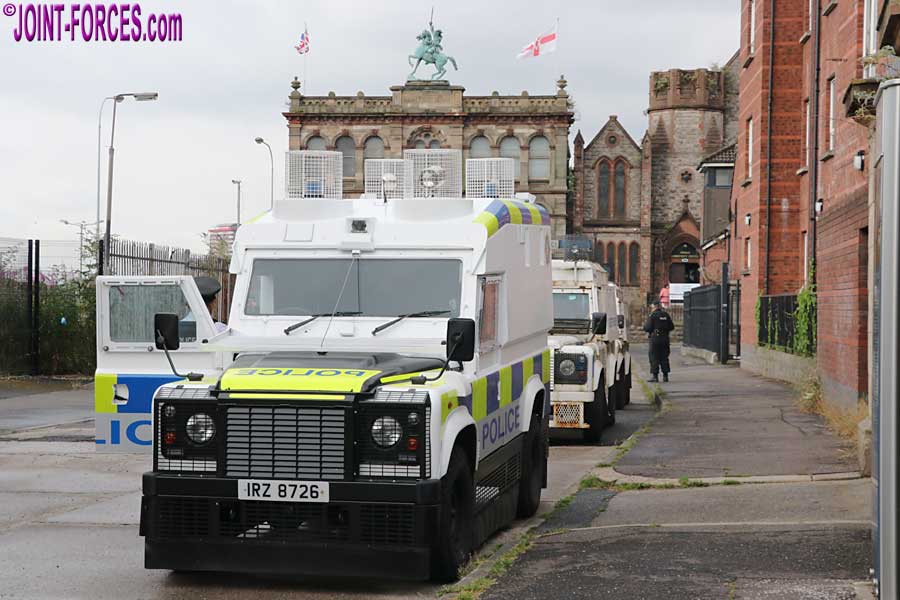 The Penman ALR, here with two Tangis behind, is the youngest armoured Land Rover on the PSNI fleet [© Bob Morrison]

Today, 12th July, is the one day in the year that one can guarantee a high percentage of the PSNI (Police Service of Northern Ireland) fleet of unique armoured Land Rovers will be out on the streets to ensure that the rights of both Loyalist and Republican citizens are upheld.

As previously mentioned (see Police Armoured Land Rovers ~ Ulster Album) I am presently delving deep into my archives to tell more of the Armoured Land Rover story before the 60th anniversary of the ‘fag packet’ design of the first Shorland prototype by the former Royal Ulster Constabulary’s vehicle workshops team in Belfast. To do this story justice I needed to ensure that I had the most up-to-date images of the force’s Land Rover fleet to compliment my library of original photos documenting the breed dating back to 1988, which will be supplemented by earlier official police photos,and today provided the perfect opportunity. I do not plan to get ahead of myself by saying much more on this topic at present, but I promised officers that I would upload a couple of today’s shots at the earliest opportunity, so here we go.

Footnote: I am well aware that Police Land Rovers are not Military Land Rovers, but rather than creating a whole new section of the website for them I have decided this section is the best place to put such articles.