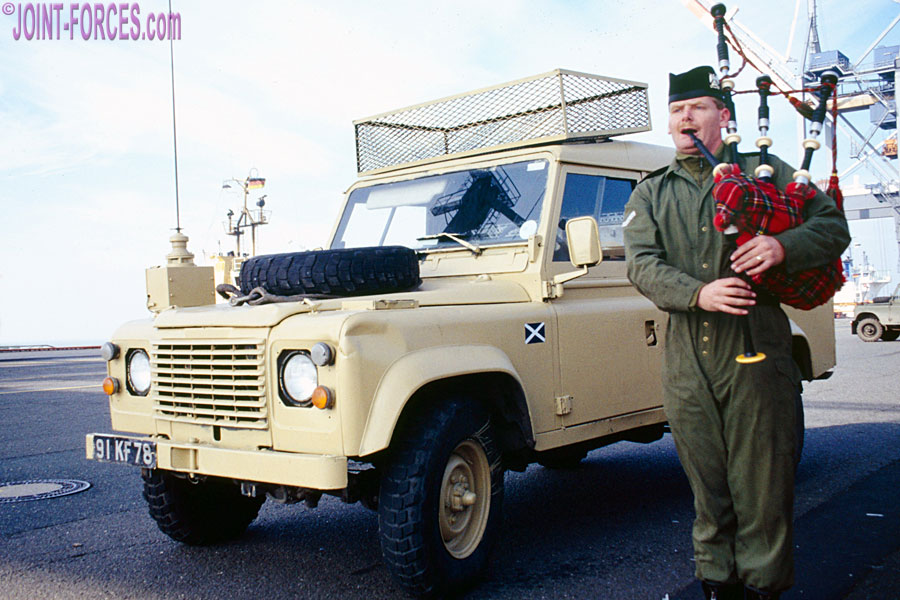 Thirty years ago a major part of the British Army of the Rhine began deploying from Germany to Saudi Arabia on Operation GRANBY, writes Bob Morrison.

Op GRANBY was the British contribution to the American-led DESERT SHIELD operation to help protect the crucial Saudi oilfields after Saddam Hussein’s forces unexpectedly invaded neighbouring Kuwait in August 1990 and it looked likely they might continue push on south if not challenged. British deployments commenced less than ten days after the Kuwait invasion, with a squadron of RAF Tornado jets being speedily deployed to Dhahran Air Base on the Persian Gulf side of Saudi Arabia, with a British Army advance party following a little later.

To cut a protracted story short, by mid-September 1990 it was clear that diplomatic efforts to persuade Iraq to withdraw its forces from Kuwait were not bearing fruit and it was increasingly looking like a multinational military Coalition was going to be needed to help the Kuwaitis regain their country. In response to UN Security Council Resolution 667, the UK Minister of Defence of the time announced the intention to move the first major part of 1st [UK] Armoured Division, drawn from 7th Armoured Brigade, from Germany out to eastern Saudi Arabia. The bulk of the equipment deployed in the first major tranche was drawn from Desert Rats units garrisoned at Bad Fallingbostel (usually just called Fallingbostel or Fally) in Lower Saxony and was either moved by the Royal Corps of Transport or RCT (since 1993 part of Royal Logistic Corps) if tracked, or travelled on their own wheels, around 140km by road to Bremerhaven Docks on the North Sea coast. Six weeks later, on 15th November, the brigade was declared Fully Operational in the desert sands.

Invited by BAOR to cover the armour departing Fallingbostel at the end of September, which as I was still in full-time employment fortunately fell over a weekend, after work on Friday I headed off from my Somerset workplace to Dover to catch the midnight car ferry to Ostend where, with four hours of kip to refresh me, I then started the 600km drive from Belgian port to German garrison. Over the next few days over 100 Challenger Main Battle Tanks from the Queen’s Royal Irish Hussars and the Royal Scots Dragoon Guards, plus Warrior Infantry Fighting Vehicles from 1st Battalion of the Staffordshire Regiment, accompanied by Royal Engineers and REME supporting armour, were loaded onto tank transporters for the road convoys to Bremerhaven. After photographing the loading on the WWII-era cobbled garrison square I headed off up the autobahn to get ahead of the tank transporters at the port, where the majority of the photos on this page were taken.

My primary interest at this time was in photographing the Land Rovers being deployed on Op GRANBY, as I had a regular monthly magazine column to fill, though of course where film stocks allowed I also photographed lots of other vehicles as it would have been silly not to do so. The coil-sprung One-Ten, introduced in the mid-1980s, was the primary Land Rover model deployed from Germany by the Desert Rats, but a few earlier leaf sprung Series III models and a packet of FC101 (101” wheelbase Forward Control) ambulances were also lined up on the docks at the time of my visit. Those Rovers belonging to the armoured squadrons and the infantry battalion had be resprayed in plain Desert Stone, just like the tracked vehicles, but RAMC (Royal Army Medical Corps) and RMP (Royal Military Police) Land Rovers were still in their original two-tone NATO Green and Black colour scheme.

In the autumn of 1989 I had become quite friendly with a Military Police team I kept bumping into marshalling military convoys on a major NATO exercise in Germany, and at the time the guys took some magazine stickers from me to adorn their new One-Ten Land Rovers. While strolling with camera down a line of vehicles waiting to embark for The Gulf I noticed one was sporting an LRO sticker I had given out the previous year and I soon got chatting with the guys. A little over three months later Sergeant Andy Bridges and his NCOs would come to the rescue of my hire car bogged down in the desert sands in Northern Saudi; as no 4×4 hire vehicle were available by the time I made it out to Dhahran in January 1991 I only had a conventional 4×2 to get around in for most of my assignment in the original sandpit. Incidentally, in 1996 I was to bump into one of the MP corporals, by then a sergeant, on operational deployment with a One-Ten in Bosnia. It’s a small world.

If all goes to plan I will return to the subject of Gulf War 1 Land Rovers around the 30th anniversary of the start of Op DESERT SABRE, the land campaign to free Kuwait.

Footnote: Back in the autumn of 1990 Margaret Thatcher was still Prime Minister, though only just, and publicity for the UK Armed Forces was positively welcomed – something that has seemingly now been forgotten by today’s MoD civil servants who appear to be more interested in running propaganda-like ‘campaigns’ and promoting ‘messages’ than allowing simple independent and unbiased media coverage. When I sought permission from the British Army to photograph vehicle departures from Fallingbostel and their embarkation on Ro-Ro ferries at Bremerhaven I was welcomed with open arms, which paved the way for the opening chapter of my March 1991 photobook British Land Rovers In The Gulf. It would be great to return to the days when substance took precedence over spin, but sadly I doubt this trendency of ‘grey suits’ spinning stories rather than allowing simple journalistic reporting can now be reversed.