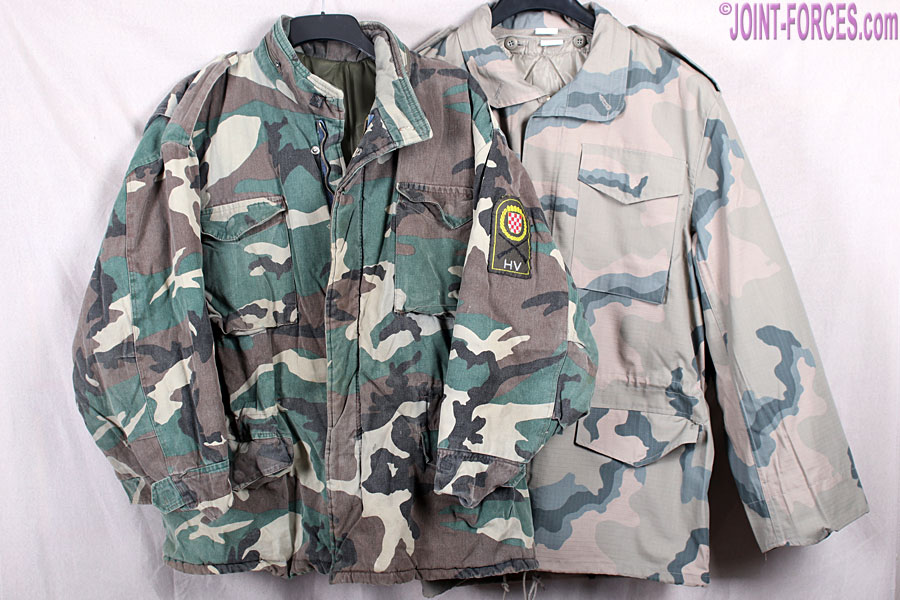 This article on the classic US M-1965 Field Jacket, derivatives of which have been widely worn for over 50 years, was prompted by a camouflage conundrum, writes Bob Morrison.

Those who have read the previous two articles in this section (linked below) will be aware that the field jacket with the unusual camo pattern seen on the right in the lead image has now been tentatively identified as being of Saudi Arabian origin, though possibly not manufactured there, and it has been tailored in the US M-1965 design. As it is now several years since the M-65, as it is often abbreviated to, jacket was dropped from the US military inventory it seemed logical to look a little closer at this design which has also been used by many armies around the globe for over a half a century.

Originally produced in Olive Drab (OG 107) the Vietnam War era M-1965 replaced the Korean War era M-1951 Field Jacket, which itself replaced the WWII era M-1943 Field Jacket; each replacement incorporated more advanced features but all three versions were essentially shirt-like outer garments with four front pockets. When the US Army changed from plain Olive Green to M81 Woodland camouflage Battle Dress Uniform the M-1965 jacket changed with them and in the 1990s a three-colour ‘coffee stain’ Desert Camouflage Uniform version was produced, then when digital Universal Camouflage Pattern was introduced in 2004 an M-1965 Field Jacket in this digital camo with only minor detail changes was issued for a few years. By the end of that decade, however, issue of this well-liked jacket finally ceased.

The accompanying detail photos of the four-colour ‘camo conundrum’ garment show the identifying features of the typical M1965 Field Jacket, which has a removable quilted liner, tuckaway lightweight inner hood, drawcords at waist and hem, and fold-out cuff extensions to cover any gap between gloves and jacket at the wrist. A button-on hood matching the jacket outer fabric (i.e. camo or plain olive green) was usually also issued but I do not have one of these to photograph in any of the three camo patterns. Lockdown and social distancing has also meant I cannot put the jackets on a person, so please excuse the coat hangers. Studio flash was used throughout.

The Croatian version of the M-1965 Field Jacket in Woodland pattern, which I have owned for over 20 years, has a stitched-in rather than button-in liner and the zips and buttons are of local manufacture, but otherwise basic tailoring is to US specification. Although I do not have an American M-1965 Field Jacket in my collection, which I downsized a few years back, I do have another version in what might be Italian Mimetico Roma 90 though I stand to be corrected; unfortunately this one had its labels removed before I found it so I cannot be certain. M-1965 has certainly been a popular jacket design.