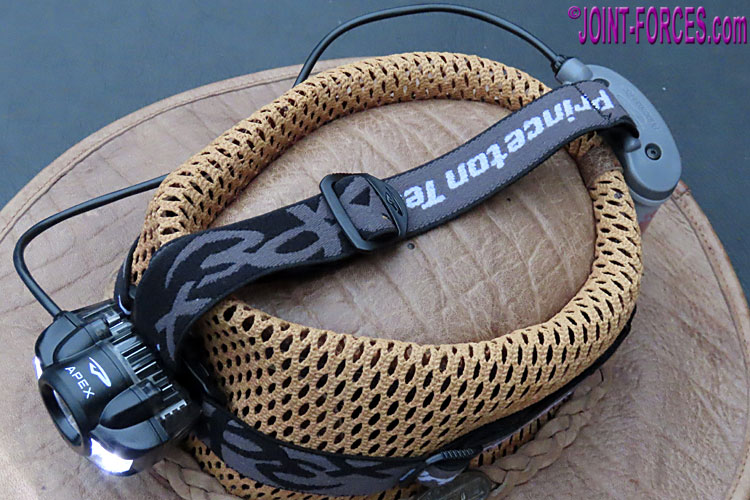 The waterproof Apex LED Head Torch, aimed at the outdoorsman and caver, is the largest and brightest headlamp in the Princeton Tec Professional series, writes Mike Gormley.

We are in that time of year (in the northern hemisphere) when we are most likely to need mobile light. Princeton Tec is a well known name in the world of head torches and this is the top of their range, and at 275 lumens the brightest.

As well as being powerful the APEX is also waterproof. It has a four AA battery pack on the back of the headband to balance things up a bit, but these four batteries give it some serious potential durability which extends to over 100 hours burn time dependent on the light levels in use. You can fit either conventional AA batteries or rechargeables.

There is the option of turning on just the main single Maxbright LED, which can be used on one of two power levels, or the four smaller Ultrabright LED set-up which also offers two power levels and plus a flash mode on full power; this would certainly attract attention from a long way off. This head torch has the ability to provide a serious amount of light on full power as well as a very useful, and less power hungry, working light when you do not need to light up a huge underground cavern or see across a wide river or valley.

The two operating buttons require a firm press and are a bit unusual in that they are located on the bottom of the head torch, so a thumb is more appropriate as the switching digit. For those not wearing gloves, the switches have ID markers a bit like Braille. Clearly aimed at those who will use in the wet and in rugged conditions, there is an alternative rubber headband supplied which is suitable for helmet use, as well as the more conventional adjustable headband with an over top of the head strap for additional support.

The Apex LED Head Torch, which is made in the US by Princeton Tec, is available in the UK many good outdoor shops and military outlets or direct from Kendal-based Whitby & Co. who are the British distributors. A red version of the APEX is also available for those who require a more visible and less tactical head torch.