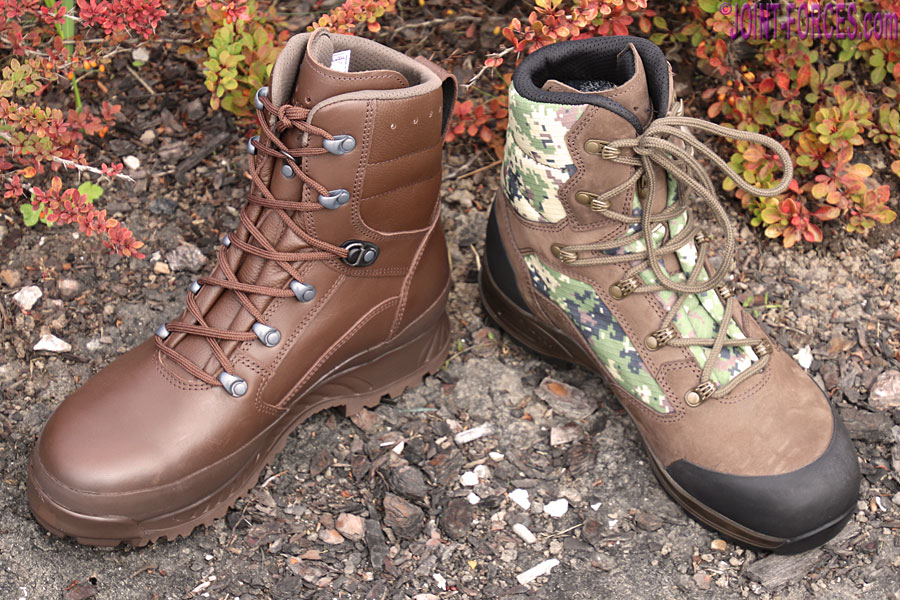 In my previous two footwear articles from the Polish defence exhibition in September, which turned out to be the last military expo of note in 2020 as the autumn resurgence of COVID-19 forced the cancellation of further European and MENA shows, we took a look at some forthcoming updates to highly popular existing HAIX models and at a pair of in-service models worn by Danish military personnel. The two boot examples on this page will hopefully give the reader a glimpse at solutions the HAIX designers have created for future markets.

Although these two boots look very different at first glance, one being full leather while the other is a combination of Nubuck and textile, there are quite a few parallels in their construction and both borrow well-proven elements from other successful models in the existing wide HAIX combat and patrol boots range. The brown boot here has been developed for a very specific NATO nation requirement for a Summer Combat Boot (this country’s Winter Combat Boot is a highly insulated waterproof model) and the boot with the camo pattern fabric uppers is aimed at specialist niche market customers; the camouflage pattern is generic as each nation would specify its own preferred camouflage.

Turning first to the brown boot, if you look closely you will see that this is an evolution of the former HAIX version UK MoD Boot Combat High Liability or BCHL which was procured under the 2012 five-year contract. It is manufactured in full leather, rather than with the Cordura panels used on the UK BCHL, but the collar of this boot designed specifically for the requirements of an undisclosed NATO customer is made from a very soft leather for greater comfort. This design change came about as a result of feedback gathered from users of the previously mentioned British boot, who felt that the collar of the BCHL was a bit too ‘stiff’ when compared with the other boot model in the category on official issue between 2012 and 2018; having worn all ten boot models ordered under that UK MoD contract, my own opinion is that the three HAIX models chosen by DE&S at the beginning of this decade were indeed rather stiff in the collar region.

The outsole used on this brown ‘undisclosed NATO MoD’ boot is the same well-proven Davos antistatic slip-resistant pattern version as the HAIX UK BCHL, but the protective rand (the strip between combination sole and upper) is not quite so high and does not cross the top of the toecap. The lacing system is identical to that of the UK BCHL and has the unique locking D-ring eyelet at the fourth position to give very effective two-zone locking. This boot design is so new that I have not yet been able to field test a sample pair, but from past experience of many HAIX combat boot types I am confident it should be well fit for purpose as a North European summer issue combat boot.

Now to the camo boot. Personally I do not see the point of using a camouflage pattern on boots, as out in the field where camouflage is really needed the feet are the one part of the body that often blends best with the local terrain once the wearer has spent a couple of days on the ground but some armies, and particularly their specialist units, disagree with me. Leaving aside the issue of whether camo pattern boots are effective or are just a bit of a fashion statement, this prototype clearly has much in common with the new HAIX Airpower P3 model though the uppers above the ankle strap are all-textile. The outsole is the same black Vibram type as used on the Danish Combat Boot Heavy and Nubuck (outer surface suede) leather is used for the lower part of the uppers which suggests this boot model may be targeted at countries with hot climates and little standing water. It is also noticeable that a heavy protective rand has been added to both toe and heel areas, suggesting rocky terrain, such as desert scree, might be expected by the potential wearers.