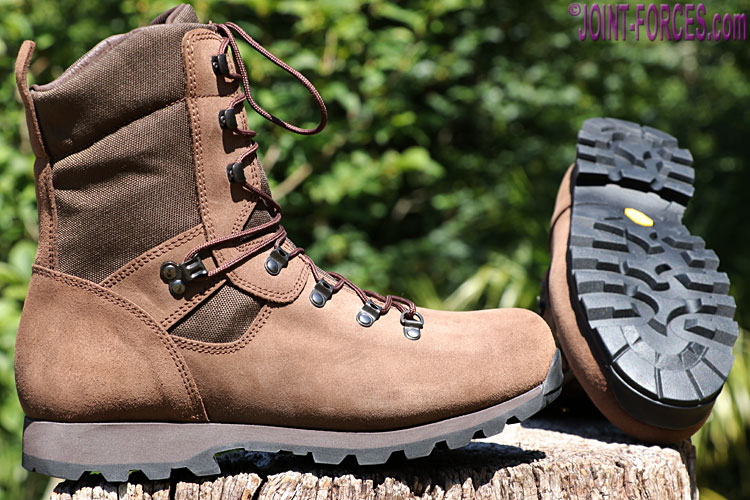 It may surprise some readers to learn that I have worn various evolutions of ALTBERG Desert Boot since the spring of 1997, when I participated in the Toyota Desert Raid in the Tunisian Sahara and won the Golden Shovel Trophy for the first time; over 23 years later I still have that trophy sitting on my work desk, used as a paperweight, and I still have my original ALTBERG ‘desert wellies’ to this day, occasionally carrying them in my bergen as back-up footwear to give my feet a break at the end of a usually very long day.

A little before the pesky pandemic screwed up my travel plans, I ordered the boots I am focussing on here with the intention of wearing them when visiting KASOTC (King Abdullah II Special Operations Training Center) in Jordan to cover the 12th Annual Warrior Competition. This Desert Ultra Lite Tabbing Boot model from ALTBERG has actually been around for a couple of years but as my assignment rota usually only allows me to cover alternate year AWCs out in the Hashemite Kingdom and as I took the then new Iturri British Army issue Desert Combat High Liability boot with me in 2018, plus my packed NATO exercise coverage schedule prevented me slipping in a trip to the desert in 2019, I set the offer to test this new boot to one side for a while. The sudden lockdown in March put paid to both 12th AWC and delivery of my new boots, but when the thermometer in the UK looked to be heading above 25C at the end of May our friends up in Yorkshire couriered them down to Devon.

The Desert Ultra Lite Tabbing Boot, as its name suggests, is closely related to the popular ALTBERG Tabbing Boot and is described as being a “lightweight military desert boot based on running shoe technology and dynamics”. Although a version of the Yorkshire Bootmakers’ popular Desert Microlite Boot, which I have also worn since its inception, the Desert Ultra Lite is manufactured on the company’s own AForme last design which was developed by their Founder and Master Bootmaker, using running shoe dynamics and technology. According to the man himself, he designed the boot lower to enhance mobility when running on desert terrain and with a compound sole composition to give good torsional stability and shock absorption.

The original mid-1990s ALTBERG Desert Boot, which was derived from a traditional jungle boot design altered for a British Army unit deploying on exercise to Oman, was unlined as breathable footwear membranes suitable for high temperatures were not widely available a quarter of a century ago. The footwear world has moved forward a quantum leap since then and as a result the Desert Ultra Lite model is lined with very comfortable ultra breathable Cambrelle non-waterproof membrane which does not retain moisture. Still on the inside, the high density cushioned polyurethane removable Airgrid Beige shaped footbed, or insole, has an open grid mesh with zero moisture retention top layer and a 1mm thick felt bottom layer for comfort and to assist the foot to bed in.

The Desert Ultra Lite boot’s uppers are a combination of 2.0mm full grain European suede and breathable military grade Cordura fabric. The bellows tongue, which is Cordura with a suede central section, is full height to keep out sand and dust. Both the top of the tongue and the inside of the collar are soft leather for comfort. Although the cut of the Desert Ultra Lite is a little lower than previous ALTBERG Desert Boot designs, it is still a little higher than the current UK MoD issue desert boots; although I usually prefer a lower mid-height boot for general wear, I actually like a tightly laced higher boot for soft desert sand so I can see why the designer has resisted the temptation to follow current trends.

Turning now to the outsole, this is the well-proven Vibram Masai rubber sole with lightweight, shock absorbing mid-layer. This is the same sole used on the latest version of the ALTBERG Desert Microlite boot and while not specifically a sand pattern, it is a very good all-rounders and is great at self-cleaning. Ask the average guy in the street to draw a desert landscape and the chances are they will come up with a picture resembling the windblown sand dunes of the Erg Chebbi in Morocco, on the north-west edge of the Sahara, but in reality more of the world’s desert terrain is rocky than sandy. The Vibram Masai takes most desert terrain types in its stride.

Now to the lacing, which is pretty standard 8-eyelet position. Of course true eyelets, or grommets, are seldom used on combat boots these days and open or closed lace hooks and D-rings are more the norm. Currently UK MoD specifies closed hooks throughout for combat boots but while ALTBERG comply with this request on government contracts, the Master Bootmaker has stated he believes using open upper lace hooks allows a better fit on the leg so that is what he prefers to design as standard on his boots. Hence on each side the Desert Ultra Lite has a D-ring at the bottom, three closed hooks, one open locking hook at the mid point, and three upper open hooks. A diagram showing the recommended method of lacing is enclosed with new boots, along with a boot care leaflet and a product range catalogue, and it is stressed that to ensure proper fit laces should NOT be crossed between fourth and fifth hook positions. Until recently, through habit I always crossed my laces at this natural flex point of the foot, but during the latest trial I followed the maker’s recommendations and I instantly noticed the difference. Okay, I admit it can take a long time to knock sense into my thick skull.

ALTBERG Desert Ultra Lite Tabbing Boots, unlike their Desert Microlite Boots which are off-the-shelf, are comparatively low volume so are only Made To Order. That said, both desert boot boot types retail for exactly the same price. They are available in half sizes from UK4 to UK14. To learn more about the AForme last, take a look at the video below.