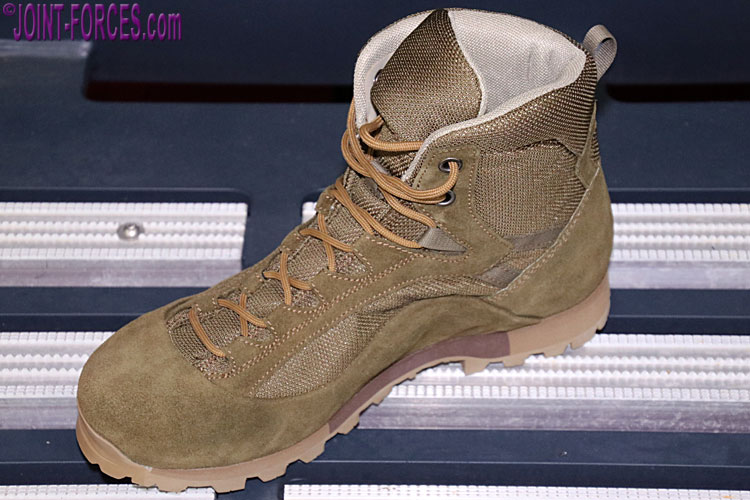 At the MiliPol police and security expo held in Paris in November we were given our first look at the new AKU Pilgrim TSC DS desert combat boot model, writes Bob Morrison.

The latest evolution of the Pilgrim family of boots, which was originally conceived by TREKITT of Hereford in 2012 to meet a specific request by some of their local customers for a light boot like the AKU Navy Seal but which had a more robust Vibram outsole, the AKU Pilgrim TSC DS model is a mid-height, mid-weight desert boot with revised lacing arrangement.

According to company literature AKU designed the Pilgrim TSC DS model together with “the Army’s Special Forces”, though they do not specify which Army, “for hot climates and desert fields”. They describe the uppers as having malleolus (ankle bone) protection inserts and state that this boot has antistatic construction and anti-slip treading, as well as internal foot protection designed for fast-roping. Published technical details give the uppers as being constructed of 1.8mm suede leather and Air8000 fabric (for breathability) and the outsole is Vibram Curcuma pattern moulded from the Tront compound, as used on some AKU and ASOLO mountaineering boots. The midsole is die-cut EVA, the lasting board is a combination of 2mm nylon, die-cut EVA and anti-puncture fabric, and the footbed is anti-static EVA. Weight per boot is given as being 580g (presumably for a middle of range UK8) which is 20g less than the standard UK MoD Brown Pilgrim DS model.

The Pilgrim TSC DS is described by the manufacturer as being unlined and it does not have a Gore-Tex membrane. Visually, the two things (other than the different sole pattern) which immediately strike the eye when comparing the Pilgrim TSC DS with the current UK MoD issue Pilgrim FG model are the upper lacing and the lace pocket on the tongue. As should be obvious from the photos, the new desert boot has two pairs of conventional eyelets at the top and the lace lock at the flex point (position 6 of 8) has been replaced by a tape eyelet. The tongue, complete with the new lace pocket, also stands well proud of the collar.

At time of writing we have not yet been able to wear test the new AKU Pilgrim TSC DS boot to bring readers a fuller review.