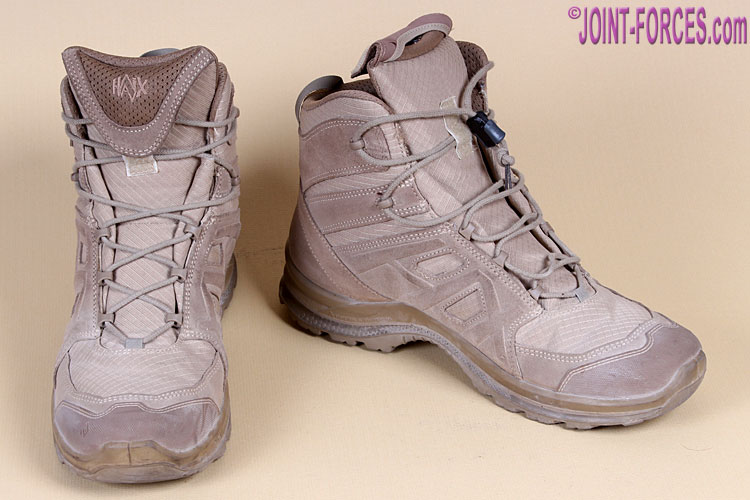 In late April I took a pair of Black Eagle Athletic VT Mid desert boots from HAIX out to KASOTC (King Abdullah II Special Operations Training Center) and SOFEX in the Hashemite Kingdom of Jordan to trial them in realistic hot & arid conditions.

Over the last three or four years I have both tested several different boot types from the Black Eagle range, visited both of the company’s manufacturing plants in Bavaria and Croatia, and watched keenly as this design has evolved into a second generation. The 2.0 in the name indicates this is a second generation boot.

My original Black Eagle desert boot was one of a new range from four combat boot makers (three German and one Turkish) partnered with W.L. Gore & Assoc. to introduce their new range of revolutionary Gore-Tex lining laminates designed to operate in high temperatures and was manufactured in Vietnam, but this new generation 2.0 boot is both all-European in manufacture, produced at the state-of-the art HAIX factory in Mala Subotica in Croatia, and also of non-membrane construction for those who prefer this (new generation Black Eagle Gore-Tex membrane desert boot versions in both mid and high cut are also available for those who prefer it or need footwear which can keep out pathogens).

Latest generation (2.0) boot on left and original on right – there have been various minor detail changes to further improve an already good boot [© Bob Morrison]

One of the Black Eagle Athletic range – there are also Adventure, Safety and Tactical ranges sharing many common features – this lightweight, mid-height boot’s uppers are constructed from a combination of full-grain suede leather velour and hard-wearing air-permeable textile. Its HAIX Climate System construction draws warm air upwards and away from the foot on each step for comfort in hot weather use – no complaints from me on that score – and the integrated removable and antibacterial absorbent insole is designed to direct any moisture downwards and away. The lining is abrasion-proof and the midsole is designed to cushion weight, relieving joint strain, and a separate heel cup stabilises and supports the foot inside the boot.

New (left) and old composite sole treads have many similarities – as you can see from the weathering and wear, we really do wear our test samples [© Bob Morrison]

The durable rubber composite anti-slip outer sole, of the company’s own design and manufacture, provides a deep tread for stability on all types of terrain; again, no complaints from me on that score. It is also DIN EN 20347 certified and resistant to oil and petrol.

The fast lacing system has five pairs of non-metallic lace tunnels with tapes at the base and near the top of the well-padded bellows tongue plus HAIX‘s unique fast lacing system with tongue pocket for stowing lave ends. I have been using this second generation lace locking system pretty much since its inception – I proffed a couple from the factory – and I really like it; note that the brown Nepal Pro and French Army combat boots use the first generation lock, which is larger though a little slimmer, and I have found that one to be long lasting, but whenever possible I try to fit the newer two-tone lock to boots I am wearing regularly.

As mentioned in my previous brief update, I wore these lightweight boots for all but four days of my 14-day assignment out to Jordan for WARRIOR COMPETITION / MESOC / SOFEX 18, including while travelling by rail, plane and hire car as well as for long days out on the ground at KASOTC and almost equally long days at SOFEX. I also wore them every night but one in downtown Amman – for a British Embassy evening reception I had to slip on black boots instead as Desert Tan does not really go with flannel trousers – and felt like I was wearing carpet slippers most of the time, irrespective of whether it was quarry or tarmac underfoot. In short, I had no issues whatsoever, despite the varied use in rather hot circumstances.