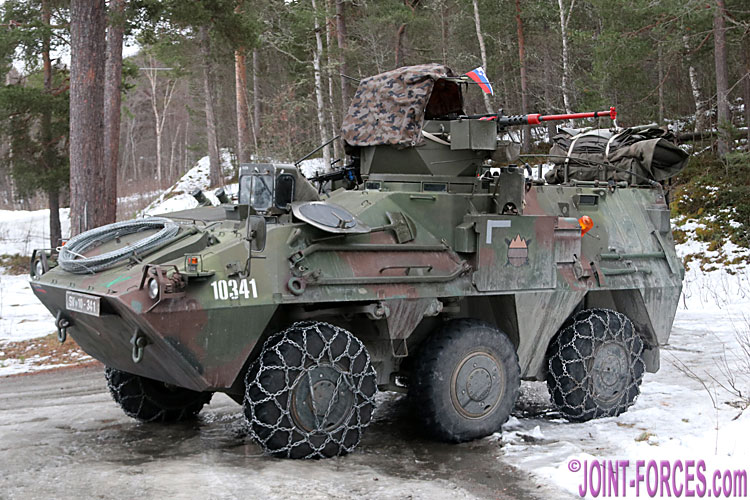 For this latest instalment our NATO Exercise TRIDENT JUNCTURE 2018 (TRJE18) coverage we are now focussing on the Slovenian VALUK 6×6 APC, writes Bob Morrison.

Those who are proficient at recognising relatively obscure European armoured vehicles will have spotted that the VALUK bears a very close resemblance to the PANDUR 6×6 Armoured Personnel Carrier designed by Steyr-Daimler-Puch for the Austrian Army and also built under licence in both Belgium and Kuwait for their armed forces; at the start of the millennium US Special Operations Command also ordered a batch of up to fifty, known as the Armoured Ground Mobility System or AGMS, for use in Iraq.

Designed in the mid-1980s, the PANDUR 6×6 is itself a derivative of the 1970s Spanish Pegaso BMR (Blindado Medio sobre Ruedas which approximately translates Armoured Medium Wheeled) 6×6 armoured personnel carrier which has been widely used by the Spanish Armed Forces since 1980. The VEC M1 (Vehículo de Exploración de Caballería or Cavalry Reconnaissance Vehicle) used by Spanish cavalry units is an upgraded variant of the BMR with a two-man turret mounting a 25mm Bushmaster chain gun and coaxial 7.62mm machine gun; this five-man variant has been used by Spanish troops on peacekeeping missions in the Balkans and the Middle East as well as being deployed operationally in Iraq. The VALUK is an upgraded, licence-built version of the PANDUR manufactured in Slovenia by Sistemska Tehnika ARMAS which has been operationally deployed in Afghanistan on ISAF duties.

The Slovenian VALUK APCs deployed on Exercise TRIDENT JUNCTURE 2018 (TRJE18) in Norway last October and November formed part of the Spanish-led Battle Group ‘Lepanto’ which was itself part of the Italian-led South (Blue) Force multinational brigade operating on the westernmost axis. In an excellent presentation at the International Armoured Vehicle Conference (IAV) 2019 held in London in January Brigadier Aroldo Lázaro Sáenz, who commands 10th Brigade ‘Guzmán el Bueno’ which contributed to the Italian-led VJTF (Very High Readiness Joint Task Force) throughout 2018, and Lieutenant Colonel Gabriel Villalonga, who commanded Battle Group ‘Lepanto’ (and whom we met in the field in Norway) explained how mechanised infantry contingents from Slovenia and Montenegro were fully integrated with the Spanish battlegroup for TRJE18 to:-
¤ ensure that NATO forces are trained, able to operate together, and ready to respond to any threat from any direction.
¤ validate NATO’s ability to plan and conduct a major collective defence operation under an Article 5 scenario.

Known as the LKOV 6×6 (Lahko Kolesno Oklepno Vozilo or Light Wheeled Armoured Vehicle) the VALUK is the most numerous of Slovenia’s wheeled armoured personnel carriers; they also operate a smaller fleet of SKOV 8×8 Patria AMV SVARUN medium wheeled armoured vehicles. According to official Slovenian Army sources, the VALUK has a combat weight of 13.5 tonnes and measures 5679x2500x2005mm to the top of the hull. It is powered by a Steyr 6-cylinder turbo-diesel engine developing 191kW (256hp) at 2400rpm and the manufacturer gives its top road speed as 100 km/hr and a potential range of up to 700km.

The basic APC version is crewed by three – commander, gunner and driver – and can transport six troops in the rear, though as can be seen from the photo it is a bit like a sardine can in there when all dismounts are wearing body armour. Primary armament is either a 12.7mm heavy machine gun or a 40mm automatic grenade launcher in an armoured cupola. For self defence two banks of three smoke dischargers are positioned on the upper right hull side.

A three-man Scout or Cavalry variant with a 25mm Bushmaster automatic canon in a Rafael OWS (Overhead Weapon Station), an NBC Recce variant, and a four-man Mortar Carrier from which a 120mm mortar can be fired, have also been proposed. However according to the manufacturer’s website, they are said to be still in development and none of these yet appear to have entered service.

The Ambulance variant of the VALUK, known as the LKOSV 6×6, is crewed by three (commander, driver and medic) and can be speedily reconfigured from four-stretcher layout to carry either six ambulant casualties of two stretchers plus three seated This version has a raised roof over the casualty compartment (2610mm) and is slightly longer (6315mm) with a longer wheelbase between second and third axles and longer rear overhang. At least one LKOSV ambulance was deployed to Norway for TRJE18.

The accompanying VALUK infantry vehicle images on TRJE18 were taken on two consecutive days at locations about 85km apart, to the west of Oppdal and around Folldal. They have been selected to give a variety of views to help military modeller readers. The LKOSV ambulance was photographed a couple of days earlier at the Distinguished Visitors Day static display near Trondheim, but as it was impossible to get decent walk-round images of this vehicle I have also included an uncluttered official Slovenian MoD photo of three ambulances viewed from the front.