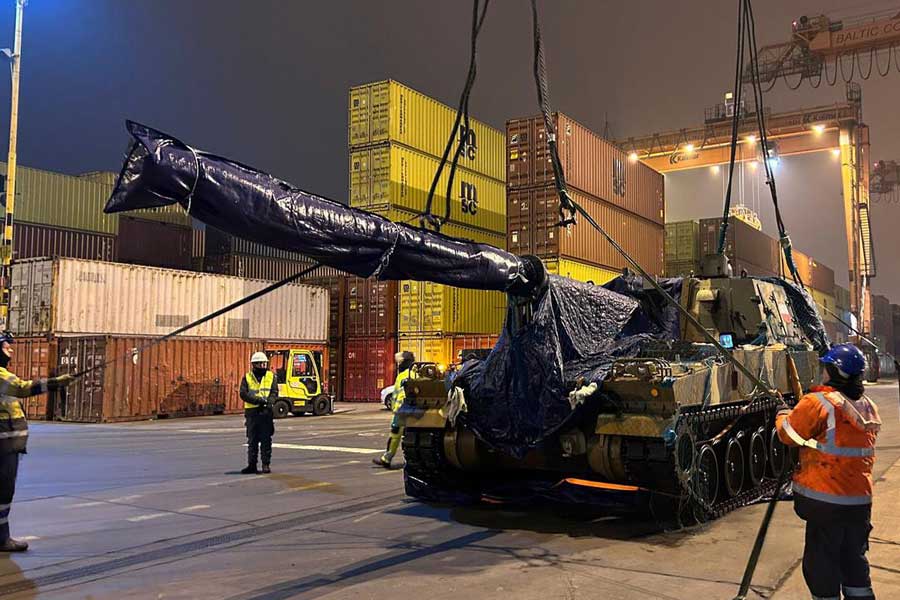 Press Release, Seoul, 6th December 2022: Hanwha Aerospace has successfully delivered a batch of 24 K9 Self-Propelled Howitzers to the Polish Armed Forces, meeting the requirements of the Polish deterrence capability. Upon arrival on December 5, the155mm/52-calibre howitzers, called ‘K9PL’, were unloaded from a cargo ship at the Port of Gdynia where a reception ceremony was to take place.

The official ceremony was held on December 6 to celebrate the arrival of K9PLs, with the attendance of Polish Government leaders including President Andrzej Duda and Defence Minister Mariusz Błaszczak.

“The handover of K9PLs is a key milestone in the development of partnership between Hanwha Aerospace and the Government of Poland,” said Lee Boo-hwan, head of Hanwha Aerospace’s European business. “Meeting the requirements of the Polish Armed Forces is our top priority, and we’re proud of having produced and delivered the best-quality equipment to Poland so quickly.”

The K9PL delivery took only about three months after an executive contract was signed in late August. Under the first executive contract, Hanwha will deliver hundreds of K9PLs by 2026, with plans are also in place to manufacture hundreds of more K9PLs in Poland from 2026 in cooperation with Polska Grupa Zbrojeniowa (PGZ), the largest defence group in Poland, which also manufactures the Krab Self-Propelled Howitzer.

In addition, Hanwha Aerospace also plans to build an advanced MRO centre in Poland to provide efficient logistics support to Poland and other K9 user countries across the European region.

“There is no doubt Hanwha Aerospace is the most reliable partner for Poland to contribute the Polish defence capability and industry growth,” said Son Jaeil, President and CEO of Hanwha Aerospace. “Hanwha is committed to making Poland as a hub for the supply of K9 systems in Europe based on stronger partnership with the Government of Poland.”

With the expansion of countries operating K9 artillery systems, Hanwha launched the K9 User Community in April 2022 to share experience on the operation of the K9, including logistics support capability. K9 user countries include South Korea, Turkey, Poland, India, Finland, Norway, Estonia, Australia and Egypt. The K9 Thunder is the world’s most popular tracked self-propelled gun with over 2,000 units are already in service around the globe. The howitzer can deliver consistent, accurate, rapid effects at +40km range with high rates and volumes of fire. In particular, the K9 is optimised for ‘Shoot-and-Scoot’ capability to fire multiple rounds and immediately move to a different location to avoid potential counter-fire. In a recent milestone, the K9 and K10 Ammunition Resupply Vehicle were successfully tested by the US Army to prove their compatibility with various US munitions. The test was conducted at the Yuma Proving Ground in Arizona in mid-September 2022 to fire different types of US munitions including 155mm M795 projectiles and XM1113 Rocket Assistance Projectiles.