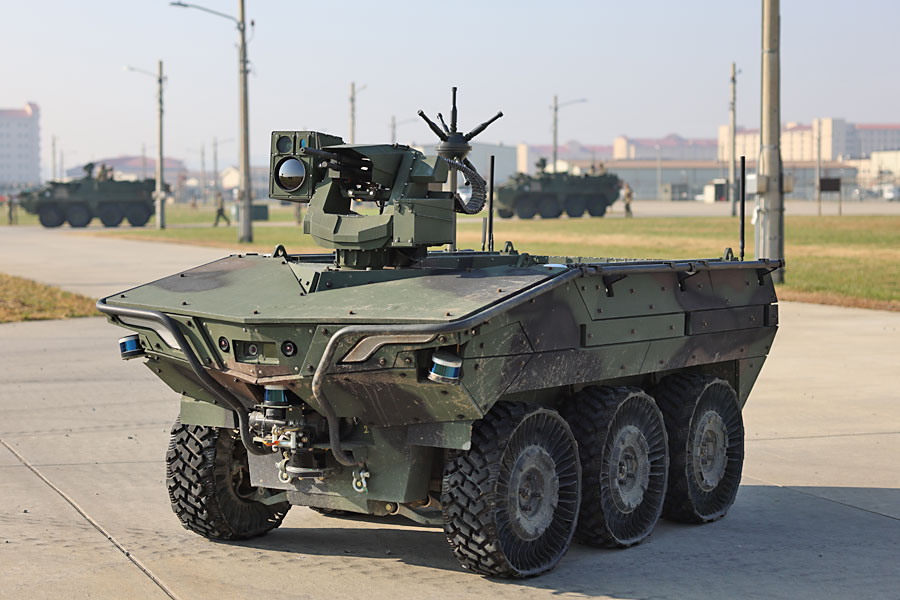 The demonstration of the 2-ton UGV took place on November 29 at Camp Humphreys, the world’s largest US military installations located in Pyeongtaek, about 70 kilometres south of Seoul. Hanwha Aerospace and the US Army Combat Capabilities Development Command (DEVCOM) Ground Vehicle Systems Center (GVSC) have been in conversation for potential collaboration on next-generation UGV technologies for some time.

During the technology showcase, the Arion-SMET proved a variety of unmanned technologies supporting infantry troops in the battlefield, such as remote-controlled and autonomous driving both on paved and unpaved roads; obstacle avoidance; autonomous homing for communications failures; gun-shot source localisation; and vehicle/soldier following.

“The Arion-SMET has already proved its outstanding mission capabilities during a ROK Army trial earlier this year under a programme to test the performance of weapons systems for overseas exports,” said Executive Vice President Youngwoo Seo at Land Systems Business Group of Hanwha Aerospace. “We will do our best to successfully complete the upcoming FCT, hoping to join US DoD’s fast-track acquisition process in the future.”

In October, the Arion-SMET was chosen one of the ground equipment to be tested by the US military under the FCT programme aimed at assessing matured foreign technologies that can fill US forces’ existing capability gaps. It is the first time a Korean-built unmanned ground system is participating in such a field test programme. The Arion-SMET (Autonomous and Robotic systems for Intelligence Off-road Navigation – Small Multi-purpose Equipment Transport) is based on a previous 4×4 UGV developed in 2019 from a joint civilian-military project in South Korea.

The 6×6 electric-powered vehicle was built to support infantry operations, such as ammunition transport, medical evacuation, reconnaissance, and fire support. The vehicle can drive up to 100km when fully charged and has a maximum payload capacity of 550kg, significantly improving its combat support and manoeuvring capabilities. It is also equipped with an advanced remote-controlled weapons station that can detect/ track enemy soldiers, localise the source of gunfire and fire back in the direction of the gunfire coming from. With these innovative functionalities, the Arion-SMET is optimised for supporting manned and unmanned teaming (MUM-T) operations for infantry troops.