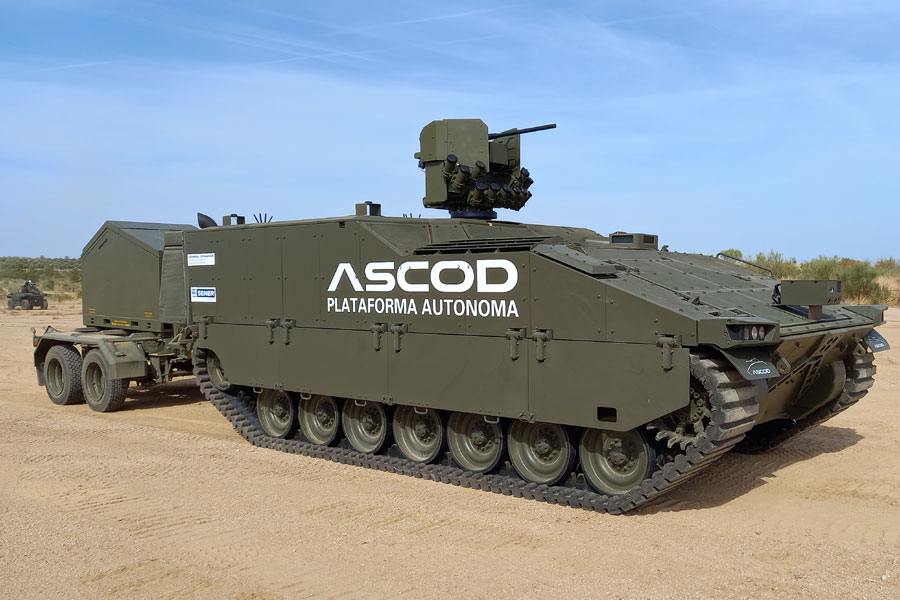 The display of the ASCOD system as an optionally manned platform, in this case on rubber tracks, was carried out as part of the dynamic demonstration held on October 10 th within the 2E+I Forum at the Los Alijares Manoeuvres Field (Toledo) of the Infantry Academy and within the framework of the Force 35 initiative of the Logistics Support Command (MALE) of the Spanish Army. The Autonomous Platform ASCOD demonstrated its capabilities in an exercise designed by The Legion (Spanish Legion) to open a breach in a mine field, one of the most dangerous missions to be carried out. From a safe and protected position, the crew can drive and set the vehicle in position through the remote handheld multifunction driver display. The risk exposure to the crew in such situation is therefore significantly reduced.

The system provides the capacity for a remote and autonomous operation and being conceived as an add-on kit, it can be applied to newly designed ground platforms or transform conventional manned platforms into optionally unmanned platforms, a requirement that is increasingly in demand in the European Union and NATO for safe operations.

The ASCOD Platform Autonomous programme is a clear example of cooperation among the Spanish Defence industry, based on the technological excellence of both companies, GDELS Santa Bárbara Sistemas and SENER Aeroespacial, to respond to the needs of the Spanish Armed Forces and, at the same time, position itself in the international market in a highly competitive manner and contributing to the export capacity of the Spanish Defence sector.

At the Toledo Forum, GDELS-Santa Bárbara Sistemas demonstrated constant innovation in the concept of a multipurpose platform that serves to integrate advanced and disruptive technologies into a Network of Capabilities (ASCOD), which allows efficient operation and management of vehicular systems both conventionally and autonomously or supervised autonomously. The demonstration of these new technologies signifies a qualitative innovation leap in the development of mobility capabilities that go beyond the design and manufacture of armoured vehicles.

SENER Aeroespacial is responsible for the development of the platform’s real-time onboard navigation system, ensuring geolocation and real-time detection, identification, and positioning of elements in its environment such as the road, other vehicles, obstacles, signs. The system relies on a combination of multiple sensors. The data collected by these sensors is processed in a real-time processing unit where the merged and synergized data result in more reliable and robust information than those calculated by each of the sensors independently. Advanced data management techniques, information fusion, and artificial intelligence algorithms are used in the processor to process the images.

The programme is the result of a collaboration agreement signed by both companies in 2021 with the aim of developing, designing and manufacturing a modular and interoperable system for armoured platforms such as ASCOD as well as other wheeled or tracked vehicle systems.