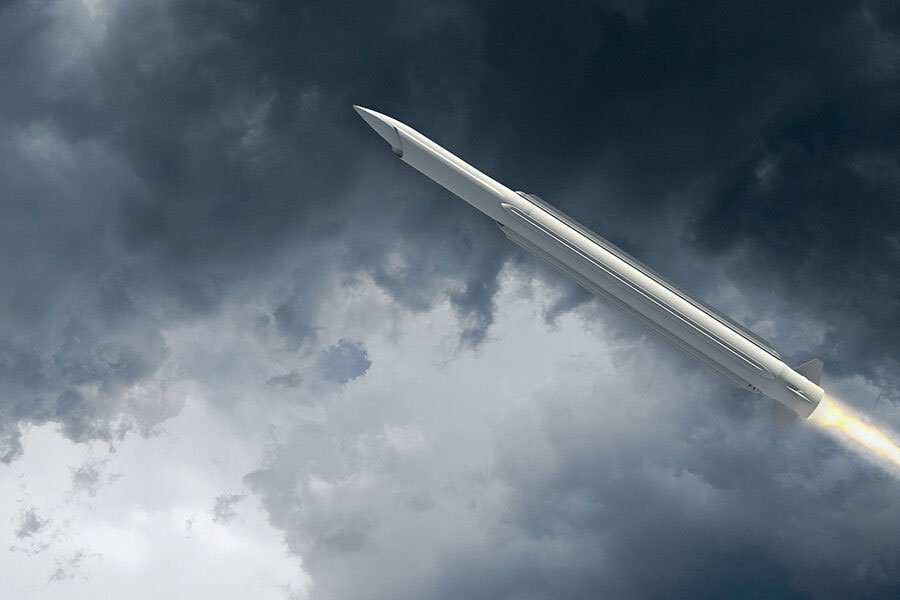 “The United States needs to be working closely with our allies to ensure our joint force has the most cutting edge capabilities on the battlefield,” said Heidi Shyu, Under Secretary of Defense for Research and Engineering. “I commend the THOR-ER team on their outstanding work weathering the pandemic environment, continuing the development of this significant propulsion technology, and promoting continued science and technology collaboration with our partners in Norway,”

The recent tests satisfied the THOR-ER Phase 1 objectives of demonstrating jointly-developed propulsion technologies in flight, including new high energy fuels, advanced air injection, and throttling methodologies which will be essential for mission flexible SFRJ systems of the future.

“The SFRJ flight vehicle was accelerated to above Mach 2 with the help of a solid rocket booster, and transitioned to ramjet mode. The flight phase was a resounding success with stable flight, robust ramjet operation, and a high thrust-to-drag ratio,” said Executive Vice President of Aerospace Propulsion at the Nordic Ammunition Company (Nammo), Stein Erik Nodeland. “The flights performed in accordance with pre-flight calculations, demonstrating a high-speed long-range trajectory. All in all, this is a real milestone. While not the first ramjet vehicle, it is the first modern ramjet, with a potential for a great improvement in range, time to target, and agility.”

The first flight, conducted on August 17, demonstrated an unguided vehicle with robust SFRJ operation across a wide range of altitudes and speeds. The second test, which focused on a high thrust flight profile, took place the following day. Both flights were considered successful, having demonstrating high supersonic speeds prior to ramjet burnout and splashdown. Programme officials will continue to evaluate system performance based upon telemetry and other data obtained during the test.

“Not only do the recent test firings at Andøya Space Flight Center mark a key milestone in terms of proving the THOR-ER propulsion technology, they also demonstrate the power of bilateral cooperation,” said Morten Tiller, Norwegian Armaments Director. “Through concerted efforts, key stakeholders in the United States and Norway have made significant progress that promises to increase both speed and range of air defence and missile systems. I am hopeful that the collaborative approach we have brought to the R&D, prototyping and test phases will continue into the industrialisation stage of the technology.”

“We believe that the SFRJ is going to be a game-changer for the US Navy and our Allied partners, and we are excited to see the successful THOR-ER flight tests,” said Stephen Farmer, Director for Advanced Concepts, Prototyping & Experimentation at Naval Air Warfare Center Weapons Division (NAWCWD). “We are also humbled in having this partnership with the Norwegian Ministry of Defence and Norwegian industry partner Nammo. We know that our combined team will continue to build on this success, and we are excited for what the future will bring.”

The THOR-ER programme builds upon collaborative research efforts involving the Office of the Undersecretary of Defense for Research and Engineering, the Joint Hypersonics Transition Office, NAWCWD, the Norwegian Defence Research Establishment, and Nammo.

“I want to congratulate the THOR-ER team on these wonderful tests. From a Nammo viewpoint, it underscores the importance of investing in competence and technological development. THOR-ER and ramjet technology can help our NATO partners with some of their most key priorities: range and precision.” said Nammo CEO Morten Brandtzæg. “I think this would not have been possible without the bilateral cooperation. In time, this might be the most important project Nammo has been involved in–ever–both industrially and in terms of military importance.

About the THOR-ER project and team: In April 2020, the US Department of Defense and the Norwegian Ministry of Defence jointly announced their partnership to develop advanced technologies applicable to long range high-speed and hypersonic weapons.