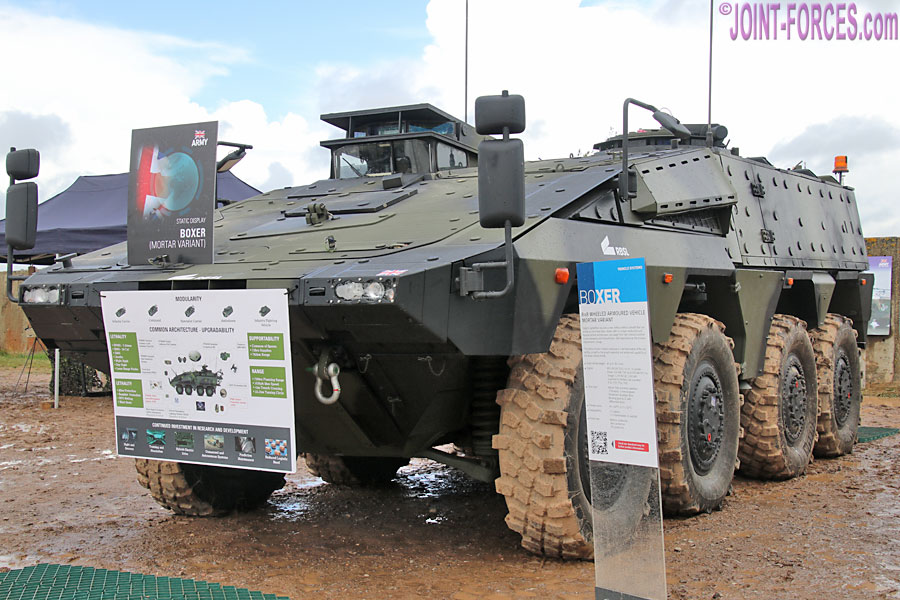 Press Release, Telford, 21 September 2022: Rheinmetall BAE Systems Land (RBSL) has demonstrated the ability of a BOXER Mission Module to successfully integrate and fire a mortar from the BOXER vehicle. This firing demonstration took place on Salisbury Plain and was the first time in which a mortar has been fired from a BOXER.

The integrated system demonstrated the BOXER vehicle, the Mortar Mission Module, a fully-automated aiming capability and the Mortar Weapon System (MWS) which has been developed by Rheinmetall Norway. On this occasion multiple 120mm mortar rounds were fired, demonstrating the ability of the BOXER to accommodate an updated capability for those users with smaller calibre in-service systems such as the 81mm mortar currently used by the British Army and many of her allies around the world. Whilst no 81mm mortar rounds were fired on this occasion the system is multi-capable, allowing either of the calibre weapons to be used as dictated by the operational requirement.

Overall system design and integration was conducted by RBSL engineers based in the company headquarters in Telford and the rapid production of this capability was made possible by close collaborative working with a number of industry partners. Manufacture of the mission module was also conducted at Telford by welders preparing for the serial production of those BOXER variants already on contract to the British Army under the ongoing Mechanised Infantry Vehicle (MIV) contract.

The need for mechanised infantry to have organic fire power is critical to mission success. This BOXER system delivers automated target acquisition and a high rate of fire (16-18 rounds/min) with rapid into and out of action – shoot and scoot. A semi-automatic mortar system can be fitted with a variety of mortar calibres and designs, enabling customers to use their current mortar systems or select their preferred future capability. The crew of four are able to operate in both day and night in all weather conditions, with a 270 degree rear firing arc. The Mortar System itself has also been demonstrated on light and medium vehicles enabling fleet wide commonality and reducing training and support burden.

The system can fire High Explosive, Smoke and Illumination ammunition, while the compact system design provides increased storage space for ammunition in the vehicle. The MWS also allows the mortar system to be dismounted and fire from the vehicle should the operational situation dictate it of should there be a requirement to revert to back-up functionality in the event of any system failure: in this way assured fire support can be delivered for soldiers.

Significantly developed at Telford, the BOXER mortar module can also serve as an example of the creation of sovereign intellectual property as part of Rheinmetall’s strategic vision in support of the UK MoD and wider economic prosperity agenda. The mortar capability, combined with BOXER’s battle-proven design, also provides a valuable opportunity for UK exports – driving prosperity for the UK.

RBSL Managing Director Colin McClean said: “This Boxer Mortar Mission Module, which was unveiled at DSEI last year, has been a UK lead design and development programme. We are really excited about the international interest in this new BOXER capability and look forward to working with customers to meet their individual needs.”

Editor’s Footnote: BOXER with RBSL Mortar Mission Module was displayed at DVD 2022, but as it was crammed in between other exhibits we have used photos captured at ARMY EXPO 2022 (a few hours before the announcement of the death of HM Queen Elizabeth II on 8th September) instead.