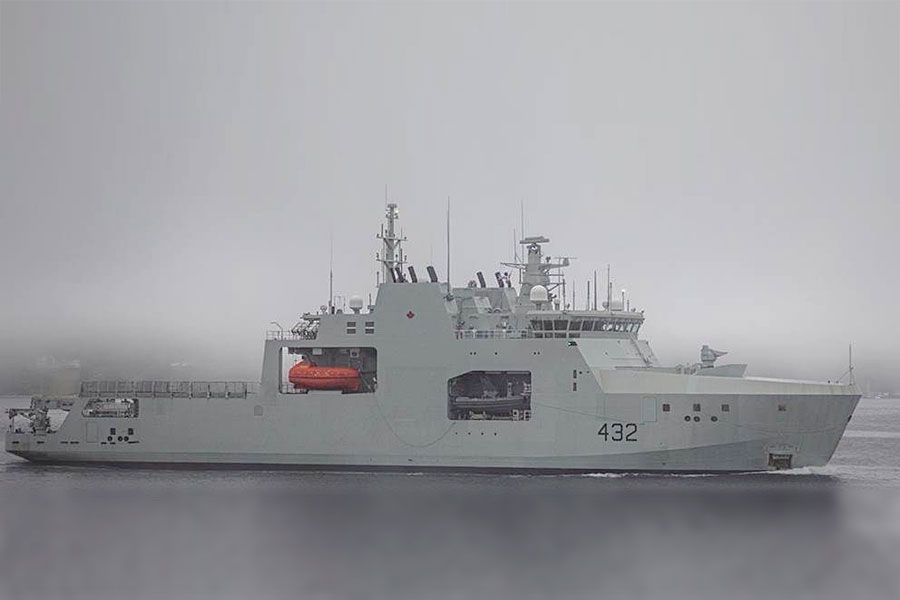 Built by Irving Shipbuilding Inc. of Halifax, Nova Scotia, this is the third of six new AOPS being delivered to the RCN through the National Shipbuilding Strategy (NSS), an initiative that supports Canadian industry and jobs. Designed with a thick and robust hull, the AOPS significantly enhance the Canadian Armed Forces’ (CAF) capabilities and presence in the Arctic, better enabling the RCN to assert and uphold Arctic sovereignty. With their considerable space to transport cargo and the capacity to embark a Cyclone helicopter, small vehicles, and deployable boats, the AOPS have the versatility to support a full range of CAF operations at home and contribute to global peace and security in coordination with our allies and partners.

HMCS Max Bernays will remain at the Her Majesty’s Canadian Dockyard Halifax while post-acceptance work and final ship preparation work are completed. In 2023, the ship will be transferred to the West Coast, with CFB Esquimalt as its designated home port. Construction of the sixth AOPS began with steel cutting on August 15, 2022.

In support of Canada’s defence policy, Strong, Secure, Engaged, the Government of Canada continues to deliver the modern, functional, and effective ships that the RCN needs to support operations, while also rebuilding Canada’s marine industry with the creation of hundreds of new jobs under Canada’s NSS.

“Today we celebrate another important milestone for the National Shipbuilding Strategy and the Royal Canadian Navy with the arrival of its third new Arctic and Offshore Patrol Ship, HMCS Max Bernays. I would like to recognise the important work of our shipbuilders and the thousands of Canadians that have contributed their time, expertise, and materials to support the construction of this new ship. Well done to everyone who has helped make this delivery a success.” The Honourable Anita Anand, Minister of National Defence

“For the third summer in a row, we are celebrating the delivery of an Arctic and Offshore Patrol Ship (AOPS). The HMCS Max Bernays marks an important milestone in the AOPS project as we have reached the halfway point in the delivery of these Royal Canadian Navy vessels. On August 15th, Irving Shipbuilding officially began production of Canada’s sixth and final AOPS for the Royal Canadian Navy. Our government recognises the exemplary work being done under the National Shipbuilding Strategy by Canadian shipyards and the economic benefits it generates in communities and across Canada.” The Honourable Helena Jaczek, Minister of Public Services and Procurement Canada

“Today’s delivery of our third Arctic and Offshore Patrol Ship, HMCS Max Bernays, brings the Royal Canadian Navy one step closer to our full fleet of six modern, ice-capable ships. Each of the AOPS represents a new and important capability for the Navy, and we are excited that this ship will soon be officially welcomed into the RCN Fleet.” Vice-Admiral Angus Topshee, Commander of the Royal Canadian Navy

“The delivery of HMCS Max Bernays – the third Arctic and Offshore Patrol Ship – is a proud and important milestone for our team of over 2000 skilled shipbuilders. Our commitment to Canada is continuous improvement. Despite HMCS Max Bernays being built during the height of the pandemic, the ship is being delivered faster with 8% fewer production hours compared to the previous ship – HMCS Margaret Brooke (AOPS 2). We wish the crew of this fine ship fair winds, following seas and a safe return home from every mission.” Dirk Lesko, President of Irving Shipbuilding