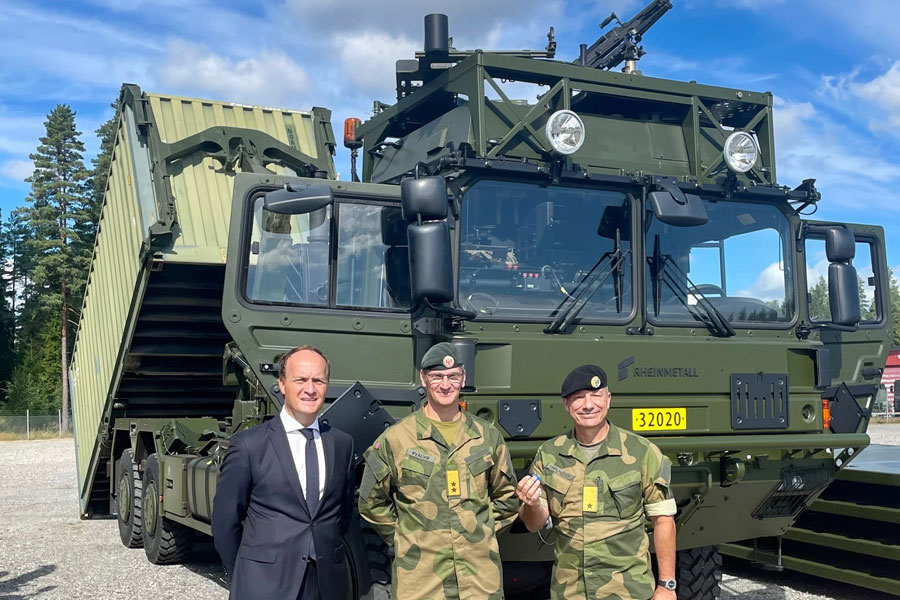 “We are proud to be able to transfer these state-of-the-art truck systems today to the most important people in the Norwegian armed forces – the troops!”, declared Michael Wittlinger, chairman of the board of management of Rheinmetall MAN Military Vehicles (RMMV) in a speech marking the occasion. “We are certain that these vehicles will satisfy Norway’s soldiers, providing them with the best-possible protection and support.”

The roots of the project go back to 2008, when a committee of Norwegian military officials drew up a list of specifications for new military logistic vehicles. Norway gave Rheinmetall MAN Military Vehicles (RMMV) the nod in 2013. Then, on 31 March 2014, NDMA and its Swedish opposite number, the FMV procurement agency in Stockholm, entered a framework agreement with RMMV to supply of military logistic vehicles, which runs through to 2025. Linked to this is an additional agreement encompassing long-term service support from RMMV. Rheinmetall MAN Military Vehicles is a joint venture owned by Rheinmetall AG, which holds a 51% stake in the company, and MAN Truck & Bus SE, which holds the remaining 49% share.

Michael Wittlinger went on to note in his speech that “this is RMMV’s most complex project to date. Our contract is not just with Norway but with Sweden, too. Owing to the special challenges of the Scandinavian operating environment, the technical specifications are very complex. Moreover, the order encompasses 38 different truck configurations and trailer variants, making this a very multifaceted programme.” Furthermore, each individual variant is subject to an extremely rigid and ambitious timetable for reaching milestones, with highly detailed lifecycle support documentation required at every stage. All of this goes way beyond the expectations of our other customers.”

The new vehicles are intended first and foremost to improve the transport capacity of the Norwegian military’s logistics corps, while simultaneously expanding the operational capabilities of its armed forces. This new high-tech family of vehicles fully meets the comprehensive requirements of its military users. Some of these trucks feature an integrated armoured vehicle cab for protecting the crew from ballistic threats and shrapnel. Furthermore, they can also be equipped with state-of-the-art communication and command-and-control systems as well as remote-control weapon stations.