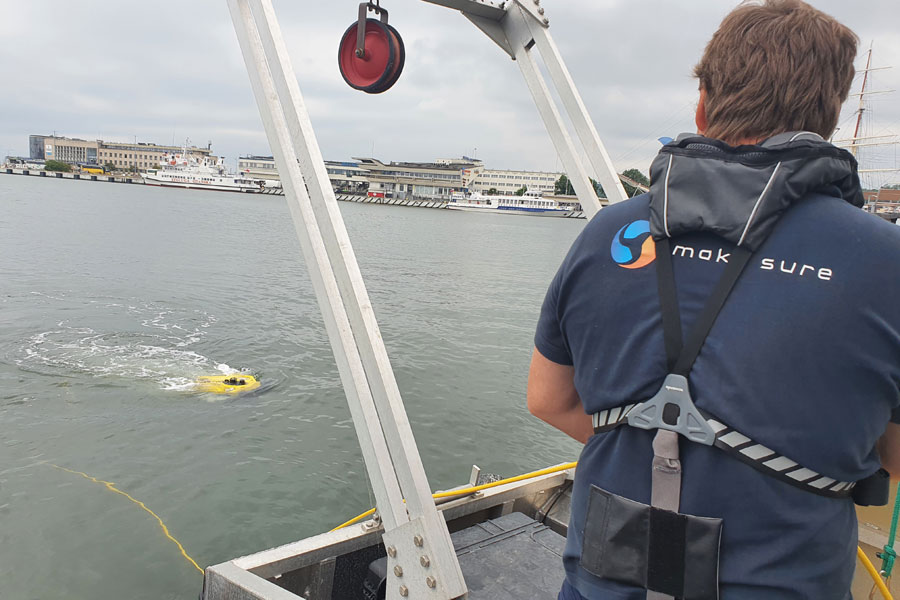 Hosted by their local partner THESTA, a Polish company providing maritime navigation services and communication systems for the defence sector, the demonstration was organised for the Polish Naval Academy and NAVSUP 2022 attendees with the aim of showing that accurate positioning of underwater targets is possible in a potentially hostile and fast-approaching environment, in coastal regions characterised by shallow waters and often limited access.

As part of the mission scenario, ECA Group’s R7 ROV investigated objects and structures submerged in the shallow waters of the Baltic Sea in Gdynia harbour. iXblue Gaps M7 USBL acoustic positioning system was deployed to geolocate the R7 ROV and correct its trajectory in real time. A fixed transponder was also placed several hundreds of metres away from the vessel, at only 5 metres deep. The trials were carried out in water depths of 7 to 10 metres, surrounded by many docks and vessels causing significant acoustic echoes.

Despite challenging acoustic conditions, the positioning of the ROV and the transponder was stable and accurate. Extremely efficient in shallow waters, Gaps M7 ensured excellent horizontal tracking capabilities with omnidirectional coverage and 200° acoustic aperture. With no calibration required, it was easy to deploy and ready to use, saving precious operational time on the field.

The ROV inspection was successful despite the low visibility. Such environments make the use of traditional cameras impossible, but the HD acoustic inspection camera performed remarkably, providing high-resolution data with superior localisation accuracy. The R7 combines the compactness and manoeuvrability of mini-ROVs with the performance and power of professional observation-class ROVs. It embeds a wide range of fast-equipped payloads and operates well under harsh sea conditions, making it the perfect ally of Navies for quick and efficient subsea interventions.

“The R7 ROV along with the Gaps M7 USBL acoustic positioning system is able to transmit information accurately, even in noisy and difficult acoustic environments. They both enable fast operation as well as regular and quick position updates, even in very shallow waters, which is a definite asset for the navies, given their need for a fast, clear and concise picture of the battlespace to quickly manoeuvre naval forces in the field.” says Cezary Majchrowicz, Technical Director at THESTA.