Boeing and US Navy Demonstrate MUM-T With Super Hornet 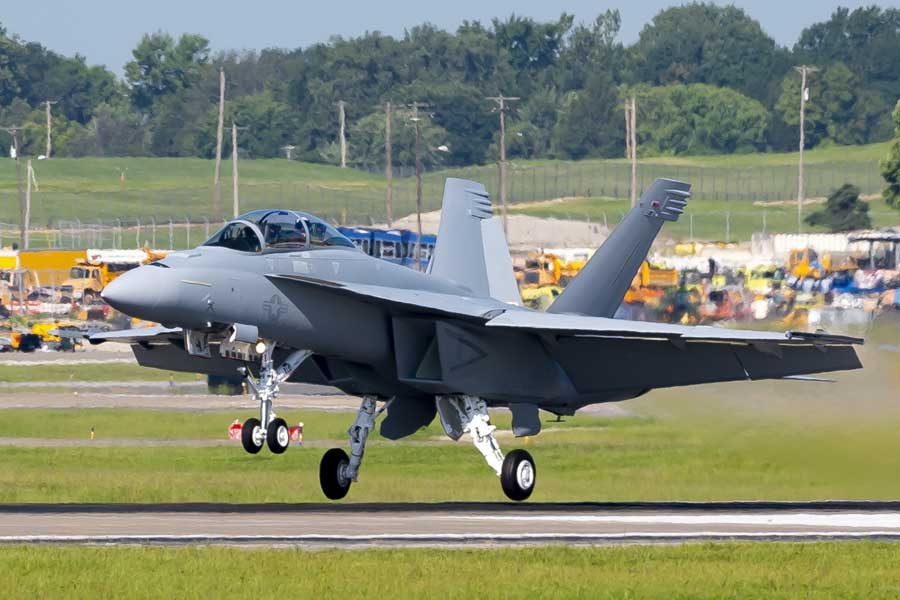 A Block III F/A-18 Super Hornet takes off from Lambert International Airport in St. Louis. As the most advanced Super Hornet ever built, the Block III is equipped to run the app-based solutions of the future [©Boeing: Eric Shindelbower]

Boeing and the US Navy have demonstrated Manned-Unmanned Teaming (MUM-T) with a series of Block III F/A-18 Super Hornet flight tests.

Boeing system engineers connected Block III’s adjunct processor, known as the Distributed Targeting Processor – Networked (DTP-N), with a third-party tablet to team with the UAVs. Boeing developed new software loads for the DTP-N specific to running the third-party tablet and transmitting commands. The software development, tablet connection to the fighter and all flight tests were completed in less than six months.

Boeing partnered with the F/A-18 & EA-18G Program Office (PMA-265), Air Test and Evaluation Squadrons (VX) 23 and 31, Naval Air Warfare Center-Weapons Division at China Lake, Calif., and a third-party vendor on the demonstration. During the test flights, F/A-18 pilots entered commands into the tablet, which were processed and transmitted through Block III’s hardware. The UAVs executed all commands given by F/A-18 pilots during tests over a two-week period.

“This successful MUM-T demonstration represents a significant step toward the Navy’s vision for Distributed Maritime Operations. It highlights the potential of unmanned concepts to expand and extend the Navy’s reach,” said Scott Dickson, Boeing’s director for Multi-Domain Integration. “As part of a Joint All-Domain Command and Control network, teams of UAV conducting ISR missions led by the latest Super Hornets equipped with network-enabled data fusion and advanced capabilities would provide warfighters across the Joint Force with significant information advantage.”

With the largest digital touch screen in any fighter cockpit, the F/A-18 is an industry leader in the development and installation of the hardware and processing power needed for future digital capabilities and growth. The adjunct processor running the demonstration adds significant processing power to the F/A-18’s mission processing suite.

“Future fighter pilots will be the quarterback of the skies, orchestrating commands and controlling UAVs from the integrated Block III touch-screen cockpit,” said Mark Sears, Boeing vice president and program manager of F/A-18, EA-18G programs. “Block III Super Hornet is the bridge to the future and is a risk reducer for the Navy that is delivering on teaming, networking and interoperability now.”