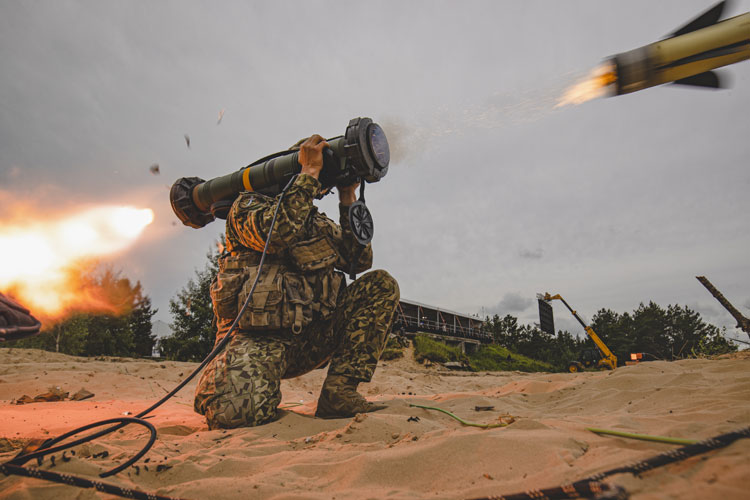 The 17th annual Spike Users’ Club Meeting was held recently in Latvia after an enforced break caused by the COVID-19 pandemic.

Press Release, Tel Aviv, 14 July 2022: Last week, the SPIKE Users’ Club held its annual meeting for the first time since the start of the COVID-19 pandemic. For sixteen consecutive years, the SPIKE Users’ Club Meeting (SUCM) had been held in different host countries around the world; now, after a two-year break due to the pandemic, the meeting was held in Latvia.

RAFAEL Advanced Defense Systems, the NATO Support and Procurement Agency (NSPA), and SPIKE Missile Family’s global users came together for a collaborative, face-to-face engagement to strengthen their wider relations and cooperation. Founded in June 2003 by SPIKE user nations, the SUCM has become a unique forum for sharing their practical knowledge and experience using SPIKE missiles, as well as addressing tactical lessons learned from combat scenarios, through maintenance and live-fire trainings.

Developed and produced by Rafael Advanced Defense Systems, the SPIKE Missile Family now features the world’s first 6th generation ATGM missile: the SPIKE NLOS. Unveiled last month, the SPIKE NLOS 6th generation missile features extended ranges, salvo controls, system handover and target image acquisition. Today, these precision electro-optical missiles are used by 39 nations, including 19 EU and NATO members. Until today, more than 7,000 SPIKE missiles have been fired in training and in combat scenarios around the world. Thanks to missile and launcher cross-nation commonality, the Users’ conference continues to be an excellent platform for maintaining the nations’ interoperability. The Users’ Club enables nations to manage joint procurement and mutual support in supply, including during long-lasting conflicts.

This year, SUCM’s 17th meeting was jointly organized by host user-nation Latvia and the NSPA. It included 19 SPIKE User delegations, and observer nations that participated for internal study purposes. During the SUCM, the Latvian Army launched four SPIKE missiles: two SPIKE LR2 missiles were launched from a portable ground launcher, with one of them launched towards a target beyond-line-of-sight at 5.2 km with the use of the target image acquisition capability. Both missiles hit their intended targets (both in IR and day mode). Additionally, two SPIKE SR shoulder launched fire-and-forget missiles were launched at target at a distance of 1.5km. The innovative SPIKE FIREFLY miniature close combat loitering munition was also demonstrated, extracted from a canister by the manoeuvring infantry, in vertical takeoff it engaged targets beyond-line-of-sight. Days before the SUCM, a Latvian Army squad was instructed how to operate the SPIKE FIREFLY and took part in the demonstration. Earlier this year, SPIKE FIREFLY was also demonstrated in the United States at AEWE to US and UK military services among others.

For RAFAEL, SUCM also served as an opportunity to illustrate the past few years of innovation since the most recent Users’ club meeting in Slovenia in 2019. In addition to the unveiling of the SPIKE NLOS 6th generation missile, RAFAEL presented other new technologies for SPIKE user’s maximized survivability.

Brigadier General Kaspars Zdankovskis, Acting Chief of Staff, Latvian Armed Forces: “We were very pleased to host 17th SPIKE User Club in person this year in Latvia, especially after the long COVID break. It is very important that User nations have the possibility to come together, share their experience, challenges and discuss the future. The Users’ conference is an excellent platform for maintaining the nations’ interoperability, enabling the nations to manage joint SPIKE missile stockpiles, joint procurement and mutual support in supplies. SPIKE family systems are the key capability for the Latvian Armed forces and the long-term cooperation with the NSPA and relevant industries is an absolute military requirement.”

Tzvi Marmor, Vice President and Head RAFAEL’s Precision Tactical Weapons Directorate: “The return of the SPIKE Users club is another indication of the relevance of the system especially in the modern security context. It was an honour to again cooperate with our partners and the global customers. We thank all the delegations for coming and particularly the NSPA and our partners in Latvia for their warm hospitality, high level of professionalism and great coordination leading to a successful event.”