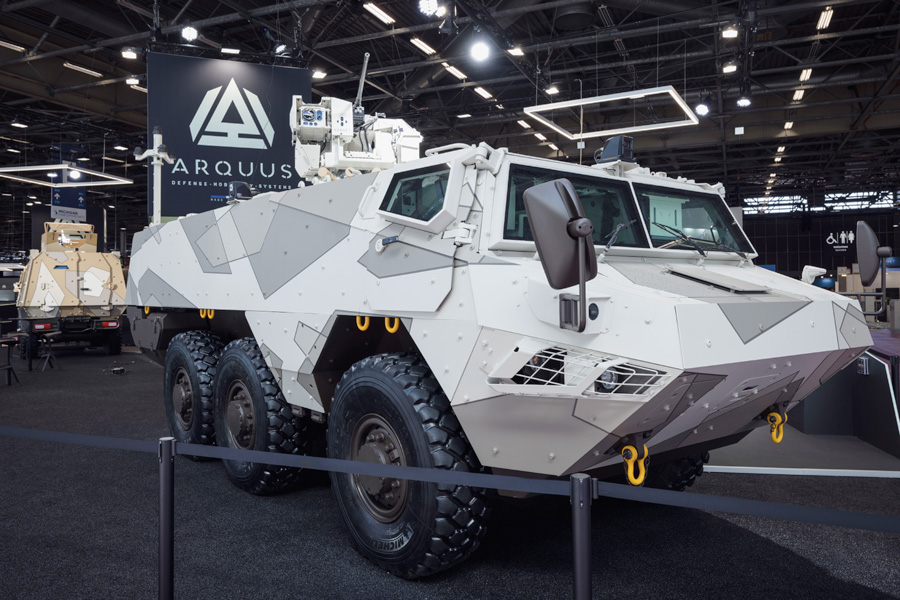 Press Release, Paris, June 2022: The VAB Mk3 is Arquus’ flagship on the 6×6 market. Already in service and combat-proven in various armies around the world, it is a modern APC/IFV that Arquus constantly upgrades to better answer the operational needs of the operators on the battlefield.

The VAB MK3 is a very agile and well protected vehicle, which can serve as an APC or an IFV depending on the mission at hand. Its very compact architecture and low silhouette makes it a vehicle very well adapted to high-intensity conflicts against opponents equipped with multiple reconnaissance and aggression solutions. This concept proves once again its validity as modern combat vehicles tend to grow taller and bigger, which increases their visual signature on the battlefield.

At Eurosatory 2022, Arquus presents the VAB MK3 in a systems-ready configuration, with a wide array of systems that are highly relevant for modern-day operations and benefit from the close examination of recent combat experience. These systems add up to the native qualities of the VAB MK3, which is a very-well protected, versatile, and very mobile vehicle.

Hornet Stealth Protection: The VAB MK3 exhibited on the Arquus booth first demonstrates the Hornet Stealth Protection by Hornet, which ensures the vehicle’s self-protection, as well as collaborative protection for the whole task force. The Hornet Stealth Protection combines a Hornet Remote-Controlled Weapon Station (RCWS), an independent ring mounted on the Hornet and fitted with a GALIX smoke grenade launcher by Lacroix, a Pilar V acoustic gunshot detector by Metravib and finally the Battlenet vehicle and systems sensors and effectors software management system, which links all sensors and equipment and provides with combat and collaborative protection and combat capabilities. Upon detection of a threat, the Stealth Protection System warns the operator and automatically orients the GALIX smoke grenade launcher to face the threat, as well as the Hornet RCWS if the operator elects that option. The smoke grenade launch is then conducted manually or automatically, depending on the selected mode, effectively screening the vehicle from incoming targets. As the GALIX smoke grenade launcher is fitted on an independent ring, the operator can keep focusing on his current mission, either monitoring a sector or firing at a target, while the Stealth Protection System takes charge of the protection of the vehicle from the other threats. The system loads a total of two salvos, to be able to react to two consecutive targets incoming from identical or different directions. This solution can also integrate a laser detector warning system to add further detection and protection capabilities.

Situational Awareness: The VAB MK3 is also equipped with 360-degree low-light and thermal imaging cameras by Bertin Technologies that provide the crew with a full 360-degree situational awareness and the vehicle with night driving capabilities. The cameras and corresponding screens benefit from a very low response time which facilitate nighttime operations. This array also integrates a thermal mode which switches on extremely quickly, allowing for smooth transitions from one mode to another. The VAB MK3 also integrates a wire solution for drones, provided by French company Arastelle that enables continuous surveillance capabilities while in operations. That solution connects the drone to the VAB MK3’s energy network, thus ensuring a constant supply of power and an air surveillance, which is a major advantage compared to the natural limits of drones, which currently only rely on their own battery. This innovative solution developed by Arastelle and integrated by ARQUUS allows the drone to remain in flight for as long as desired up to an altitude of 100m, reinforcing the surveillance and observation capacity by day and night. This solution offers higher performance than a mast, with a much smaller footprint, while providing additional tactical options for the UAVs deployed, which are also capable of evolving wirelessly to fulfil other missions. This compact system, which can be integrated into all types of new or retrofitted vehicles, will provide ground resources with an aerial capability and enable a micro-UAV to be deployed in 15 seconds with an automated take-off and landing procedure. Such a system is very well adapted to the needs of infantry squads, which can use their own current drone without having to modify or adapt them. It is particularly relevant in the context of surveillance of a forward operational base or a long-term reconnaissance mission. The Arastelle solution completes the set of systems integrated on the Arquus VAB MK3, providing it with a vision capability beyond direct sight.

Virtual Windows: All these systems are already qualified and available. On top of them, Arquus adds a solution currently under development by its Advanced Innovation team, which provides with very important gains in terms of observation and situational awareness. At Eurosatory 2022, Arquus presents its Virtual Windows solution for armoured vehicles. This solution aims at projecting the 360° vision from the vehicle cameras, or the vision from the drone, or any video feed directly inside the vehicle thanks to small projectors with very small response time. The Virtual Windows help with the crew’s situational awareness, by having them being able to see what the surroundings look like, which prevents spatial disorientation during the long operational drives in changing environments, especially right before disembarking. Such a solution also enables all crew members to actively take part in the surveillance of the battlefield, which can be of use for reconnaissance units. It also enables precise on-board briefings, with a display of tactical situations directly on the vehicle’s hull. Information such as cover, general tactical situation, red and blue force tracking are thus much clearer. Virtual Windows also enable the complete removal of windows on the vehicle, which reinforces the general structure for more protection, reduces the weight and simplifies production and maintenance operations. The integration of the Virtual Windows by Arquus thus allows for more protection, facilitates the production, maintenance and repair of vehicles, while alleviating the mental load for the operator, who can focus on his mission from inside the vehicle thanks to Battlenet.

Arquus’ systems and sensor management system, Battlenet connects all the integrated systems on a plug-and-play basis, thus simplifying all operations inside the vehicle and automatising some functions, such as smoke grenade launches, target tracking and aiming… It also multiplies the capabilities of vehicles in collaborative combat: automatic information exchange, sharing of tactical situations, red and blue force tracking, collaborative protection and combat…

A mature version very adapted to high intensity operations: All these integration on the VAB MK3 of ever more efficient systems illustrate Arquus’ ability to respond to changing tactical challenges and provide the armies with sensible solutions which provide actual operational value on the field.

The VAB MK3 is thus presented in a configuration that is highly adapted to current conflicts. The Ukrainian crisis has reminded us of the reality of high-intensity operations, where well-protected, highly mobile vehicles are crucial, as well as their ability to identify the enemy before being detected and react as quickly as possible to the most dangerous threats. The VAB MK3 meets these needs perfectly.

ARQUUS, Eurosatory 2022, Featured, VAB, VAB MK3
You may also like