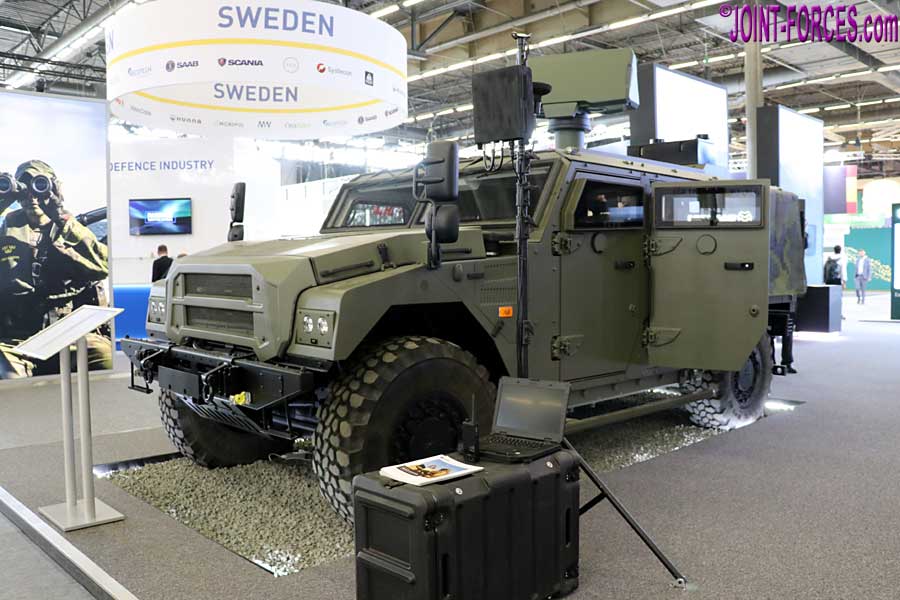 Arquus and Saab presented a Sherpa Light Scout in a CBRN (Chemical, Biological, Radiological and Nuclear) configuration at Eurosatory 2022.

Many Defence and Security forces all around the world are indeed looking forward to reinforcing their fleets of CBRN-protected vehicles or to upgrade their current fleets to the latest standards of protection. To illustrate possible answers to these needs, Arquus and Saab are presenting jointly on the Saab booth at Eurosatory 2022 a Sherpa Light Scout by Arquus equipped with a CBRN solution by Saab.

Saab’s CBRN Reconnaissance Vehicle Kit (CRVK) is a cost effective, modular, reversible and dual-use solution to modify a standard vehicle to support CBRNe reconnaissance. The kit consists of three main parts, which have been adapted to simplify installation. With CRVK, it’s possible to create an automatic reach back capability where remotely grouped specialists can control the sensors to support the frontline CBRNe team.

Identification of substances can be performed to Presumptive and Field Confirmatory level. This creates an advanced and highly mobile CBRNe vehicle that can support the following missions: reconnaissance, survey, surveillance and monitoring.

On top of its CBRN solution, Saab will also display on the Sherpa the following products: lightweight 3D radar Giraffe 1X, multispectral camouflage solutions from Saab Barracuda, both fixed and mobile, as well as some vetronics and laser detection technologies. The integration of these solutions is a reminder of the versatility of the Sherpa Light and its relevance for modern-day military operations, both in contested and non-contested environments.

The Sherpa is a multipurpose, 4×4 armoured vehicle, designed by Arquus to provide with a wide array of versions and customisations for all needs and missions, built on a single, proven base for increased commonality and ease of maintenance. The Sherpa offered is a modern, new-generation vehicle, which is built on many years of industrial experience, operational deployments on the battlefield and maintenance. It notably benefits from a new engine and an improved mobility, both on and off-roads.

The Sherpa family is currently comprised of four base models: the Sherpa Scout, an armoured vehicle for liaison and reconnaissance seating 4 or 5 soldiers; the Carrier, fitted with a bed for troop or systems transport; the APC, for troop protected transport; and the Sabre, designed for the needs of the Special Forces. In its different versions, the Sherpa can tackle most missions and carry most of the equipment of the Defence and Security forces.

NATO and French-Army qualified, the Sherpa Light is a vehicle of choice, already deployed on all theatres of operations and in all configurations, and combat-proven on several occasions. More than 1,200 Sherpa Light vehicles have already been ordered and delivered, a milestone which crowns the quality of design, versatility, and durability of the Sherpa.