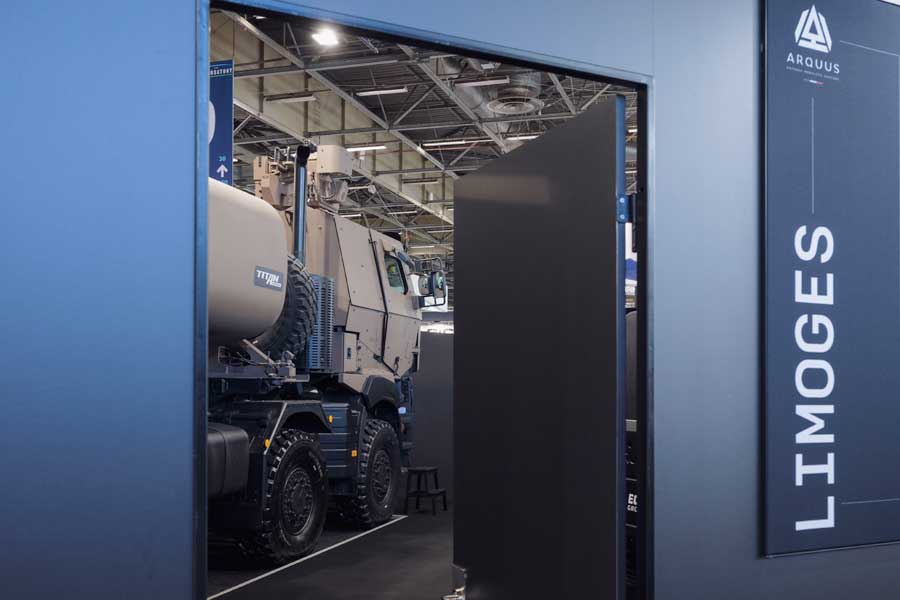 Arquus brings together the French military truck team around its Armis 8×8, presented today at the Eurosatory defence expo in Paris.

Press Release, Paris, 16 June 2022: In order to anticipate the renewal needs of the armed forces’ tactical and logistical carrier fleets, Arquus has developed a brand-new range of trucks using its own funds. The result of Arquus’ know-how in the design, development and support of tactical and logistic vehicles, the Armis family consists of three trucks: the Armis 4×4, the Armis 6×6 and the Armis 8×8, all developed on the same basis.

At Eurosatory 2022, Arquus presents its Armis 8×8, a French truck, designed and developed in France by a French team of military trucks expert. This new generation heavy truck is presented here in its protected tanker configuration, equipped with an 18m3 tank supplied by Titan Defense. Next to the truck is a driving simulator developed by ECA, whose parameters have been adapted to the military environment, in order to illustrate the training capabilities of ARQUUS. This very coherent set of equipment allows for the best possible exchange on the future of land logistics. The Armis 8×8 is also equipped with a Hornet Lite RCWS for close-range self-protection.

To create this new Armis family, Arquus has united a French team of military trucks experts, made up of Arquus, Renault Trucks and Soframe (Lohr group). This French team combines the expertise of Arquus, Renault Trucks and Soframe in the design, production and integration of Defence vehicles and systems, for the benefit of logistical and tactical land mobility. This choice of engineering, which brings together unique skills under the control of Arquus, makes it possible to offer very high-level performance, very well adapted to the specific needs of the armed forces, at the best price. It also ensures the greatest commonality in the range, guaranteeing simple handling, easy maintenance and common configuration management.

The development programme for the Armis range is well underway and is already at a very high level of maturity. The teams of Arquus and its partners are fully mobilised to respond perfectly to the needs of the armed forces, both technically and in terms of support over time.