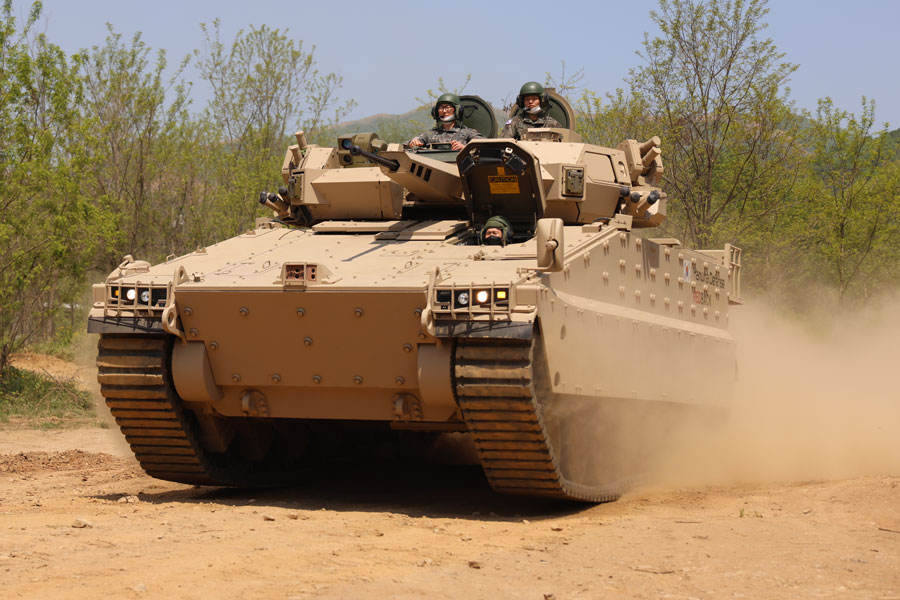 Press Release, Seoul, 29 May 2022: The Redback Infantry Fighting Vehicle (IFV), developed by Hanwha Defense, has demonstrated its outstanding performance during a media invitation event held on May 27 at an Army unit.

The event took place at the end of the Republic of Korean Army’s six-week-long trial of the next-generation IFV. The ROK Army trial followed the Redback’s successful tests and evaluations last year under the Australian Risk Mitigation Activity to select the preferred bidder for the LAND 400 Phase 3 project aimed at acquiring about 400 next-generation IFVs. During the media event, the tracked armoured vehicle impressed the audience by showcasing its off-road manoeuvrability through an obstacle course, including a ramp and a muddy puddle of water. The vehicle also performed its pivot steer; turret rotation; and troop dismounting.

“The reliability and sophisticated technology of the Redback IFV has been proved during the latest ROK Army trial run of the vehicle, which is expected to be a strong basis for the Redback’s international sales and marketing,” said Brig. Gen. Cho Hyun-ki, head of the DAPA’s Manoeuvre Programme Department.

“Domestically, we consider acquiring a Korean version of the Redback meeting the ROK Army’s operational concept and capable of featuring technology and performance required by the service, under a fast-track research and development programme,” Cho added. “With this approach, the ROK Army will be able to deploy next-generation IFVs earlier than schedule, which will contribute to improving the service’s capability to deploy and sustain armed forces.”

Hanwha Defense is on track to meet the potential demands of the ROK Army, as the company is scheduled to conduct the durability testing on the Redback’s manoeuvrability on the Korean terrain from August this year. The testing is to cover around 10,000 kilometres of driving on rough terrain as well as on paved and unpaved roads.

The Redback is also receiving strong attention from the US and European markets. The Oshkosh Defense Consortium, including Hanwha Defense USA, is trying to leverage the proven capability of the Redback for the US Army’s Optionally Manned Fighting Vehicle (OMFV) design effort. Several European nations have also shown in the Redback for their IFV acquisition programmes.

“The Redback demonstrated its overwhelming performance during the final tests and evaluations in Australia, and the latest trial run of the Redback for the ROK Army proved the vehicle’s all terrain capabilities and reliability,” said Lee Boo-hwan, Vice President of Hanwha Defense’s Overseas Department. “We’re confident in the Redback’s competitiveness in the global IFV market.”