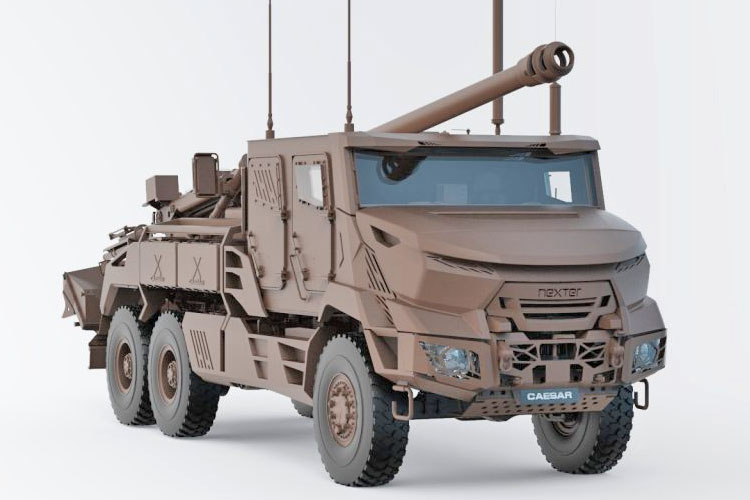 The Belgian and French Ministers of Defence have signed CaMo 2 for the purchase of nine CAESAR New Generation 155mm SPH artillery systems.

Press Release, Brussels, 13 May 2022: [auto-translated] Defence Minister Ludivine Dedonder signed the CaMo 2 intergovernmental agreement with her French counterpart, Florence Parly, confirming the strategic partnership between the two countries and their desire to work towards European defence. This agreement includes the acquisition by Belgium of nine information-valued CAESAR NG systems (CAmion Equipped with a New Generation Artillery System) whose delivery is scheduled for 2027. The acquisition contract will be notified in the coming weeks by the French Directorate General for Armaments (DGA), in the name of and on behalf of Belgium.

In addition to the operational component, including joint training and integrated training (‘plug and fight’ concept between Belgian and French combat units), this agreement includes the acquisition by Belgium of nine computerised CAESAR NG. This also includes hardware for Communication and Information Systems (CIS), hardware and software needed to integrate artillery pieces into the infovalued network, tooling, documentation and accompanying material, such as that of ammunition programming, additional independent hardware and software to independently control firing elements, etc. The total Belgian investment budget amounts to 62 million Euros.

The CAESAR NG is a 6×6 equipped with a 155mm gun with a length of 52 calibres, allowing firing up to a distance of 40 km. The production of our nine CAESAR NGs will be carried out in continuity with the production of those of the French Army, so that the opportunities for cooperation with our French strategic partner can again be used optimally.

The new generation of CAESAR retains the current configuration of the artillery system, which has proven itself in operation (more than 100,000 shots since 2009). The main improvements relate to crew protection and mobility. To this end, a mine- and bullet-proof cabin is added. It can withstand improvised explosive devices and small calibre ammunition. In addition, the mobility of the vehicle has been completely redesigned by Arquus. The CAESAR NG is equipped with a new engine (460hp instead of 215hp previously), a new automatic gearbox and a new chassis. Finally, the CAESAR NG is equipped with the latest version of the fire control software and the cabin is prepared to accommodate the new CONTACT radio (infovaluation – communication and data network within the CaMo). The Thales BARAGE jammer can also be installed on the CAESAR.

Current artillery will evolve into a long-load precision indirect fire support battery based on air-transportable wheeled vehicles, a shorter-load indirect fire support battery based on current 105 mm artillery pieces and, in addition, a battery of sensors composed of radar operators, forward observers and the necessary liaison elements with the supported units.

CaMo 2 follows on from the first part which came into force in 2019, by deepening this unprecedented European cooperation in the field of defence for maximum and long-term interoperability between the two armies. The CaMo partnership as a whole is carried out under the aegis of the Belgian Land Component, the French Army, the Belgian General Directorate of Material Resources (DG MR) and the French General Directorate of Armaments (DGA ).