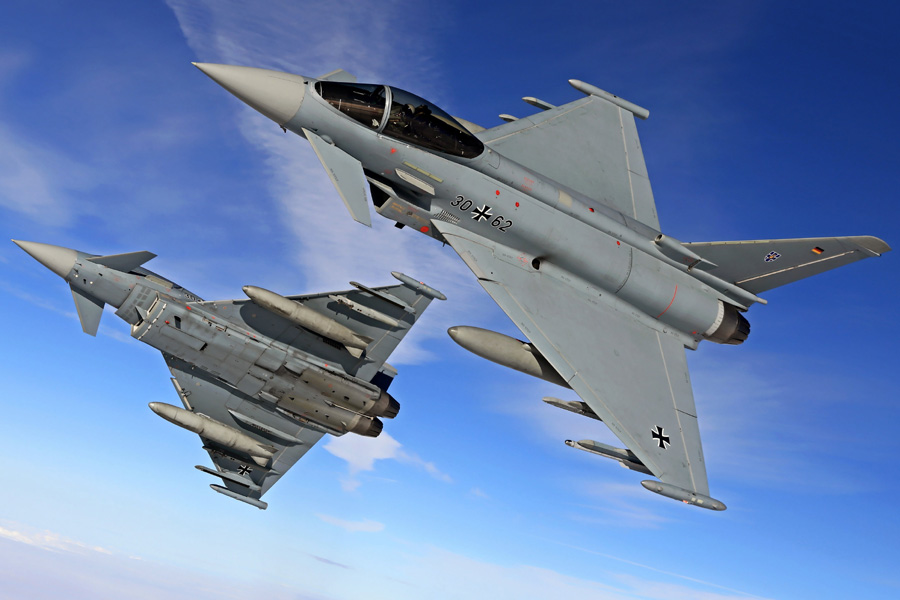 The aircraft of the four Eurofighter core nations will continue to be serviced by HENSOLDT Customer Services in the areas of radar, avionics and self-protection systems [© HENSOLDT AG: Stefan Petersen]

Sensor solutions provider HENSOLDT has been awarded a mid-three-digit million Euro contract for the next phase of Eurofighter maintenance.

Press Release, Ulm, 29 April 2022: Sensor solutions provider HENSOLDT has been awarded a contract worth a mid-three-digit million euro amount for the next phase of Eurofighter maintenance. The contract covers service tasks for HENSOLDT’s share of various Eurofighter systems in the areas of radar, self-protection and avionics. HENSOLDT’s service contributes to the desired increase in the number of Eurofighter flying hours.

The full service flight hour contract is organised through consortial partnerships in the four Eurofighter core nations (UK, Italy, Spain and Germany) and mandated through several national contracts via the Eurofighter partner companies (Airbus GE, Airbus SP, BAE Systems UK, Leonardo Aircraft Division IT). HENSOLDT is the national leader of the Radar- and DASS- (Defensive Aids Subsystem) Consortium for the service of the German user until the end of 2026 and is also the service and consortium partner for the other nations.

When the contract comes into force, the assemblies of the four Eurofighter core nations with their total of approximately 500 aircraft will be maintained by the HENSOLDT sites in Ulm, Friedrichshafen, Taufkirchen, Neuburg and Laage. The German sites in Neuburg and Laage have TDCs (Technical Diagnostic Cells). Here, HENSOLDT technicians repair radar and self-protection components of the German Eurofighters on site in the shortest possible time. In addition, the Radar Automatic Test Equipment (RATE) system developed and supported by HENSOLDT is used in all Eurofighter nations. It supports the technicians on site both in troubleshooting and in the final re-certification of assemblies for flight operations after repairs have been carried out.

Eurofighter, Eurofighter Typhoon, Featured, Hensoldt, Maintenance
You may also like